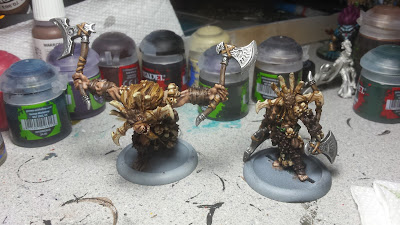 Kromac was kind of a bear to paint, since he's two models and they both share details. That meant I needed to paint up one and then the other and jump back and forth a bit, rather than focus one miniature down at a time.

One other issue I had with him was his armor. It just seemed strange to me and it was hard to tell what was leather, fur or something else. 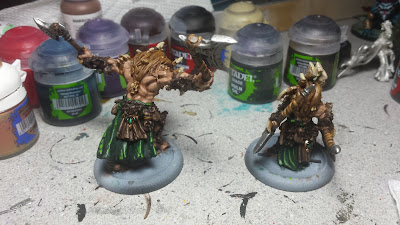 Overall though he's a pretty sweet set
of minis. They turned out pretty solid and I even used the gemstone paints on them. I still need to do the bases and paint the arcs on them. But I'm going to do that after all of the Circle minis are done (I also need to find me template that I made for marking arcs again). 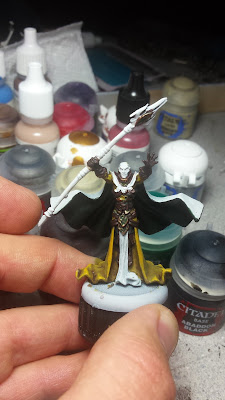 As for base details, I have a few ideas for that as well. But it requires a trip to the hobby shop, which will need to wait until after the holiday weekend.

Next up we have Krueger. I've always wanted to paint up this guy and compared to Kromac, he's a whole lot simpler on the details too. Though in order to paint him properly I needed to crack a few glue joints.

He also has some lacquered bronze armor on him, which I wasn't sure on how to paint up. But luckily, my buddy Chris was able to send me the tutorial for it from one of his Privateer Press Books.

That's it for now though. I won't likely be able to get much paint time in for the rest of the weekend. But, it's going to be a busy next few days.

I am taking Tuesday off of work though, and plan to play with paint all day long to get soem more headway done on these. Be sure to check back here or you can catch me on Twitter or Instagram as well.