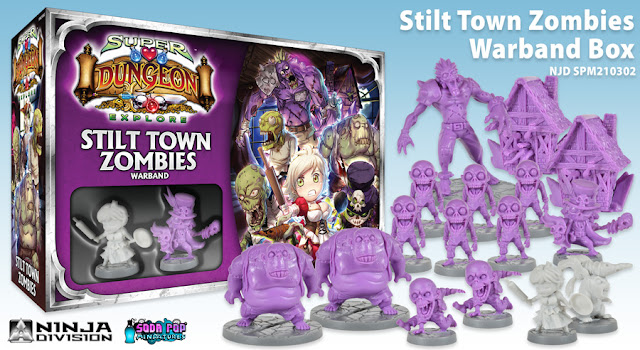 We're going to try something new on this post. I'll be organizing the pictures differently, then I'll talk about the model itself and then a bit about it's mechanics. It's totally going to be a live-fire test, so lets all hope we don't blow a hand off... the zombies might run off with it.


Now that the goody goodies are out of the way, it's time to dig into the new Grabby House spawning point.

When this set first came out, I was like "great a zombie set, everything has to have zombies now-a-days". I could say that I wasn't too hyped for them, but I did like the addition of Marie-Claude's hero and thought she was pretty solid. Even after looking over the cards and trying to see how well they'd mesh with the other Von Drakk horror themed minis, I wasn't sure on them.

This is a Paired Spawning Point, which means it won't be run with the skeletons from Von Drakk very often, unless it's a 4-5 hero game. That leaves the Pumpkin Patch solo spawning point as the only viable theme option for playing a all horror game, when running a 3 hero game.

I like synergy in my troops, and that may be from years of playing Magic or other games. But when looking at the Stilt Town Zombies with the rest of the Von Drakk stuff, I just wasn't sure where that synergy was going to come from.

That was until  I played this last Tuesday. I hadn't realized that the Prowler's Homunculus ability targeted Witches. And in the beta rules for SDE 2.0, you can spawn any monster from the spawning pool that you want out of any spawning point. That's when I realized that the witches from the Pumpkin Patch point were a great fit with the zombies, as I can use the witches to get in and toad heroes then use the prowlers to heal them.

This was even better when I realized that Homunculus can target Beatrix the Witch Queen as well and that I can pop out two Prowlers and the Shamble Priest at timeout and then pop out more zombies to keep the heroes at bay, while I Homunculus attack to heal Beatrix back up.

It's a thin synergy link, but it was enough for me to really dig running them.

As for gameplay. Super Dungeon Explore is all about the heroes attacking the dungeon and getting the boss to spawn on their terms. The zombies slow the party's movement down considerably, thanks to Grabby. If the first tile they are in contains a Grabby House (under Forgotten King rules), or the Spawning Pool contains the zombies (under 2.0 beta rules), its possible that they will struggle to plow through the first point and race to the second.

In our game using the beta rules, which feature the Might Monster Chart that acts as a timer counting down to an automatic boss spawn, the heroes never even got out of the first tile. That chart is 12 rounds long too. That's a lot of time bogged down by zombies thanks to Grabby.

Overall, I think this is a pretty solid addition to the game. Gruesome George was fun to use and the zombies add another tool in the Dark Consul's bag to hinder the heroes progress. But I can totally see players groaning if the zombies come out too often, as they can slow the game down. And under Forgotten King rules where its all about popping spawning points as fast as possible to get the boss out, I can see it adding a lot of time to the game. The fastest I've ever played SDE 3 Heroes under Forgotten King was 3 hours, I haven't tried it with zombies yet.

This isn't as much of an issue under the new 2.0 Beta rules since the Mighty Monster Chart sets a timer on the game and as soon as the boss spawns, monsters stop spawning and it's boss fight time right here, right now.

Would I suggest picking it up? Well if you're an SDE fanatic, like I am, I don't even need to answer that question. But if you're just starting out and looking to add a bit of variety to the monster pool, I'd say maybe. I would suggest picking up Von Drakk Manor before picking up Stilt Town Zombies, as it adds to the horror vibe as well, but gives you enough models to run a 3 hero horror themed game without cobbling in a single spawning point from a different region of Crystalia.

Either way, I'm happy with all the sculpts and game mechanics in this set. Sure some of them were a bit of a chore to paint than others. But you'll have that with anything, really.