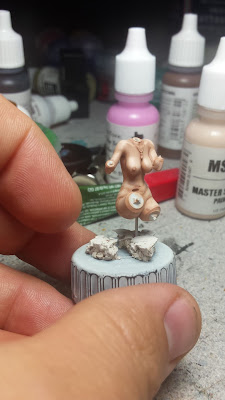 For this model I decided to paint her in sections. I very rarely do this, but luckily the way she assembles it made for very minimal gaps or seams in areas where there shouldn't be any. Her forearms and legs both attached at edges of gloves and stockings, her neck is covered in a scarf and her hair attached in three sections. The only area where I had really bad gaping was in the hair, but that was easily remedied with a bit of Elmer's glue in the seams and that problem was solved.

To start I painted her torso. I wanted her to be pale skinned, since she's a book nerd and probably spends a lot of her time indoors doing research. I also knew that she would need some color in her skin, so for the base coat I decided to mix up Reaper Fair Shadow with Rosy Shadow in a 2:1 mix. This gave her a bit of a pinker hue to the skin over having full on Fair Shadow for the base coat.

With the base coat down, I added some Reikland Fleshshade to the mix and made a custom wash. This added more red to the flesh and was followed by a recoat of the base color mix to bring the skin tone back down to the original color on the raised areas. From there I started adding Fair Skin and then Fair Highlight to the mix to brighten it up.

This was looking good in its own right, but it needed a bit more color to make the skin more natural feeling and less porcelain doll. So, I took a bit of Fair Skin and mixed in a drop of Rosy Skin and a red from Reaper that I have a sample of (and no name for).

With this mix, I painted her upper chest, the recesses of her arms and anywhere that I could think of that would be more on the pink side. From there I started mixing in more fair skin to bring it back in line with the previous parts and tied them all together. I made sure to memorize the colors and the order in which they went on, because I would later need to do the same or similar steps on the head and fingers. 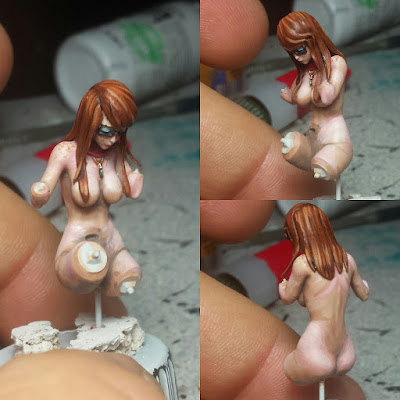 Once the torso and head were done, I started on the hair, which came in 3 sections and needed to be base
coated in sections and off the model before being put into place. I wasn't sure what color hair to give her, and was going back and forth between platinum blonde and red. Finally, my love of redheads prevailed and I decided that she would need to be a redhead.

But, before I put her hair on, I knew that as a redhead she would need freckles! So I mixed up some Tanned Shadow and Fair Shadow and started peppering her shoulders, upper arms, chest and cheeks. Then, to give them some more depth, I mixed in a little more Tanned Shadow and did a few more darker areas over top of the previous layer.

With the freckles done, it was back to the hair, which had some horrible gaps. But that was easily fixed with some Elmer's glue in the seams. I then started highlighting it up. I am really happy with her hair, but for the life of me I can't remember the mix or steps to it... 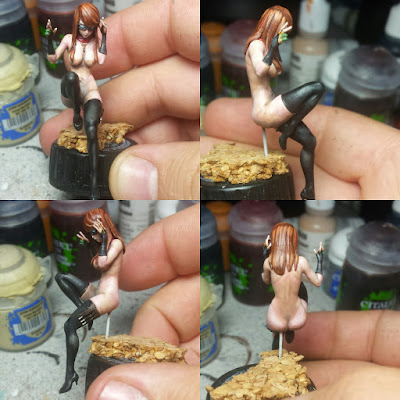 After her hair was done, it was time to give her some hands!

Her fingers were painted the same way as the rest of the body, but I tried making them slightly pinker. But, while I was base coating them I noticed something that was a huuuuuuge let down.

The ring finger and pinky where broken off of the right hand!

It was highly disappointing, but I kept soldiering on. I finished up both hands and her legs, which I had a hell
of a time trying to get her black stockings to look sheer enough. 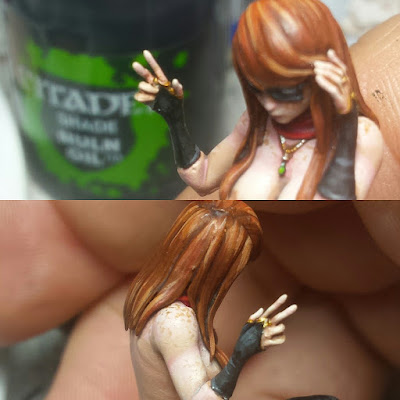 Originally I was going to try to just let it go and live with the fact that the model is broken. But after sleeping on it, I woke up the next morning determined to sculpt a pair of fingers on her hand.

So with green stuff in hand, I went to work attempting to make fingers. It seriously took me hours to make a pair of fingers, since I am not very good with green stuff other than for gap filling.

In the end, I was able to make a pair of fingers that looked like they were folded over into her palm and it looked pretty decent. I also ended up being pleasantly surprised by how well they looked after they were painted. 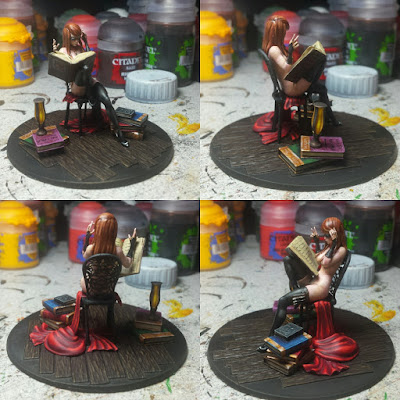 I did end up getting a replacement hand shipped out though. So when that comes in I'll need to decide if I want to try to color match her gloves and hand, or just leave it as is. I keep debating both options.

But, for now she's all done and I was able to get her mounted to her chair. I ended up having to drill and extra hole in the chair for the pin in her butt cheek, but it worked out, because the pin helps hold her into place with out glue.

She's now all done in the paint department. But that's not the end of this project yet.

I am currently working on a display base for her. I also decided to cut away the black sections of the wood planking base too.

You can expect a final post on this project soon. I am hoping to have the base done tomorrow, and a finished project write up posted up on Monday. Until then, you can see the progress of the display base on Twitter and Instagram.