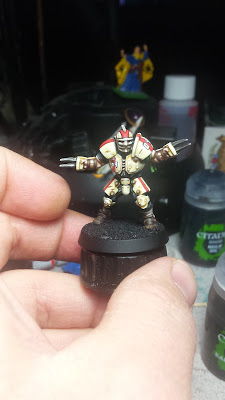 I'm having a blast painting up the human team for Blood Bowl so far and now the test model is all finished! He ended up with a few more stripes, and I decided to freehand the numbers onto his armor.

For the most part, he's all straight colors with little mixing. The only mixed colors are the black for the cloth parts of the uniform and the leather bits. This will make it fairly simple to recreate across the entire team without having to worry about exact color matching of mixed paints.

When I first sat down to finish him last night, I felt like something was missing. After a bit of thinking, I decided he needed a stripe on his chest and one down the middle of his back as well. 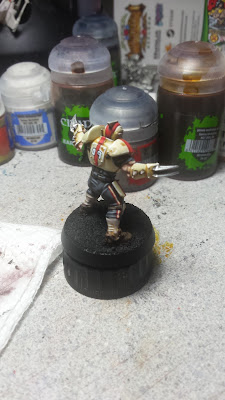 I liked the idea of dark brown leather straps and decided to paint the shoes the same color. Though I may change shoe color for the Star Players, I haven't decided. For the most part, I don't want bright gaudy shoes being the main focus point of the model.

The metallic is just Leadbelcher with a Nuln Oil wash and then a drybrush of Ironbreaker and an edge highlight of Stormhost Silver. Since these are game pieces and not display pieces I don't feel like using these guys for TMM practice.

For the most part I'm really happy with everything on this guy. I'm not 100% sold on the color of the spikes, but I'm also not sure that silver spikes would look good. Since the paint scheme is based on the Deathwing, I figure the spikes and face masks are good as stone colored.

I thought I was finished, and I liked how I left it. But then at my buddy Chris' suggestion, I added a stripe to the outside of each pant leg and it really helped finish off the model. These touches are things I wouldn't ever think of, since I'm not a big sports fan and don't pay attention to uniforms. 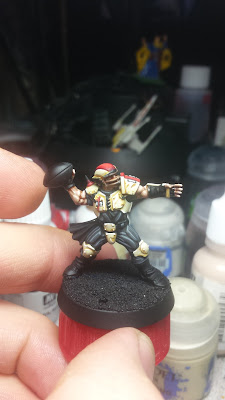 With the test model done, I was going to start batch painting all of the models. Instead I decided to move on to a single figure, this time a Thrower.

Pretty much everything from the Lineman transfers over to the Thrower, but there are some differences. Namely the Thrower has less armor, a smaller right shoulder pad and no leg covers.

Rather than add extra stripes, I decided to just do his helmet, left shoulder and back stripes and then the spike holder on his right shoulder. That way the upper half of the models is uniform. I may add a diagonal stripe to the team's left knee, I'm kicking that around a bit still.

So far I'm happy with how the Thrower is turning out, but I need to go over the shadows on the thigh pads with black again and get them a little more defined. 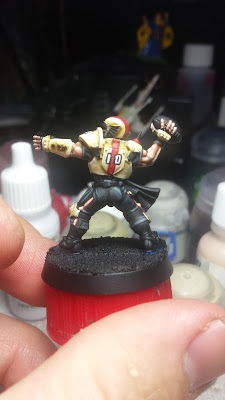 I'm also thinking red gloves for him, instead of brown. But that might
be too much and I haven't decided what color the towel on his belt will be. Maybe white, maybe green.

After he's done though, I am definiely starting with batch painting them all. Mostly because I don't like sitting there waiting for each layer of bone paint to dry. Also, that will keep my black cloth a bit more uniform between all the players.
Posted by Scott Ferguson at 2:38 PM
Email ThisBlogThis!Share to TwitterShare to FacebookShare to Pinterest
Newer Post Older Post Home