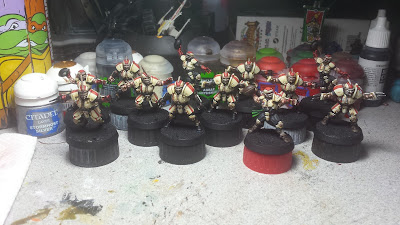 Painting continues on the Human team. I have finished all of the skin tones and the armor plating, including the red striping for the rest of the models.

I decided to mix up the skin colors a bit, having some white players and some black players. I wanted to make it a bit random, so I decided to roll some dice to determine how many black players were in the team.

To do this, I grabbed a die 4 and a die 6 and rolled them. This would give me a guarenteed 2 players, if I happened to roll snake eyes. I ended up rolling a 2 and a 3, meaning that 5 players would end up with dark skin.

To decide which of the models would be dark skinned, I decided to roll a die 10 five times. I lined up all the models in a row and rolled the die, then I counted out the position in line and set that model off to the side.

Interestingly enough, I ended up with a Catcher, a Blitzer and one of each style of Lineman. So, I guess I could have just picked them like that. But it was a fun little game.

Painting the armor went by relatively quickly, since I was painting them all in one go and trying to keep it lower than display quality. This let me keep moving and not have to wait for each layer to dry fully. It also helps that it is pretty simple and is only made up of 3 colors and a wash.

I was surprised with how quick I ended up getting at painting the red stripes. Also, after the first few in the batch I didn't need to look at my original two models for reference any more either. Though as always when batch painting, I did end up missing one or two sections and then having to back pedal a little bit. Not that big of a deal tho.

As of last night, all the armor is painted and I've started on the socks, spikes and face masks with a coat of Rakarth Flesh and, depending on the location, a wash of either Agrax Earthshade or Seraphim Sepia.

If I don't get them finished tonight, the Humans should be all done tomorrow for sure.

Here's a closer look at some of them.


I can't wait to get these guys on the field! I have decided to redo the two original ones a little bit, I don't care for the way their numbers came out, I can do better. So I'm going to repaint their body armor where the numbers are and redo it.