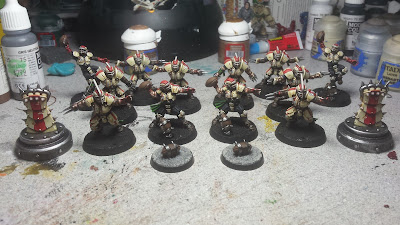 The Tri-City Sentinels, the Human Blood Bowl team, are now all finished and nearly ready for their first game! The only thing left to do is base them, but that will have to wait until the Orcs are finished.

I have to say, that I am extremely happy with how they turned out and the response I've gotten with them has more than exceeded my expectations. Especially the turn markers, those things have gotten a huge amount of love.

As I said before in the WIP posts,  the color scheme is based on the Warhammer 40k Deathwing Terminators. I originally was going to go with a grey, orange and light blue color scheme, but at the 11th hour I changed my mind and I am glad I did.

A lot of things I paint tend to be dark colors and I think that a dark bluish grey would have just ended up being more of the same. Especially since I've seen a lot of black and grey color schemes so far. The bone and red definitely stands out and makes the team a bit more unique.

After the initial two test minis, I decided I didn't like the way I painted the numbers, so I painted over them and redid it while doing the rest of the team. 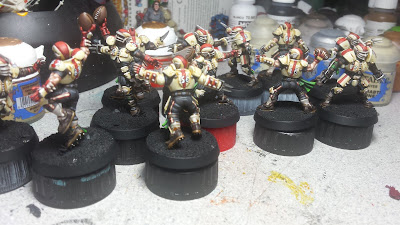 I wasn't sure how numbering works for football teams, since I'm actually not a big sports guy. So I decided to pull the numbers from a couple of my favorite football movies, The Replacements and Varsity Blues.

I'm fairly happy with how the numbers turned out. But I know I could have done better, my brush wasn't cooperating with me, I was having paint flow and brush tip point issues during it. Oh well, I'm just glad to have them done now.

When it came time to paint the coins, I wasn't sure how detailed I wanted to get with them. I had 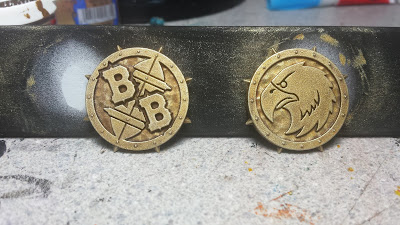 thought about adding in some color, but decided I wanted to keep them all metallic. Finally, since it was the last thing I needed to paint, I went with an all gold coin.

I had thought about painting it like a Canadian two dollar coin, which is silver on the outside and gold in the center. But I just wanted to finish them off and decided to stick with an all gold coin.

So I painted them with Retributor Armor, a wash of Agrax Earthshade, then a drybrush of Liberator Gold and Stormhost Silver. I've since decided that all the coins will be painted this way, regardless of faction. They will all be going in a token box anyway, so I don't see the point in making them all different.

Lets take a closer look and the team!

That's the whole team! I am more than pleased with how they all turned out, but I wish my brush would have played nice while doing the numbers. I know I can do better.
Posted by Scott Ferguson at 10:43 AM
Email ThisBlogThis!Share to TwitterShare to FacebookShare to Pinterest
Newer Post Older Post Home