One of my Grail games is another Games Workshop title, Blood Bowl. I've wanted a copy of this game for decades, but never pulled the trigger on one of the old editions. When GW announced that they were bringing it back, with full support to keep it alive, I was super excited.

Well, I've finally gotten my hands on it and have started working on the Human team. 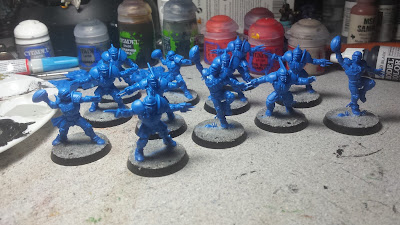 While it sucks a little bit that the miniatures need assembly before game play can happen, at least
they are fairly simple to assemble. Each of the human players are in three pieces and I was able to put them all together without the instructions in the book. It only took about 30 minutes to get them assembled.

At first I wasn't sure if I wanted to glue them to the bases first or do all the basing after the models were all painted. But, since my copy of Silver Tower still hasn't been played because I haven't mounted the minis on their bases, I decided these need to be fully assembled.

The paint scheme was a tough call for me. I wanted to stay away from NFL color schemes for sure. At first I was thinking of grey with orange stripes and light blue accents. Then I was going to do a black and red scheme. Finally I decided to go with a bone colored armor over black cloth and red stripes.


He's almost done and I think it should be a pretty quick job to paint the entire team like this. I haven't decided if I'm going to put grass on the base or just paint the sand green. If I do put grass on, I'll need to trim it down a little, as standard static grass is way too long for football turf.
Posted by Scott Ferguson at 8:58 AM
Email ThisBlogThis!Share to TwitterShare to FacebookShare to Pinterest
Newer Post Older Post Home