Funny story about this model. It is actually owned by my buddy Mike (@dagreenskins on Twitter) and I've given him shit about not opening it or painting it for a solid year. Well, he jokingly suggested that he'd send it to me for painting and I said I would. That said, painting this guy was kind of a return the favor, since he was kind enough to give me one of his spare Frostgrave scenarios from his Adepticon VIG swag bag. 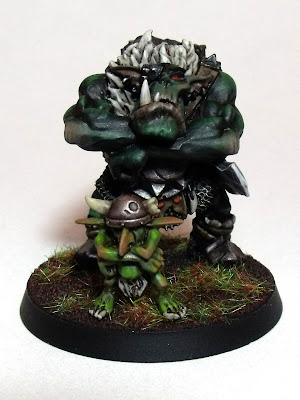 I knew I wanted him to have a darker skin tone, since the goblin that goes with him would be a lighter skin tone. So, I decided to base coat him with Rhinox Hide brown and work up the green from there, like I did with my Black Orc Blockers in Blood Bowl. To give him a bit more interest in the skin tone, I added in some pink to the elbows, lip and ears as well.

The goblin, I painted with a base coat of Warboss Green and then did something similar with the pinks on him as well.

The shield on his back was an interesting challenge, but thanks to a suggestion from my friend Sophie (@hobbyistgirl on Twitter) I ended up doing a checker pattern on one set of "teeth" and solid red on the other. This was then weathered and rusted to give it a more orcy appearance. 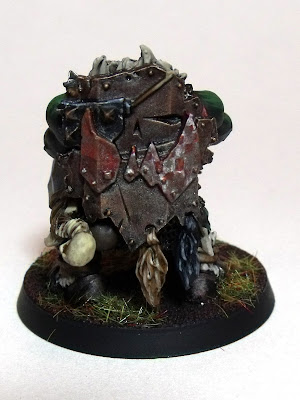 Overall, I'm really pleased with how he came out and I'm glad this mini was finally freed from his vacuum sealed prison.