A few months ago, I was asked by a friend of mine to do a commission of a "cute mini" for her new desk at work. After looking all over and trying to find something suitable, I showed her the mousling Lara Kraft. A take on Lara Croft of Tomb Raider fame. 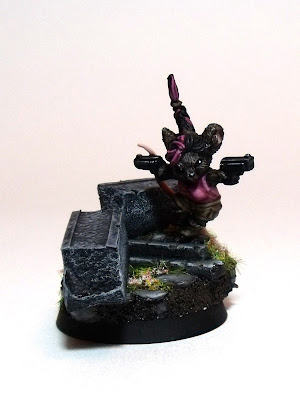 After I got the ok, I ordered it up and started trying to come up with an idea for the base on her. I knew I wanted something to fit with the adventurer theme. Finally I decided to build a base using my rock technique. This would be the basis for an overgrown staircase and I'd try to make it look like she's exploring ruins.

Once the cork and clay were dry, I started making the stairs out of bits of 1/8" square wooden stick and paving stones out of green stuff. I had originally tried using cardstock for the stones, but it ended up looking odd. With the green stuff dry, I added in some sand for dirt and went to town painting it all up.

I was given free reign over most of the color choices, other than she wanted the tank top to be pink and she wanted a pink stripe in Lara's hair. 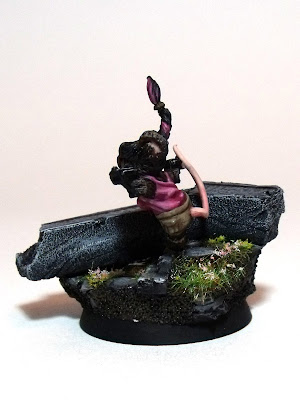 The broken column was made using pink foam and some cardstock for the raised sections. I used my hobby knife to "chip" the edges a bit more and then just drybrushed the whole thing with multiple greys to give it a stone look.

Originally, I was going to try a sandstone look for the pavers and column, but I didn't like how it was turning out. In the ended, I think the grey over the brown dirt works the best. Though, sometimes I feel like grey stone is over done.

I tried to get the base to look overgrown, using static grass and some yellow and pink flowers. If I had some scenic vines I would have added some to the pillar too. But all I had were some etched brass ones that I wasn't comfortable using.

Also super gluing brass vines to the foam pillar would not have worked all that well anyway.

I had thought about painting up the pistols as chrome, but in the end black pistols won out and I think it looks better that way. 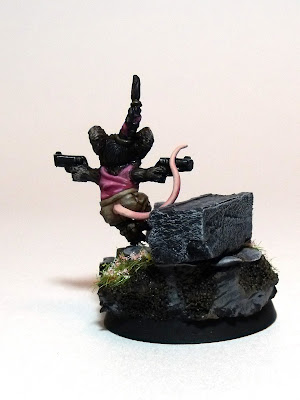 She was a fun model to work on and I'm surprised how quick I was able to knock it out. Of course, a lot of it was drybrushing, like the fur and stones. But still, it seemed like I was done with the base in 2 days and the model was all finished in like 3 or 4 total.

Once she was all finished and packed up, she made her way to Washington state. Where her new owner was anxiously waiting.