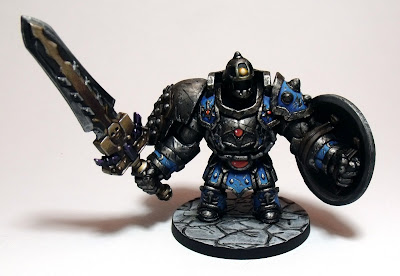 I've finally finished painting the Iron Golem mini-boss for Super Dungeon Explore. I really like the mini, but damn it took a lot out of me painting him. Of course, that's more on me, than on the model itself. Because for him, I decided to try something new with the metallics and it was a slog and a half. 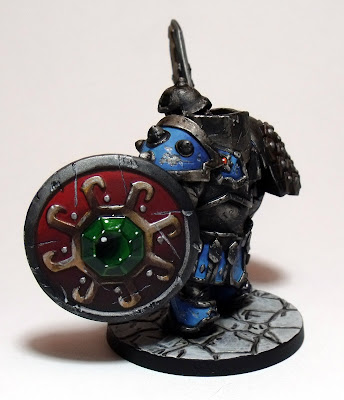 Originally released during the GenCon '16 convention, he was made available for purchase on Soda Pop's web store shortly after. As soon as he became available, I snagged a copy of it and impatiently waited for him to arrive.

When he got here, I was hyped to get started on him. But I didn't want to just drybrush all the metal. Instead, I decided it would be "fun" to prehighlight the metal surfaces with white over a black base coat before I started on the actual metallics.

Instead of doing a dual prime, I went with a blending technique, blending white onto the metal plates. This allowed me to choose where the highlights on each plate went. Once the white was added in, I started with Leadbelcher and started adding in Ironbreaker and Stormhost Silver. 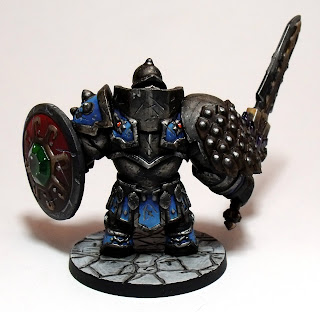 Once the metals of a section were done, I'd start weathering it right away. This turned out to be a blessing and a curse. On the one hand, I got to
see how he'd look when finished as each section was completed, but on the other hand it took a long time and this is where I started to feel the drag.

I managed to get about 75% finished with the metals before I got tired of it and had to set him aside. This was a bad thing, because I didn't pick him back up til a month later and almost forgot the steps I did on him. 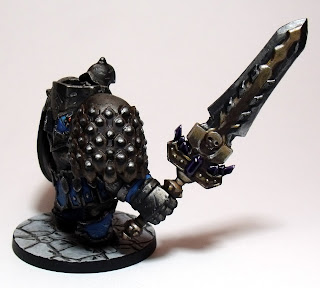 I eventually was able to knock out his entire body and was left with just his sword and shield to do. But again I ended up tired of it and set him aside in favor of more fresh projects (Blood Bowl, Crystal Brush, etc).

Finally I decided it was time to finish him, and began with the shield. I decided on a red panel on the outside of the shield with golden decoration and a green gemstone. The red panel was to try and give him more color variation, since he has a lot of blue and silver already. While the gem was done in green since it is both complimentary to red and when I looked at it, it screamed emerald to me.

The sword was a bit of a challenge, because in general I'm not happy with the way I paint blades. But thanks to the NMM class I took at Adepticon this year, I was able to translate those techniques into TMM on the sword's edge rather well. It definitely feels like the weakest part of the mini to me. But I'm happy with it.

That's pretty much it. The Iron Golem all finished, and it only took 6 months to finally complete. It had nothing to do with the model itself though. I'm a really big fan of this piece and think it looks great!

Mostly it all came down to me making things more difficult and dragging the process out more than it should have. But he's now all ready to go and smash hero's faces in game and has taken his place back on the boss shelf of my display case.

That's it for now. I'm on a big chibi kick now with the Golden Kobold coming up soon. So expect to see lot of those on my Twitter feed and here as the weeks roll on.