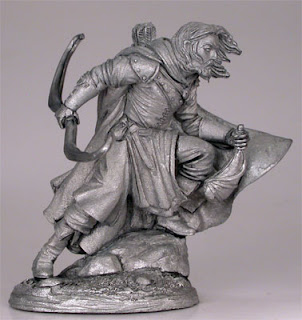 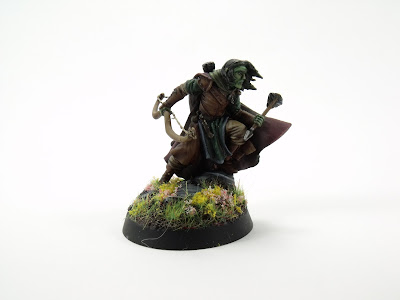 Elves in Glorantha are actually plants and there are various types. Grimwood is a green elf, which means his "skin" is a greenish color and his hair would be a dark green as well. They also can be more or less plant like, some look more human, while others can look like Groot.

Gloranthian elves also have no facial hair, which meant I needed to file and shave off his goatee. I also decided to modify his left hand and have him holding an arrow instead of the sword or wine container he comes with. 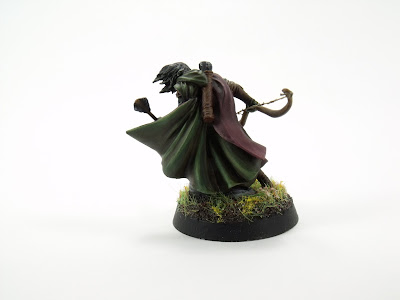 This was an interesting challenge. I'd never sculpted an arrow before.

In the end it took me two tries to get the arrow head the way I liked it, and the fletching was a total pain in the ass. But it looks ok. He's not a show piece, he's a gaming piece and it does the job adequately.

I wanted to keep to greens and browns for his color scheme. But I also didn't want to use the same green or brown across the entire model, because it was look bad.

With that in mind I started with his skin and mixed Warboss Green with Fair Skin and then worked in highlights by adding more fair skin. I also used washes of Riekland Fleshshade, Athonian Camoshade and Beil-Tan Green.

I added some blushing to his cheeks by adding in some pink and then reworking those areas. I didn't want to get too pink though, as he needed to keep an overall green tint to the skin.

The biggest thing on this mini was that I wanted to keep the colors muted. So rather than my usual mixes of using same colors to highlight or shade, I used white to make highlights. For shades I did a lot of playing around with Druchii Violet, which was used to shade the browns and I used Riekland Fleshshade to shade the greens.

I've actually been playing with Druchii Violet over Rhinox Hide for awhile, but never over anthing lighter. So I decided to see how it worked over Mournfang Brown too.

In the end it worked out really nicely and I really like using Mournfang as the basis of my leathers a lot now. I even came up with a new process for painting leather armor because of it.

More on that later.

I mounted him on a 32mm base, because 25mm looks so tiny now a days. Also our grid mat has squares large enough to accommodate them. I super glued him to it and then covered the rest of it with green stuff.

I then glued chunks of slate to the base to continue the rocky look that his original base has going on.

When the super glue was dry, I added some sand to it for dirt. This was done before priming, so I didn't have to worry about the paint coverage later.

The base was painted with Mournfang Brown and highlighted with XV-88, while the rocks were painted with a mix of Neutral Grey and White.

Lately I've been painting rocks without drybrushing, and instead using thin layers and streaking paint across them. It turns out really nice and kind of painterly. Its a completely different look, compared to the technique I shared in my painting rocks tutorial, but I definitely like the results.

That's pretty much it for Grimwood. In the end, I glued a washer to the bottom of his base so I could put him in my single mini figure carrier (which is just a Chessex dice cube with a magnet in the bottom).

I'm happy with how he turned out, but I think I can do a better job on the green skin.