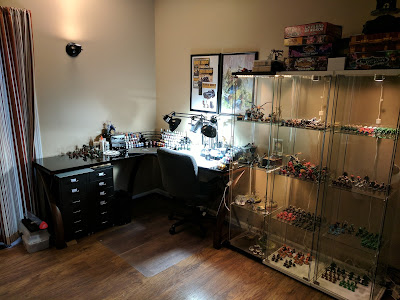 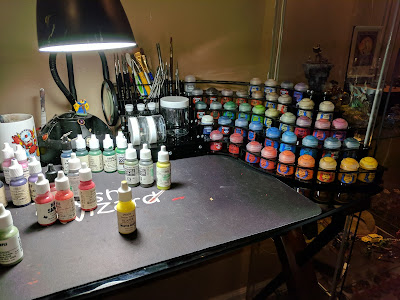 Back in July I ordered a new paint rack system from Back 2 Base-ix, on Sophie's Recommendation. It is a laser cut acrylic rack and sexy as all Hell. Originally, I was perfectly fine with the wait time for it to be custom cut and then shipped from Australia. But as time wore on, I started to get slightly worried that it was either lost or would show up while I was at GenCon. 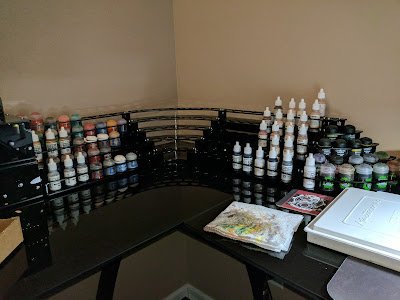 When Sophie had ordered her's, it seemed to take all of 3 weeks from order, to arrival. For mine, it took about a month an a half. Sadly, when it arrived, there were a few cracked pieces, but I was able to fix it and never bothered to email the company.

The rack went together fairly easily, but it was a bit of a puzzle.

Its all bolted together and there are no assembly instructions. But after the first couple sections, you learn easier ways to make it go faster. 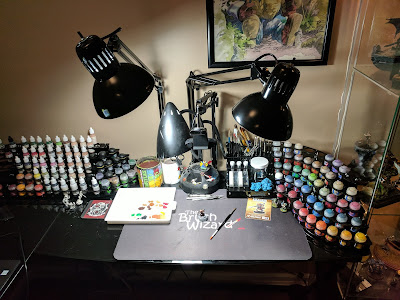 When Sophie got her's I gave her a bunch of crap about how long it took for her to put it together. But
after doing it myself, I realized that it is quite the endeavor.

After the first rack was done though, I had assembly of each following rack down to about 15-20 minutes per rack at the most.

The best part of the new rack system was that I could now retire the old cottage cheese container that I used to hold my brushes and misc tools in.

The next upgrade was actually a webcam.

For awhile now, I've thought it would be fun to do time lapse video of my painting and I've been toying with the idea of doing video versions of my tutorials. But the main reason is because Sophie and I will soon be streaming on Twitch!

More on that later.

The final addition to the desk for now was a new set of lamps. It was amazing how much of a
difference they made in my work area, as I went from one 60w LED daylight bulb to a total of three. They also are mounted on swing arms, so I can point them exactly where I want them to be without any hassle.

I had thought about getting one big fancy lamp, but in reality I don't need a $120 lamp when I can get all the light I need out of these and I can adjust them as needed.

That's it for now, the desk is coming along nicely and I think it is almost finished. The only thing I need to work out is where my laptop needs to end up, as it is currently in the corner of the L and blocking some of the rack. 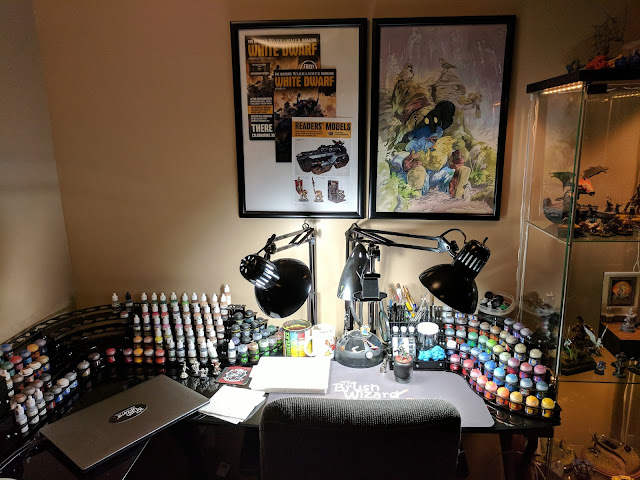