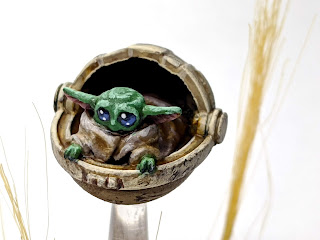 No one was prepared for the cuteness overload that is Baby Yoda, aka the The Child, in the new The Mandalorian. After the first episode, the internet exploded with memes and GIFs, the likes I've never seen before.
Disney+ series,

Disney drastically misjudged the ravenous need of the Star Wars fandom for all things Baby Yoda. While there we toys, shirts and other branded goodies, none of them featured the world's favorite young green Force user. That's when the fandom stepped in and suddenly there were crocheted dolls, posters, shirts and eventually even 3D printed miniatures. Much to the chagrin of Disney execs, I'm sure.

I was lucky enough to get my hands on this one through Shapeways, before the listing was taken down. It is very, very tiny and very, very adorable!

In general, I'm not 100% sold on 3D printed models. I'd rather have a standard molded model kit any day of the week. But, even I am not immune to Baby Yoda Fever and I had an unreasonable need to purchase this little fella. Purchase him, I did.


There's not much to really say about him though, since he's not some fancy conversion and he wasn't a ridiculously intricate paint job. He's super tiny and painted from start to finish in about an hour. I was originally going to put him on a display base with a rod coming from the rear of the carrier. That plan didn't pan out, because I was too excited to finish him up.

Instead I mounted him to an old Games Workshop flying stand rod and a 40mm round base. The base was then painted using Citadel Agrellan Earth technical paint, which is a gritty paint for doing basing, giving it a desert feel.

His carrier was painted in beige colors and then chipped with Rhinox Hide. The casting itself is a bit rough, but it's ok as that helped give some texture to the model. 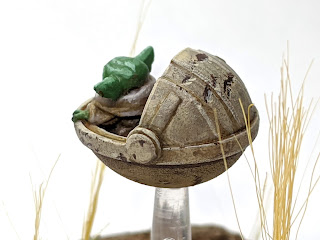 Being as small as it is, I had a really difficult time working out his eyes. Even with a magnifying glass and a bit of wash to act as a guide, it was very hard to see. But I made the best of it and painted his eyes black with a bit of blue highlighting. So now he has big ol' doe eyes.

I'm really pleased with how well he came out and is totally adorable.

That's it for now, there's more projects to share soon. Until then, stay tuned for more projects! You can catch me on Twitter and Instagram, but mostly Twitter. There, I'm always around and showing off projects that I'm currently working on.

If you like what I do and want to support the site and my painting endeavors,  you can do so by tossing me a Ko-fi. All it takes is $3 and it's much appreciated. Also, you can buy The Brush Wizard shirts and such over on my Teespring shop, where you'll find a growing selection of shirts and other goodies including a new series of Stickers featuring this Baby Yoda model and other miniatures I've painted!