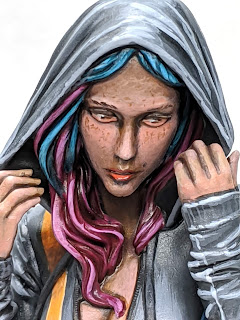 In May of 2019, Ouroboros Miniatures launched a Kickstarter for a line of female busts called Exquis. Originally I didn't pay much attention to it, since I had a bunch of other things on my plate, but eventually I couldn't resist ordering Léa through the Kickstarter campaign.

While the campaign was going I kept looking at this bust and dreaming of how I wanted to paint it up.

What color would the skin be? What about the hair? How do I want to do the hoodie?

After awhile I decided that I wanted to do her with a tan skin tone, with teal and magenta hair. But I wasn't sure what to do with the hoodie. I did know that I wanted to try some freehand on it, but not the design itself.

The model arrived and sat a few months on the shelf, due to other projects and a bit of intimidation.

Why was I intimidated? Well, at that point it had been well over a year since the last female bust I had painted, which was Kommander Sorscha. I had taken her to GenCon for Privateer Press' painting competition, and while she placed bronze I had messed up the shading on her face and she looks like she has a bit of 5 o' clock shadow going on. 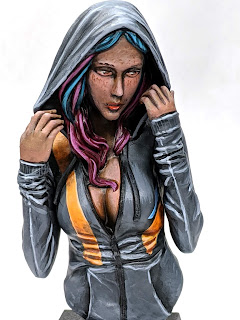 This bust's face would possibly also be very shaded thanks to the hoodie and I was worried about the shadowing issue again. But, you don't get better by not challenging yourself, so I jumped in.

When I got to work on her I started with the skin and hair. I had some issues with the skin tone, which I later attributed to the fact that I had been painting little to no skin in the past months.

I had a tiny bit of trouble with the shading and skin tone. Also her freckles are less than spectacular, because my brush decided to act up in the midst of doing them. But it worked out for the most part. 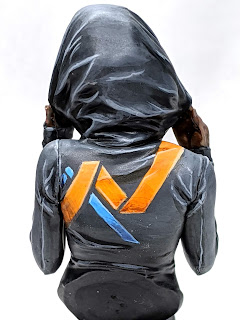 Her hair was easy in comparison, as it is just Sotek Green and Screamer Pink, highlighted by adding white to them. I tried to make it so the two colors intertwined a bit as well, so that there wan't a drastic split between them.

I was still stumped on the hoodie, so she sat for a few more weeks until inspiration hit me.

Part of my problem was that since she had teal and magenta hair, I needed a clothing color that would work well with it and if I was doing a pattern on the clothing it would also need to clash as little as possible. I spent a lot of time comparing different colors to her hair and kept coming back to Mechanicus Standard Grey for the base color.

What happened next was a flurry of activity, which I honestly can't really remember. I gave her a bit of a wash with Basilicanum Grey, I know that for sure, and I didn't do any of the other highlighting until the stripes were down.

The stripes were made possible thanks to a fun little side project. I had originally wanted to put a heart on her back, made from the orange stripe. I used a strip of paper and folded it into shape with the intent to copy the shape onto the hoodie. But, I made the initial run a bit wide and at a bad angle for it to work out. So instead I opted to do a zig zag pattern and wrap it around the side and back to the front, creating an asymmetrical pattern on the hoodie.

It still needed something more.

That's where the light blue stripe came into play, and with it I was happy with the design.

Overall, I'm very pleased with this piece. It's always nice to knock out a bust or larger scale piece. This model is an excellent piece and I would definitely suggest looking into models from Ouroboros Miniatures. I might have to get another of their kits in the future as well.

That's it for now, there's more projects to share soon. Until then, stay tuned for more projects! You can catch me on Twitter and Instagram, but mostly Twitter. There, I'm always around and showing off projects that I'm currently working on.

If you like what I do and want to support the site and my painting endeavors,  you can do so a couple of ways. First, you can toss a couple bucks my way on Ko-fi. All it takes is $3 and it's much appreciated. Also, you can buy The Brush Wizard shirts and such over on my Teespring shop, where you'll find a growing selection of shirts and other goodies including a new series of Stickers featuring this Léa model and other miniatures I've painted!