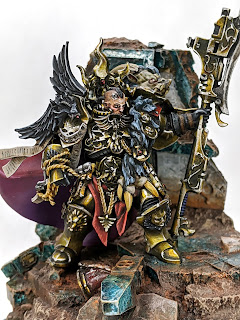 Of all the models for Games Workshop's Horus Heresy game system, the best by far have to be from the Character Series. This series of specialty models depict important characters in the Horus Heresy setting, mostly the leaders of the Adeptus Astartes, sculpted into dynamic poses that capture the action and feel of a galaxy at war in the year 30,000.

It's a well known fact that I don't really know much about the lore of Warhammer. I don't read the books and mostly just skim the lore for the factions that I do play. I'm especially lost when it comes to the Horus Heresy, other than the fact that it's a civil war between the Space Marine Legions of the Imperium.

In general, I just like the game and the models. Even for those, like myself, who aren't super invested in the setting, there's a lot to love in the Character Series and the sculpts are amazing. I've always wanted to paint one of them, and this model of Constantin Valdor, the Captain-General of the Legio Custodes was the one that grabbed me. 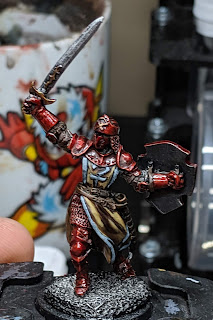 Valdor gets a lot of flak for being a very busy model and, in general, it really is. He's known in some circles for looking like the final boss of a Final Fantasy game and is covered in ornate details. There's a lot going on with this guy. It is almost as if too many design ideas were tossed his way. A lot of little details are easy to miss on him, and when first looking him over he intimidated the crap out of me.

So much so that I waited close to 2 years to paint him.

When I took the plunge and finally started him, I went all out. For rather than paint him in a traditional fashion, I decided to flex Citadel's new Contrast paint range and see what I could do with it on a display quality model. This lead to a bunch of tests of how Contrast works over metallic paint.

The proof of concept worked out nicely and I was sold on the idea of doing Valdor's armor with it.  I would do the gold armor with metallic silvers and cover it with yellow Contrast paint. 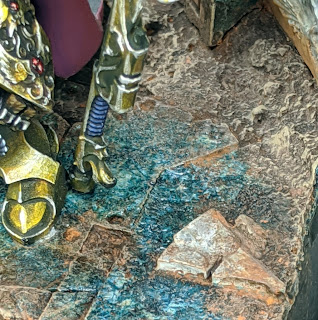 I wouldn't do that until after I'd painted his base though.

Valdor comes with one of the coolest scenic bases I have ever seen. He stands atop a platform, above a broken stair with a crumbling wall behind him. The iconography puts him on the planet Prospero, home of the Thousand Sons traitor legion, probably during the Burning of Prospero.

The base is so awesome and I wanted to do it justice. The goal was to do green and white marble on it to help it contrast against the yellow and reds of Valdor himself. I've never been very good at freehand painting marble effects though and needed to solve that problem. 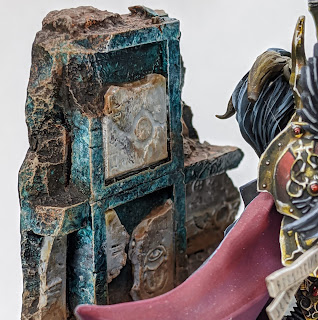 But as they say, "modern problems require modern solutions!" So why not put Contrast to the test again and use it to make a marbling effect? But how?

I took the problem to Twitter, where it was sugggested that I try using cling wrap over a wet layer of Contrast paint to get the veining. That's when I remembered I had seen a similar technique on YouTube to create marbling effects for outer space scenes. I knew I could possibly use this technique to my advantage and create marbling on the base.

Many more tests were done and in the end I came away with a marble effect that I am really proud of. The marbling of the green looks really good and it was almost a shame to cover it up with dirt and grime. But there's no such thing as a pristine war zone, so it needed to be done.

High on enthusiasm, I attempted some white marble in a similar manner. It worked out ok and I was really happy with it originally. But now I feel like it really needs to be tweaked a bit more to get it just right. I actually ended up redoing the white marble sections a few times because I wasn't happy with it, but eventually decided enough was enough and had to move on.

The dirt and rock were painted in a whirlwind of browns and various washes. A flurry of activity, in which I can't really remember what I did exactly.

I do remember "screwing it up" when it came time to do the pigments and worrying that I'd ruined all that marbling. But, I was able to pull through and I am really pleased with the results.

While it is a shame that much of the marble on the ground is covered by dirt and grime, the piece has a much more lived in look to it because of it. It's always scary to take the one extra step and not know if you're going to mess up all of your hard work. But when you do and it all works out, it is totally worth it. 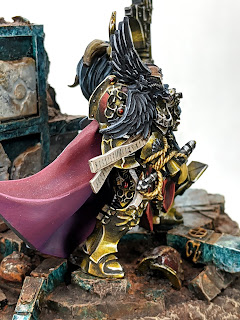 With the base all finished, it was time to get started on the man himself!

Normally, I would go to town on a project with my own color scheme and go wild on it, but for this one I wanted to keep him as close to the official paint scheme as possible since he's an establish character. To get it as close as possible, I spent a lot of time on Forge World's website checking out their studio model.

For Valdor's armor, I painted it using the high contrast true metallic silver technique. Once I was happy with the shadows and highlights of the metallic layer I followed it with a glaze of Nazdreg yellow, similar to how I painted the purple armor in this Adventures in Contrast example. It was highlighted buy using Stormhost Silver and Vallejo Air Aluminum, while the shading was done buy glazing the dark areas with Druchii Violet shade wash. This gave the armor much more depth and makes it seem much more reflective.

Vallejo Air Aluminum is a rock star of a silver too. It is very, very bright and perfect for spot highlights on metallic armor. Since picking a bottle of it up in June of last year, It's made me change up my TMM recipe, going even darker on the shadows to allow it to really pop. That, along with the Druchii Violet shading gives the armor an excellent look that I'm really happy with. 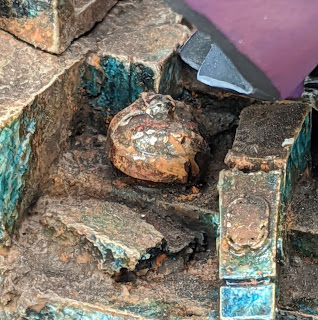 Overall, Valdor is a tough model to paint but well worth the challenge if you are up to it. The official pictures of him don't do him justice, as he sees very flat in them and some of the intricacies get lost thanks to the base's color scheme. He is a stellar model when viewed in person.

There's details everywhere. Such as the helmet and shoulder pad of a fallen marine (Thousand Sons marine in my case). His armor has a plethora of details on it and painting the highlights on it was a fun challenge, which I believe made me level up my TMM game a bit more.

The marble work of the base helped me discover new ways to paint, which is always a good thing. As I say, always try new things and push yourself to improve with each new project. Learning new techniques is fun and anything you can add to your hobby skill set is always a bonus!

That's going to be it for this one. I'm jonesing for more Character Series models and have been eyeing up both Horus and Vulkan for possible future projects. But that'll have to wait until I work through some other display pieces first.

Until then, stay tuned for more projects! You can catch me on Twitter and Instagram, but mostly Twitter. There, I'm always around and showing off projects that I'm currently working on.

If you like what I do and want to support the site and my painting endeavors, you can do so over on Ko-fi. All it takes is $3 and it's much appreciated. Also, you can buy The Brush Wizard shirts and such over on my Teespring shop, where you'll find a growing selection of shirts and other goodies including a new series of Stickers featuring this Valdor model and other miniatures I've painted!