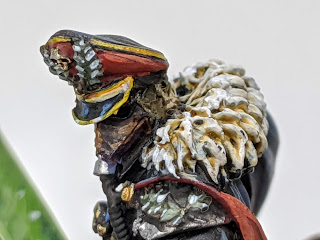 Alright folks, it's time to kick off the '20s with a new, better Miniature Monday!

This year I want to try to talk more in-depth about the model that is being featured, include additional detail shots and also pictures before paint for heavily converted models. The goal is to make each Miniature Monday as detailed as possible and worthy of its place as a main feature of the site.

What better way to kick off the new year and new format than with my favorite model of 2019, the Death Riders Commissar! This model has been heavily converted there's a lot to cover on this guy.

2019 was a big year for customizing models, thanks to the Death Riders project. A massive 15 motorcycle addition to my Steel Legion army, which I'll be cover in their own Miniature Monday in a few weeks. Each of those bikers were customized by plopping a torso of a Death Korps of Krieg infantryman onto the legs of a Genestealer Cults Jackal biker and doing a bit of green stuff work to rebuild the long coats on them. Those models are pretty tame in comparison to this bad boy, which is made from four separate models and a few bits pulled from my collection. 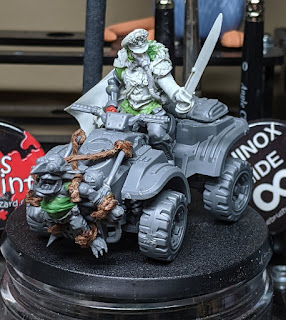 To create this model I used the ATV from the GSC Jackals kit, as well as the legs from the rider. I then used a Lord Commissar model for his torso, left arm and sword, as well as his hat.

That hat was an interesting challenge indeed.

For the most part I try to keep the gas mask aesthetic across all models in the Steel Legion and I wanted the commissar to be no different. The problem being that all of the DKoK models have helmets on them.

After some creative cutting, I was able to remove the helmet from the DKoK head and the hat from the commissar. With some patience and hobby knife work they were fitted to each other fairly easily, but would require a bit of green stuff work to get it right.

I was surprised to find that the head ended up fitting very nicely into the neck area of the commissar torso. It worked out even better after sculpting some fur around the back of the head. Now it looks like it was meant to be there from the very beginning.

While the left arm worked perfectly for the pose I was going for, The original right arm on the commissar model was pointing his gun to the right and was unusable for the pose of the rider.  I needed another solution.

Instead, I did a bit of rummaging through my bits drawer and came up with an arm from a Sicarian Ruststalker. I then needed to find a solution for his right hand, which was taken from a Skitarii Ranger's arm and attached in such a way as to make it seem like he's resting it on his leg. This works great for a prosthetic arm and it also ties my Imperial Guard to my previous Adeptus Mechanicus army too. 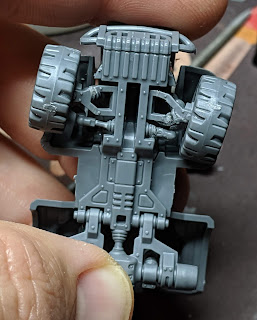 With the rider not holding onto the handlebar, you may ask "Doesn't the Jackal leader steer one-handed? How you do this?"

I'm really pleased with the handlbar on this model. Since the Jackal leader does hold the handlebar with his left hand I needed a solution to this little problem. Also, I wanted to play with the steering of the front tires too, to make it a bit more dynamic. 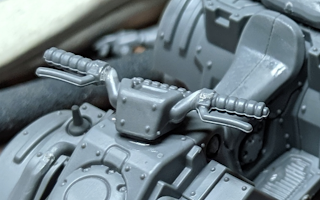 The change it tire angle is a rather simple, though not elegant, modification.

To get the tires pointing a bit sideways I cut a little bit of the A arms away and then bent them into position. They were then glued into place with a boat load of model glue. It's not the greatest or cleanest conversion, but it works and since it's underneath the ATV it's not visible at all.

The handlebars themselves on the other hand, those are so nice and I'd be lying if I said I wasn't proud of them.

The solution came in the form of more random bits in my collection! (bits collection finds are always excellent) This time it was all thanks to some left over pieces from the Sydonian Dragoons I had built previously.

Luckily, that kit contains a few different versions of their handlebars. I was then able to cut the grips off of the original ATV handlebar mount and then replace them with grips from the Dragoon kit. All that was left to do was turn the handlebar so it matched up with the tire facing and viola!

It's a really subtle conversion that is easy to miss, and I think that's what makes it so great.

I supposed now it's time to finally talk about the section of this model that is everyone's favorite... 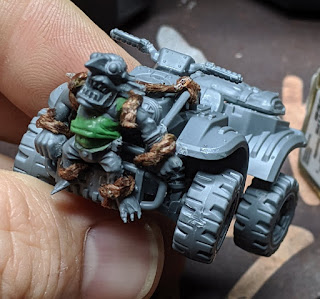 First, a tiny bit of background for you all.

This conversion came around for two reasons, the first being that my friend Greg and I have an ongoing grudge match when we meet up at Adepticon. He's a tried and true Ork player and plays a list of Ork walker mechs.

The first year we played, he obliterated me the first game and then we basically tied in our second. The following year, it came down to both of our last models on the table in a Dreadnoughts vs Orknoughts game. He won, but called it a tie.

Now, from a Lore stand point, Steel Legion is known for defending the planet Armageddon from Orks. That's, like, their whole thing. Well, they also love their Chimera APCs too. There's even a Commissar from Armageddon, who is basically the greatest war hero of the Imperium.  For real.

So to tie into the fact that the Steel Legion love fighting Orks and to make a jab a Greg, I decided to add some anti-Ork propaganda to the Death Riders in the form of skulls and the like. The cherry on the top of it all is this guy, a grot that has been tied to the front the the Commissar's quad... Fury Road style.

Because I have the best friends and since Hobbyistgirl loves a joke, she donated a box of Gretchin to the cause and when they arrived I went to town.

Like Victor Frankenstein choosing the just the right body parts for his creature, this little guy was made from a few different gretchin cobbled together. I knew that the ropes would hide most of the joins too, so I could play with positioning a bit more than normal.

For ease of build he was glued to the front of the quad in pieces. I did gap fill and sculpting work afterward, making my job loads easier than if I had attempted it without him attached to the ATV.

I think my favorite part of that guy is his stupid grin. Or perhaps his little tummy sticking out from under his shirt.

And with that, the model was complete and it was time for paint.


A Commissar rides into battle atop his mighty steed, a nightmarish black beast and an icon of his station. It is emblazoned with red stripes a sign of his rank and position of power, as all should know and tremble when they see a Commissar come 'round.

As black and red seem to be synonymous with Imperial Guard Commissars, I decided to paint his ATV black and a set of red stripes. This serves two purposes.

First, it makes him easily recognizable on the battlefield and helps break up the standard color scheme of the Death Riders a bit, which is a sea of Stormvermin Fur and Zandri Dust.

Second, it differentiates him from the Death Riders Commander, as he is also riding an ATV. My hope being that they will be easily recognizable to my opponents, so they don't get confused as to which is which. 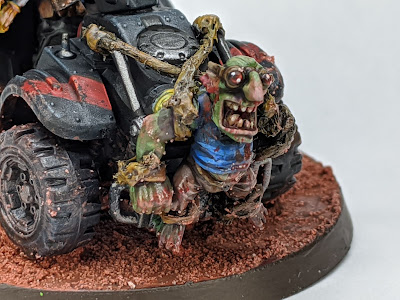 Like all vehicles in this army, it is painted very simply. This one was primed black and then drybrushed with Dark Reaper and a light grey. I then painted some red stripes on it to give it a little bit of character, before weathering it with a sponge to add some wear and tear.

The gobbo prisoner is painted with brighter colors. Since he'd be bloodied from his capture and subsequent mounting to the quad, I would need something that contrasted well with his injuries.

With that in mind I went with a blue shirt and a light green and pink skin tone, which was battered and bruised by using splotches of Druchii Violet. The blood stains are Rhinox Hide and Khorne Red. Since his feet are bare, I made it a point to bloody them up quite a bit. I'm sure he sees a lot of debris hitting him as he travels, the poor bastard.

I chose to paint the Commissar's bionic arm copper as a call back to the Adeptus Mechanicus army, whose colors are green and copper. It also helps the arm stand out from the breastplate and white sash on his chest. As for the rest of his colors, tried to keep him as close to the official Lord Commissar paint scheme as I could.

Well then, I do believe that is all I can really talk about for this fella. He's definitely a centerpiece model and I love getting him onto the table as often as possible.


Until next time, you can catch me on Twitter and Instagram, but mostly Twitter. There, I'm always around and showing off projects that I'm currently working on.

If you like what I do and want to support the site and my painting endeavors, you can do so over on Ko-fi. All it takes is $3 and it's much appreciated. Also, you can buy The Brush Wizard shirts and such over on my Teespring shop, where you'll find a growing selection of shirts and other goodies.

Thanks for reading and stay tuned! But for now, enjoy some more finished model pictures!