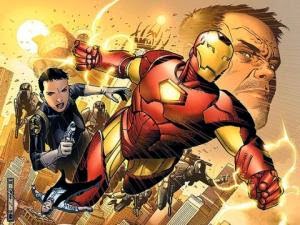 After showing the Incredible Hulk to a few friends of mine, it was suggested that I try doing minis of all the main Avengers. Originally, I thought it would be nearly impossible to do so, since Iron Man is pretty particular in his look. But one day when I was flipping through Reaper's store I found the mini that would make the task of making Iron Man a reality.

His name is Afterburn, and he's a Superhero model from Reaper's Chronoscope line of "modern" models. Apparently they have a whole mess of Superhero minis, which I didn't know about too. That's pretty good to know, especially if I ever can get a game of Shadowrun or maybe a Superhero themed RPG going.

As you can see, he's perfect! The only thing that needed to be changed was the fin on the top of his head. Judging from the picture on their catalog, I wasn't sure how easy that would be. But I figured it was worth the trouble and as it turns out, it was super easy to remove! Maybe 5 minutes or cutting and filing later, the fin was gone and I had all the conversions done. 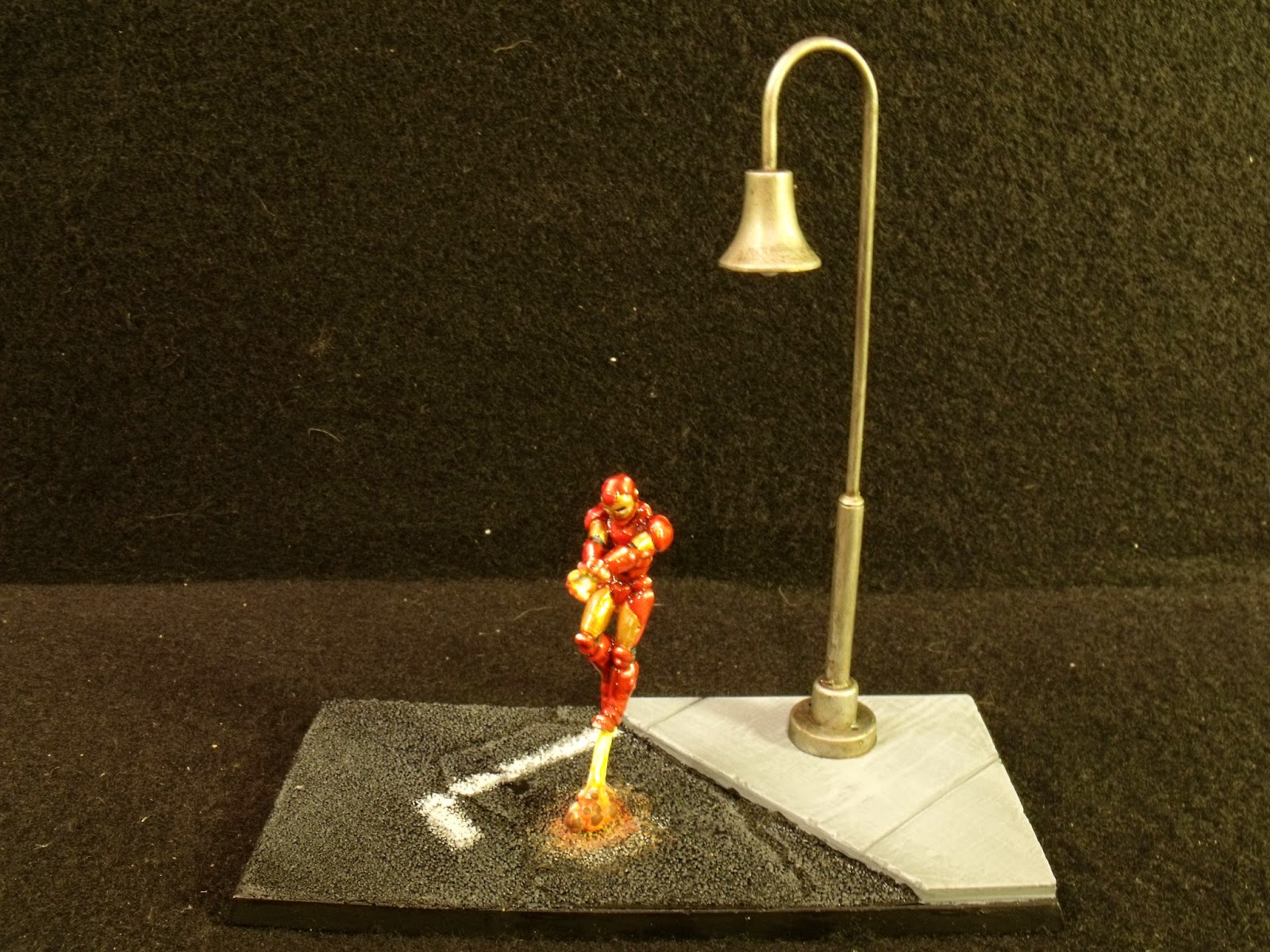 Painting went by really fast too. I'm not sure if it's cause I rushed it, or if I was just used to working on C'thulhu and all the time it took to work on that one. But between making the base and the actually painting of everything, it only took 2 nights. 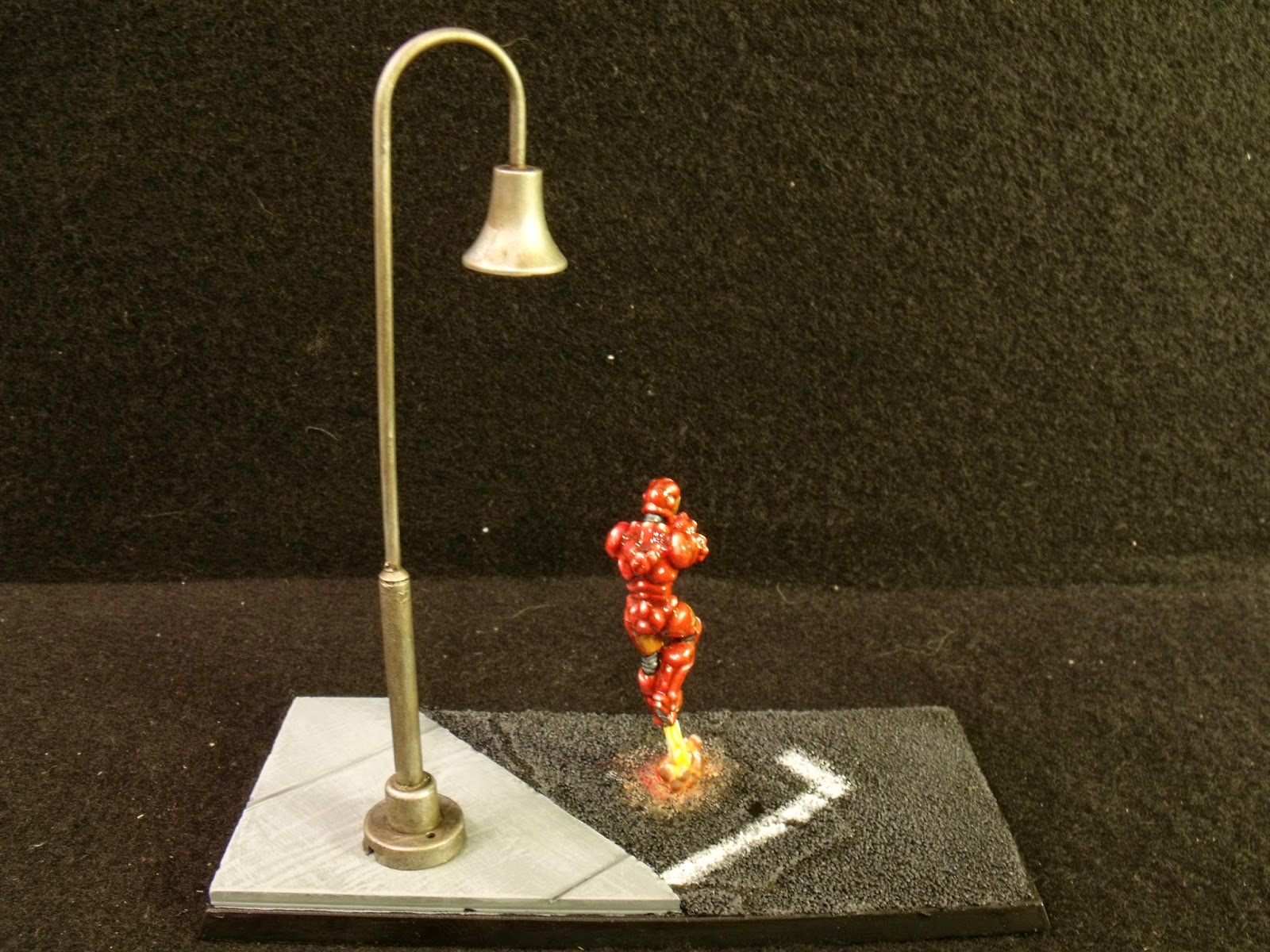 The base is made using an old Warhammer chariot base I had laying around. I knew I wanted Iron Man to be fighting along side Hulk, so he'd also be at street level. This time I was certain that I wanted to have
sidewalk on the base and found a new method. Instead of using clay, I cut a piece of old plexiglass to size, then using my razor saw I made the grooves. It was super simple! Also to help tie them together, I used another one of the HO scale gooseneck street lamps I had left from the Hulk model and attached it onto the side walk.

The painting of Iron Man was pretty straight forward. I just needed to figure out what armor plates to make gold and which to paint red. I think I made the right decisions based on the way he's sculpted. The only thing I'm not sure on is how the gloss coat turned out. I may go over all of the seams with some dark red and knock down the gloss in them. It looks good in person, but on camera it's kinda iffy. Still I think if I go over the seams, it might give the armor a bit more definition. We'll see.

This was a quick project. I'm actually still pretty surprised with how fast it went. This Afterburn model is a pretty sweet mini to begin with and I wouldn't mind getting another one to paint up as his own character. It is pretty obvious that he's a copycat of Iron Man though, but boy am I glad that he his. If he wasn't I wouldn't be any closer to being able to yell out "AVENGERS ASSEMBLE!"

When I picked up this mini, I also picked up another one to use as the basis of Captain America. This one it gonna take a lot more conversion work in order to get it right. But I think I can pull it off. Just need to do some cutting, trimming and custom modeling in order to make it work.