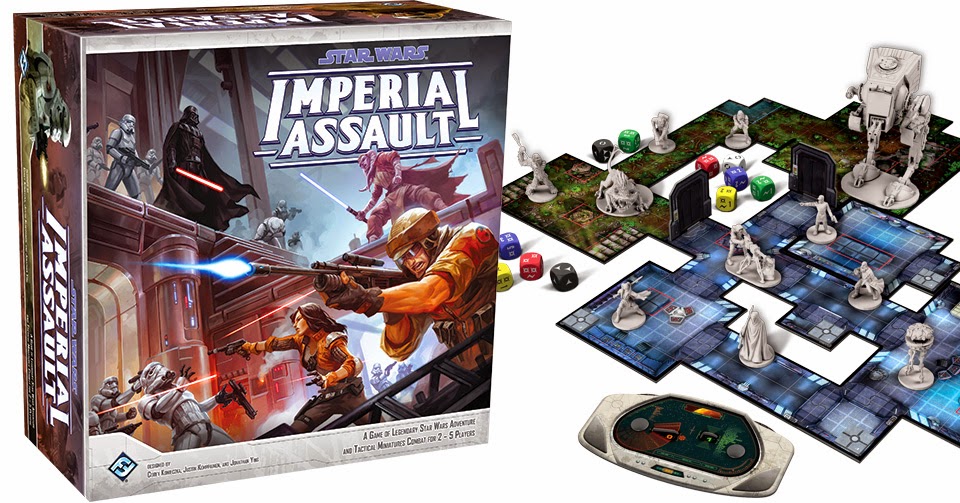 If you've been reading, or following me on Twitter, you know I've been working on Star Wars: Imperial Assault as a commission and making a solid amount of progress on it. Now, I am proud to announce the project is 100% complete!

This was my first ever commission job and ended up being a lot less stressful than I was expecting. It helps that this was Star Wars and I'm a big fan, so painting up all this stuff was really fun for me. Plus the game's owner was a joy to deal with and seemed to be hyped every single time I sent him progress pictures.

I've debated for the better part of a year on whether or not I should do commission work. I'd thought about hanging posters in local game shops or buying up some Warhammer, Warhammer 40k, Hordes or
other miniatures and tossing them up on eBay for some extra side cash. But I never went ahead with it, because I wasn't sure how to price anything or about dealing with people and turning my hobby into a job.

Then I got a text message from a friend of mine, asking about painting up Star Wars: Imperial Assault for a guy he met. We probably went back and forth for about half an hour before I decided to go ahead with it and told him to give the guy my email address.

We sent emails back and forth for a bit, talking about what I've painted and arranged a meet up, where we could talk in person about the game and what he was looking for.

Finally, we met up at a local game store that we both frequent and got to talking about things. I explained what I was thinking and he explained what he was looking for in a finished product. We talked prices and

time frame and such and he handed over the minis, info cards and rulebooks so I had things to use as examples. I then picked up a few supplies and headed home with minis in tow.

I started with the Stormtroopers and moved on from there, sticking to all of the multiple miniature groups first, since I tend to dislike painting squads. It all went fairly fast, and most of the reason it took me a month to finish the project was due to other things cropping up

and taking up free time (house and work responsibilities, mostly).

I really enjoyed painting the Emperor's Royal Guard, they were rather easy, considering how they are designed. But I also like working with red. It seems to blend easily and it helps that it's my favorite color. It wasn't until later that I realized that their heads were actually glossy helmets, similar to Darth Vader's. But they turned out well and I'm really happy with them. 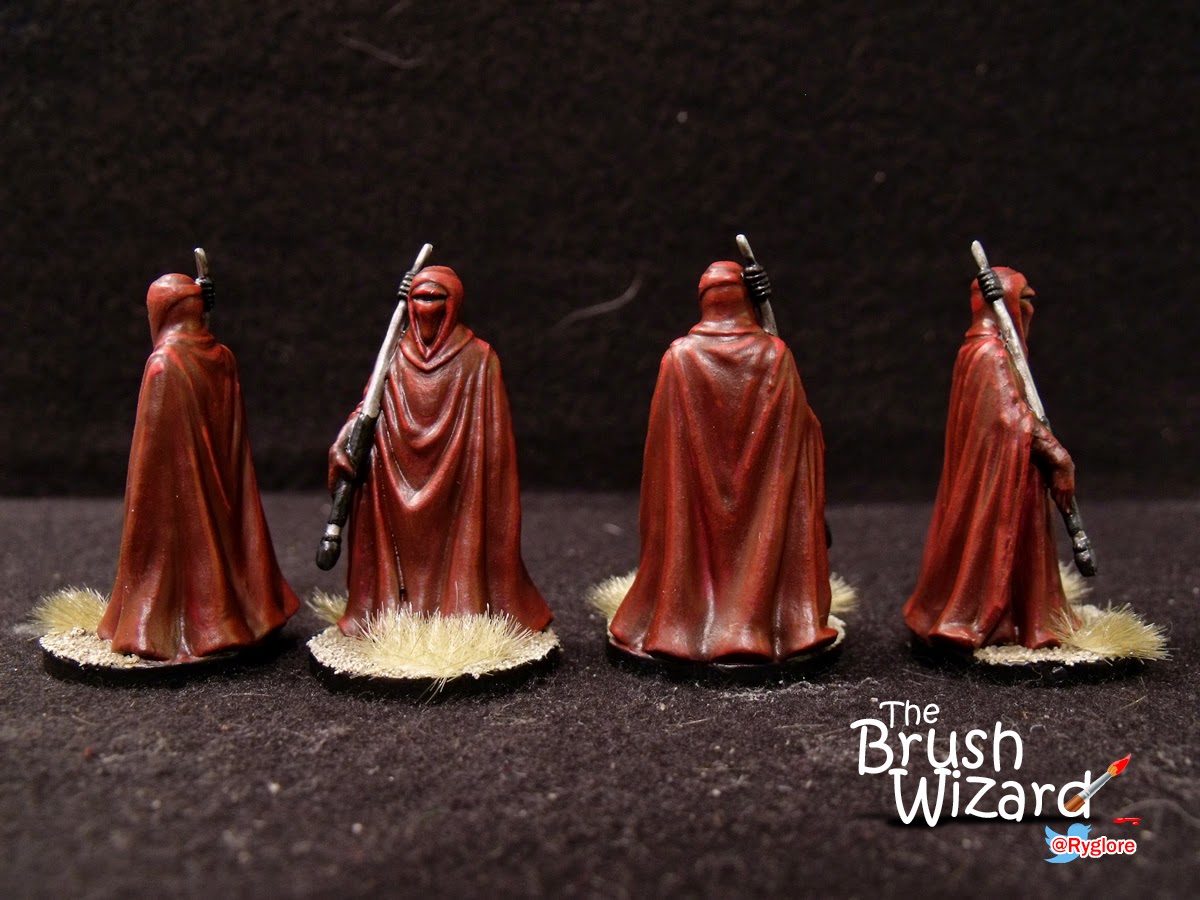 The squad painting went pretty smooth, and I only had issues with the Imperial Officers, who I started with too dark of a grey for a base coat and messed up my highlighting. Which meant I needed to repaint their uniforms from scratch, that set me back a about a couple days.

I think my favorite of the rank and file models has to be the
Trandoshan Hunters. It was fun painting them up, even though I had to highlight all their scales. But I'm really pleased with the end product and am very happy with their shotguns. 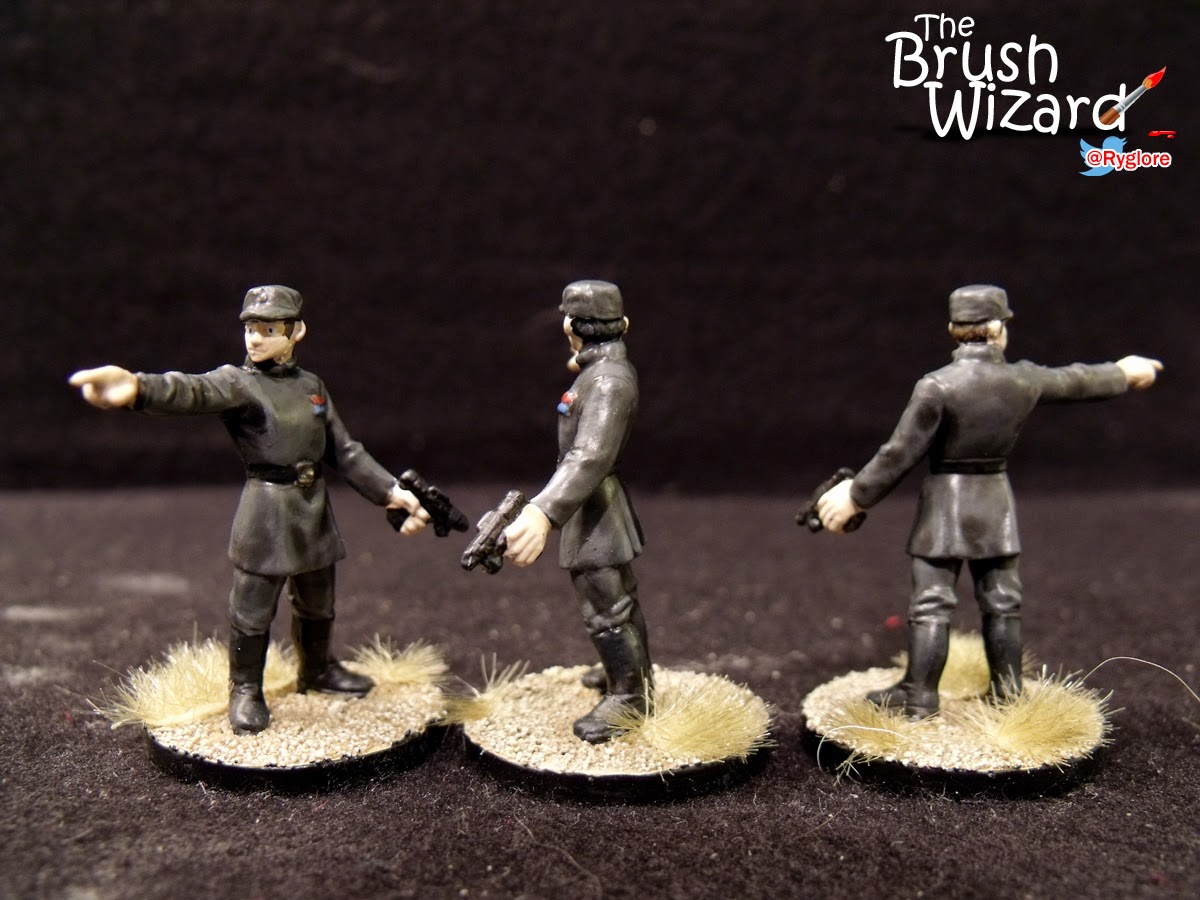 Once the rank and file were finished, it was time to move on to the character models.

I started with Luke Skywalker, since I had already done his skin tone while I was working on the Imperial Officers. Vader proved to be an
interesting challenge, thanks to his glossy armor sections and the Twi'lek Jedi, Diala Passel, proved to be another. 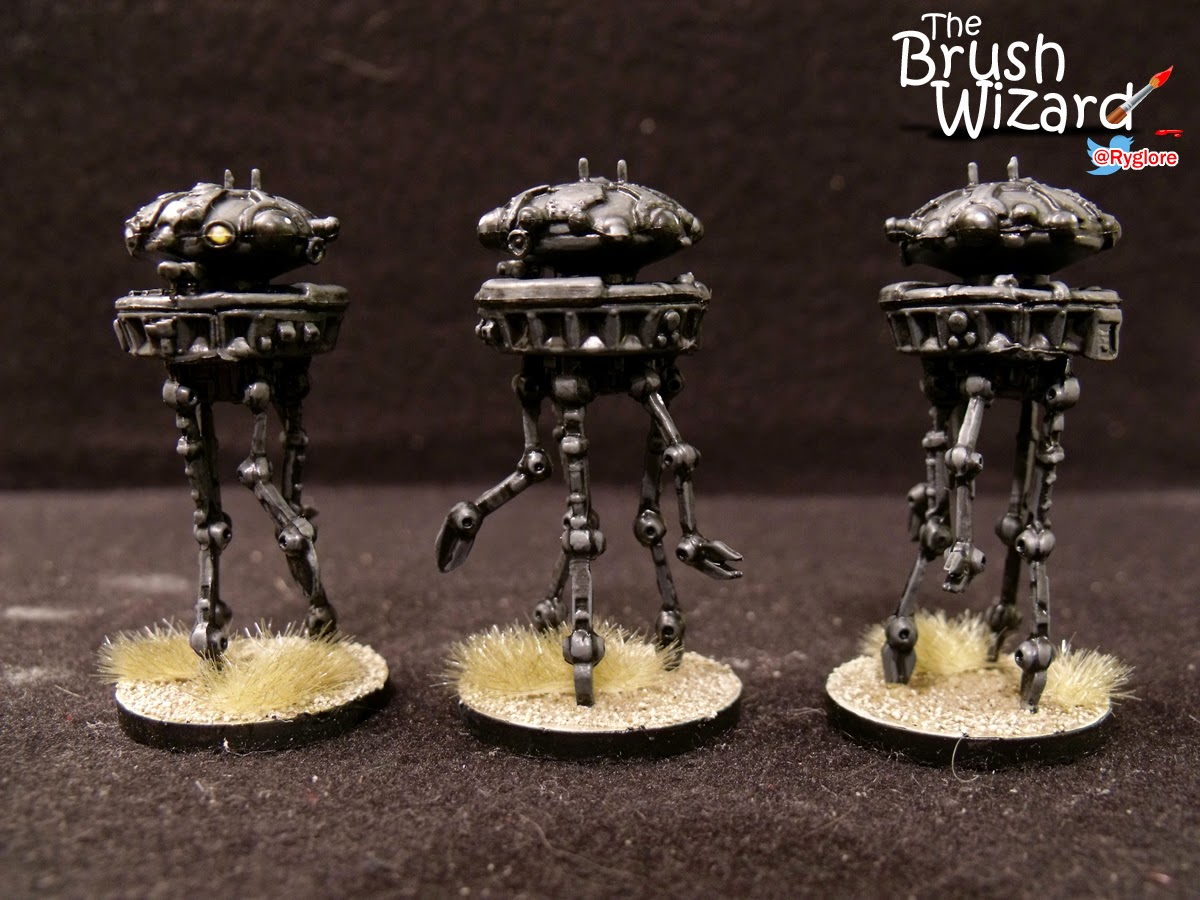 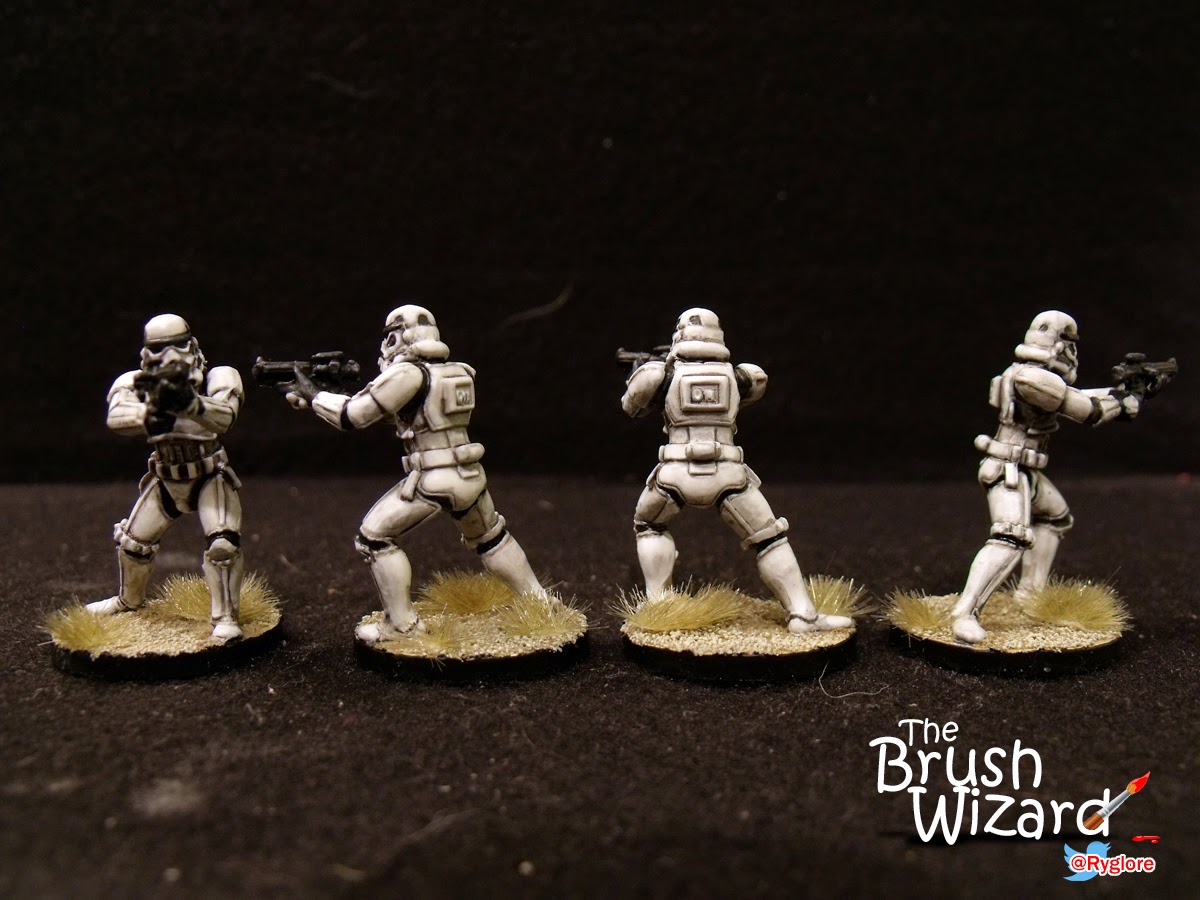 All the heroes turned out really well and all were a fun exercise in color matching. Of course, their colors don't 100% match the artwork, but they are close enough that they still convey the spirit of the artwork on the hero cards. 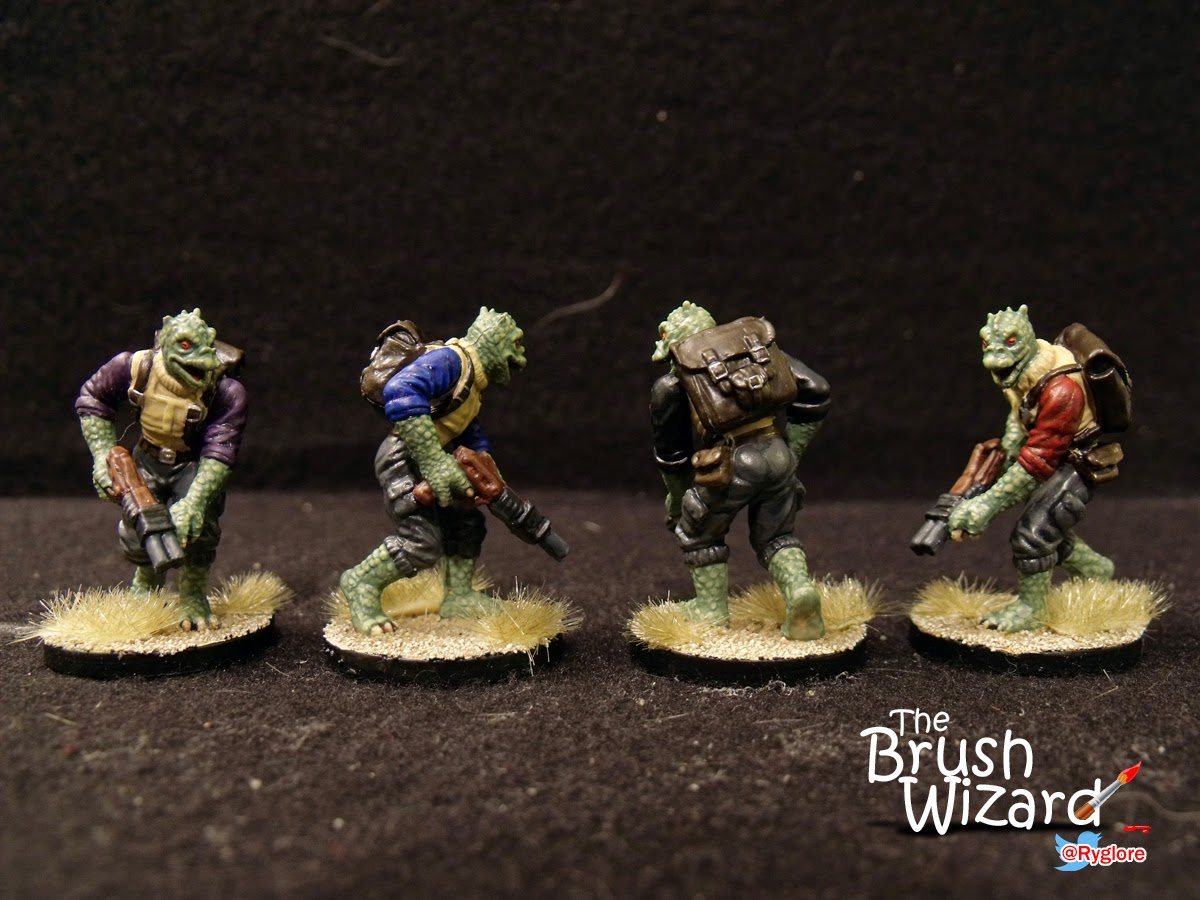 Out of the heroes, I'd say that the Bothan, Mak Eshka'rey has to be my favorite. A close 2nd would be Fenn Signis, the Rebel Soldier, as he's a cool mini and I was able to give him an teeny tiny Rebel Insignia arm patch. Followed by Gideon Argus, the Commander, who is filled with attitude. While the Smuggler, Jyn Odan, is my least favorite thanks to her miniature's pose.

I tried out a few new things during this project as well, including 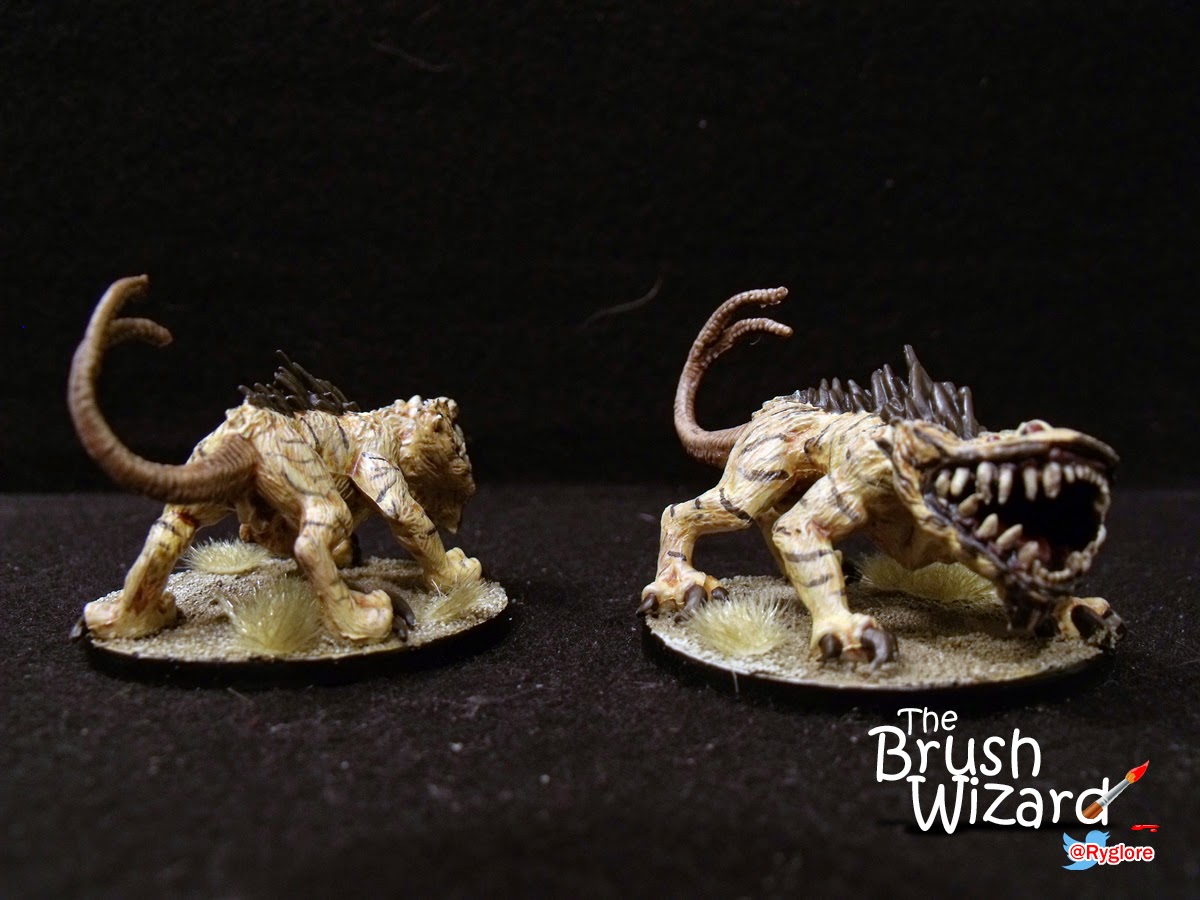 Games Workshop's new Texture Paint line and the use of static grass Tufts instead of loose grass.

Normally I use glue and my own mix of silica sand, plastic pieces and wood shavings for my basing material. But for this, I was looking for a faster way to do the bases. I had heard about the GW texture paints on Twitter and thought I'd give them a go.

It was unfortunately not up to par. The sand clumped up on the brush 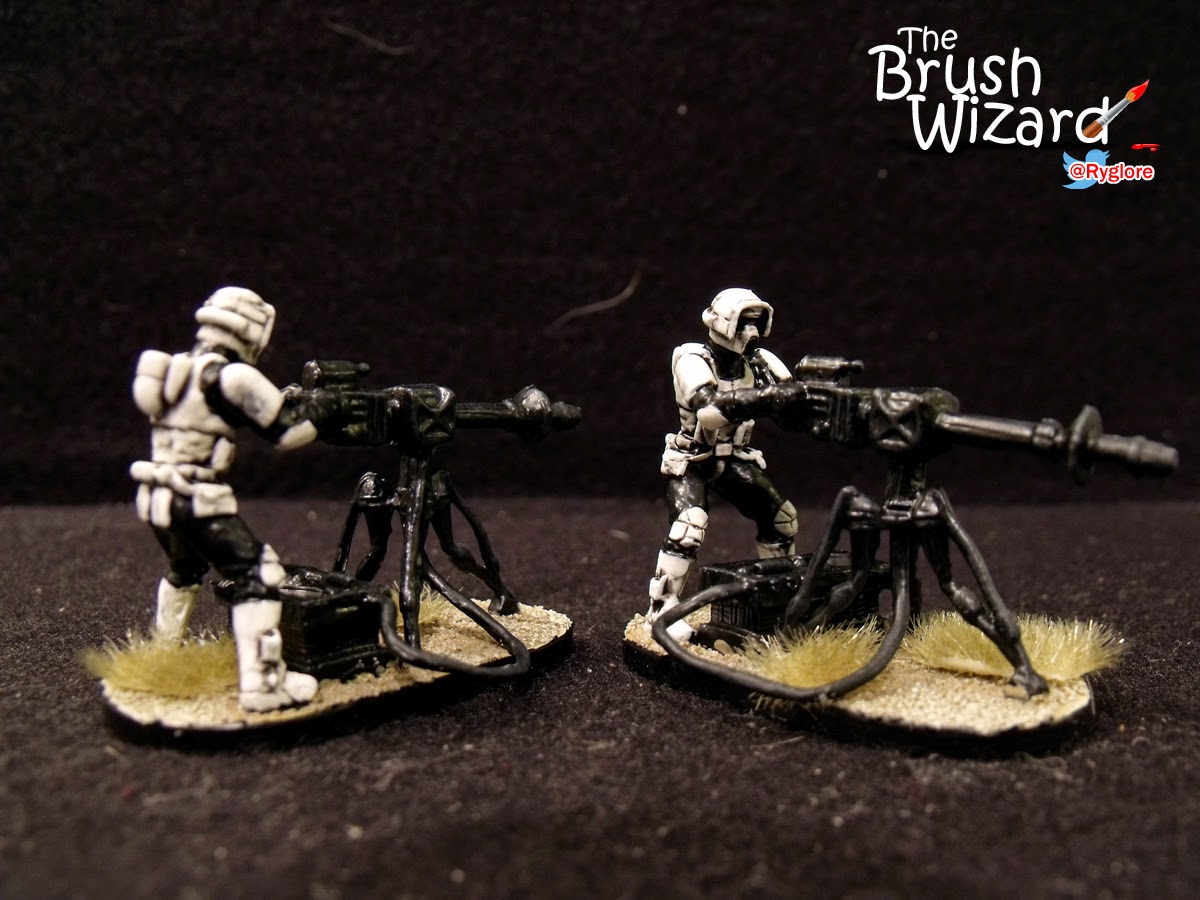 and the coverage wasn't even close to what I was looking for, usually ending up with streaky clumpy mess all over the base. I ended up painting the base with the texture paint and then covering the still wet paint with my sand mix. The sand
mix was then covered with paint and drybrushed with highlights for a desert sand effect.


The tufts are from Games Workshop as well and they are called Mordhiem Turf. They are essentially static grass glued onto a plastic sheet in clumps. Then you can peel them off and use what you want and
place tufts of grass in strategic locations.

They work well, but I did notice that once the super glue was on it it caused the dry white glue to curl a little bit and I needed to squish them down to get them set. But that's not a big deal. There are varying sizes of tufts too, so you can pick and choose different lumps as needed. And since they are dry looking, it fit in really well with my desert theme. I'd recommend them.

That's it! Star Wars: Imperial Assault is now a finished project! At least, until the expansion packs for it release, anyway. Now that it's completed, I can turn my attention back to the Museum and get that all
sorted. Plus, with the commission I can get a start on collecting the pieces I need for the chess set.

Stay tuned, I have a lot of stuff in the pipeline, you're not gonna want to miss out.