Alright, Star Wars is finished, Genestealers are done for now and I worked out a little of my Super Dungeon Explore bug and now I can get back to painting The Great Cyclopean Gemstone Heist. Actually, I'd already painted a lot of Painting #1 before I started working on the Genestealers, but got the mid-project blues for it and needed a break.

But I am happy to report that Painting #1 is finished and I have the pictures to prove it!

Originally, I was going to take a bit of a shortcut on this project. I had planned on printing off a couple of pieces and making frames for them, then calling it done. But, thanks to the all mighty Twitter, I was talked out of taking the quick any easy path. Instead, it was suggested that I recreate them for the project, something I had no confidence in at all.

The pictures in question, were John Carter of Mars by Frank Frazetta,
and the cover of the D&D 3e the Hero Builders Guidebook by Brom. I decided to start first with the John Carter painting, as I liked it better and I wasn't sold on the Brom painting.

I wasn't sure how to go about copying the drawing and after a few hours of fiddling with things, I decided that best way would be to use a stick

and pencil to mark locations and then transfter those locations to the new drawing. It was super tedious, but worked well. It did take a lot of time though and I ended up drawing the picture over the course of 3-4 nights.

Once the drawing was complete, and I had all my outlines down, it was time for paint! I started with the background and began laying browns
and red-browns down in a fairly loose fashion. I knew I wouldn't get photocopy results, so I just went with whatever felt natural. I worked the paint wet and blended them together naturally for a better result, as I knew layering them on each other wouldn't look right.

The same technique was used for the suns in the background. Though, for them I base coated the areas two different colors first and let them dry. This helped hide any brown I had gotten over the line, and helped give the suns slightly different color. The suns did end up being s little more similar in color than the original, but I like it. They actually got me thinking of getting a X-Wing board going and hand painting the planets and stars.

After the background was finished, I went through and painted all the humans and creatures with base colors first. Then I went back over them one at a time and filled in the details as best I could. The humans went pretty smoothly and weren't super difficult, except the female was a bit tougher. She turned out ok, but I'm not super happy with her.

The lizard on the right was painted similarly to the background, using a lot of wet paint and mixing them together to form highlights and shadows, as well as making the skin of it as similar to original as possible. Then finally the dead beast man on the bottom was painted the most simply. He's basically a dark, midtone and light, while his armor plates were painted using a mix of grey.

All in all, painting the female, the beast and the dead beast-man took me about 4 hours of work last night. And now I can say that this one is done! It turned out a lot better than I was thinking it would and am pleased with it. 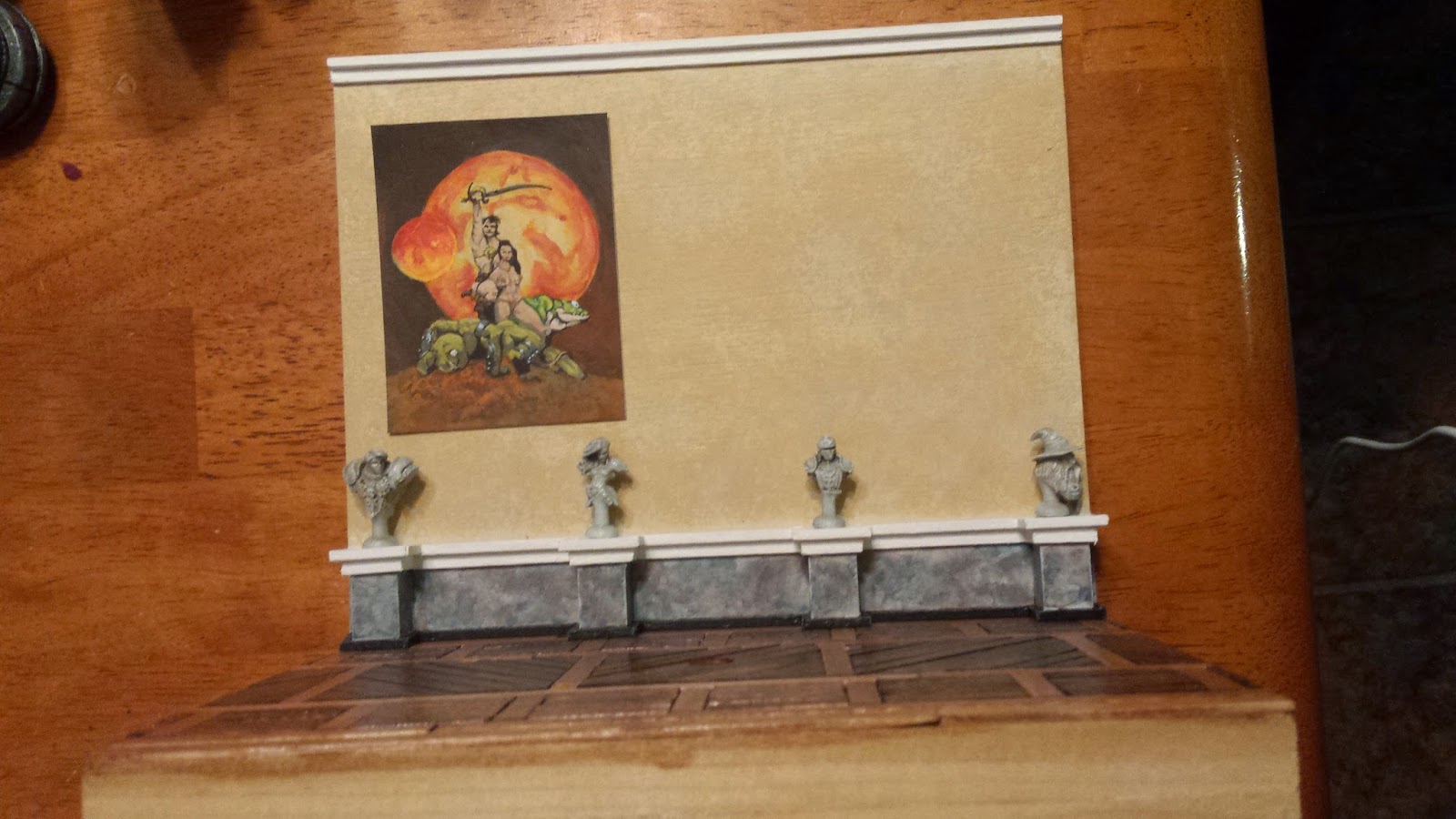 Once it was done, I cut the painting loose from the bristol board and had to test fit it onto the museum wall, for grins. It looks great on there, but will look even better once I add in some trim molding for it's frame. The frame will be made out of doll house trim and will need to be custom made, but after all the trim work I did for the back wall, it should be no issue at all.

Also, while I was working on this painting, I decided to ditch the Brom painting. I felt that they were too similar in theme and colors. So I changed it up and instead will be going with this: 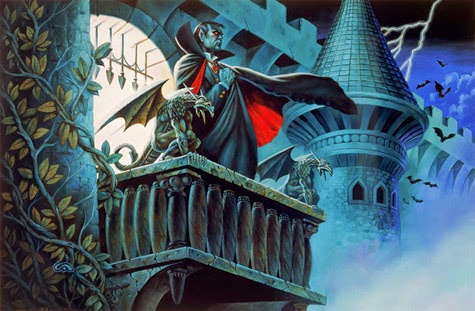