They all sat in the box for weeks, until I finally bit the bullet and assembled them in a marathon of sprue cutting not seen in my house before. But then, they sat again, while I worked on other projects and debated on a color scheme.

But now, the time has come for the Skitarii to finally be given the attention it deserves. Time to work out one of many new year resolutions. We're painting my first ever 40k army, y'all.

My favorite mini from the Skitarii has to be the Onager Dunecrawler, it is a really cool kit and to help decide on a color scheme I used my modified gunner, which I painted earlier. Originally I was going to go with red on the robes, since it's easier for me to blend and red is my favorite color.

But the red didn't look that great with the copper/brass of the main body, and it all got lost together. I needed a new color for the robes, since I was sold on copper metals.

Then I painted the #WAAC Ironclad Dreadnought and the greens from it really grew on me. For that project, I used a triad of Caliban Green, Warpstone Glow and Moot Green. They gave a really nice contrast from dark to light, much more than I am usually used to. 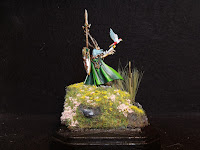 I liked it so much, that I decided to use them again on Araloth, when I did that project. This time I used wet blending to transition from one shade to the next as well. After this mini was done, I was sold on using these colors for my Skitarii.

Now, while I was on vacation during Christmas time, I was able to start work on the army. I started with my squad of Skitarii Rangers, which is a 5 man squad equipped with sniper rifles.

Each mini had their feet drilled and pinned, before attaching them to bottle caps for painting. Then they were all primed with GW Chaos Black spray.

From there, I began on their cybernetics and armor plates. These were painted in the following steps: 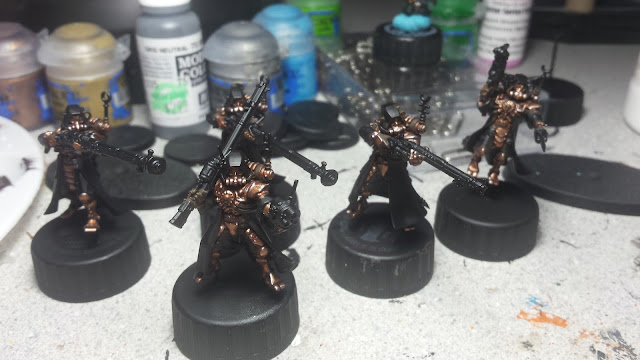 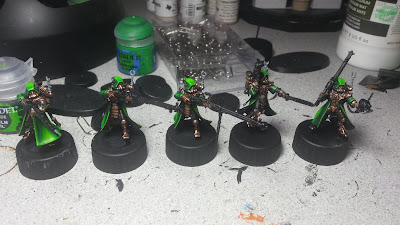 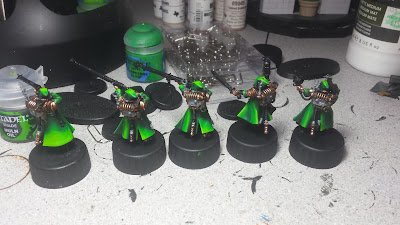 After the Warpstone and Caliban blends were dry I then blocked in Moot Green and went to work blending it into Warpstone Glow. I
had a few troubles on this step and it seemed like I was having a problem with my paint drying out on the mini too fast.

I'm not sure what the issue was, especially since I was using a mix of water, matte medium and slo-dri. But for whatever reason it gave me fits.

In the end the robes still turned out looking really good and I've gotten a bunch of complements on them. But I know I can do better and have smoother blends with more practice. 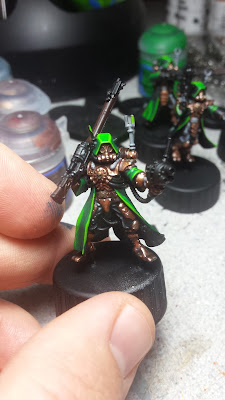 Luckily I have 5 more Rangers and 10 Vanguard to paint yet. Practice will be had.

Once the robes were done, it was time to do the pressure suits. These rubber suits keep the left over
fleshy people parts of the Skitarii from being damaged in the vacuum of space. There were rather simple to paint as well.

That's it for now. I've made some more progress other than this, But the post is getting kind of long. Check back later for more WIP posts on these guys, or you can see the progress unfold on Twitter @ryglore.