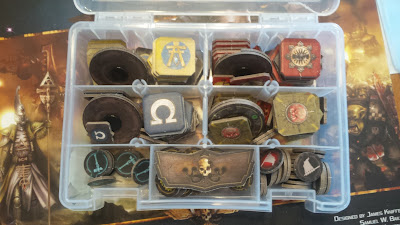 Forbidden Stars has a bunch of tokens, each for a different faction.  I have a thing for keeping my game components organized, and I'm not a big fan of having 5 million plastic bags. The box is big enough that there is room inside for a token box, so I decided to make another custom box like my SDE one. 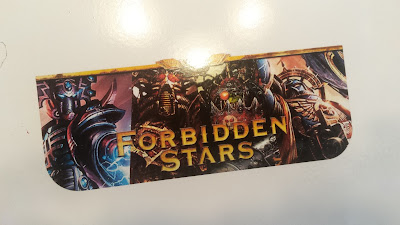 This box is a bit smaller than my last one, but it fits every token for each faction and all of the other tokens into it. It doesn't fit the dice though, and the combat/ reinforcement tokens share a slot, which is sad. But the box is just the right size for the space in the box, and I can live with having the dice in a plastic bag and the combat tokens sharing space.

The label was made using official artwork from Fantasy Flight Games, which I then cut up into the four section graphic. The golden border and game logo were taken from a scan of the rulebook and then cut out using the pen tool in Photoshop.

When it was all finished, I printed it on glossy brouchure paper, rather than sticker paper like the SDE one, and then I sprayed it with gloss enamel to help protect the ink.

Once it was all dry, a little cutting with the hobby knife and it was ready to adhere to the box. This was done with spray glue and carefully mounted to the lid of the box. 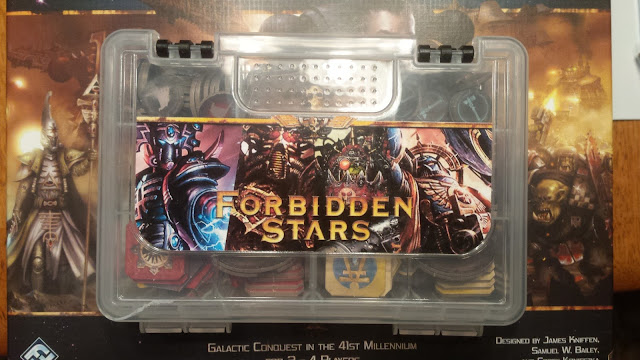 Overall, I'm really happy with this one, except for the Chaos Marine which turned out a little dark and is sometimes hard to see. Either way, it's always nice to flex my graphics training, since I don't use it in my everyday job.

I have one more token box to make and it's for Space Hulk. More info on that one soon.
Posted by Scott Ferguson at 6:13 PM
Email ThisBlogThis!Share to TwitterShare to FacebookShare to Pinterest
Newer Post Older Post Home