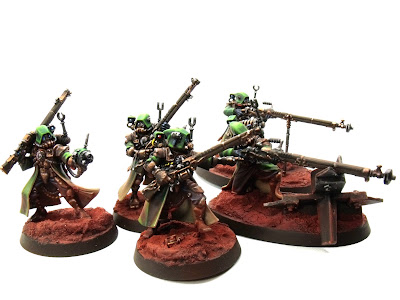 While I am a big fan of the Vanguard, the Rangers are probably a notch higher when it comes to how much I like the look of them.

There's something about their coats along with their hooded heads that I really like. But since I preferred the Vanguard's rifles over the Ranger's, I passed on using Rangers as the main body of my force. But, that meant I got to use the Rangers for something even more fun.

Originally, I assembled the box of Rangers in two 5 man squads each with a sniper rifle. They went on a shelf and were left to sit, with the rest of the army, for the entirety of time between their release and when 8th edition rolled out.

With the release of 8th, I picked up my index and the core rule book and started learning the rules.

That's when I realized that I assembled the models idiotically. I learned that 5 man squads with 2 sniper rifles was exactly what I wanted to do with them, rather than 1 sniper rifle per squad. But I didn't really like the standing sniper pose and I had lost one of the prop rods for one of them too. That's when I had the idea of converting them into crouching positions, and started cutting apart one of them.

In the process of modifying the crouched sniper, I found that I liked having one that was standing and one that was crouching, as it gave the squad a nice unique look.

After the crouched sniper was finished, I started assembling the Alpha model and  the other two squad members that were equipped with rifles. The overall goal of the squad was to have the rifle wielders look like they were on guard, but not actively aiming.

For the Alpha, I took a spare rifle and cut it apart, I then reworked a hand to make it look like he's holding it to the side and directing the snipers and omnispex carrier where to aim. He turned out pretty well, but I'm not entirely happy with how he mounts to his base.

One other Ranger, I equipped with an omnispex and a rifle on his shoulder. While the last one is seen holding his rifle in front of his chest, and looking into the distance.

Overall, I'm happy with these guys and they've performed pretty nicely in battle too, though I've only had a handful of games with them so far. I do eventually want to run a 2nd squad of them and have ideas for converting the snipers in that squad too.

That's it for now. Lets take a look at them!