Throwback Thursday totally slipped my mind, but here it is now! This week we're taking a look at another party member from our RuneQuest days. This time it's a Pathfinder Iconic Barbarian converted into an initiate of Babeester Gor. This one was super fun to do and involved weapon swapping and some minor conversion work (if you haven't noticed yet, I love conversion work). 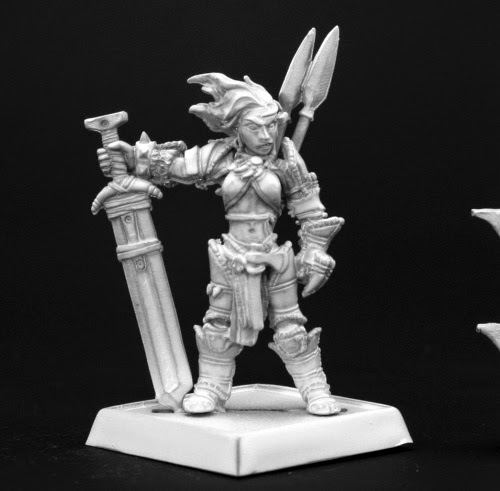 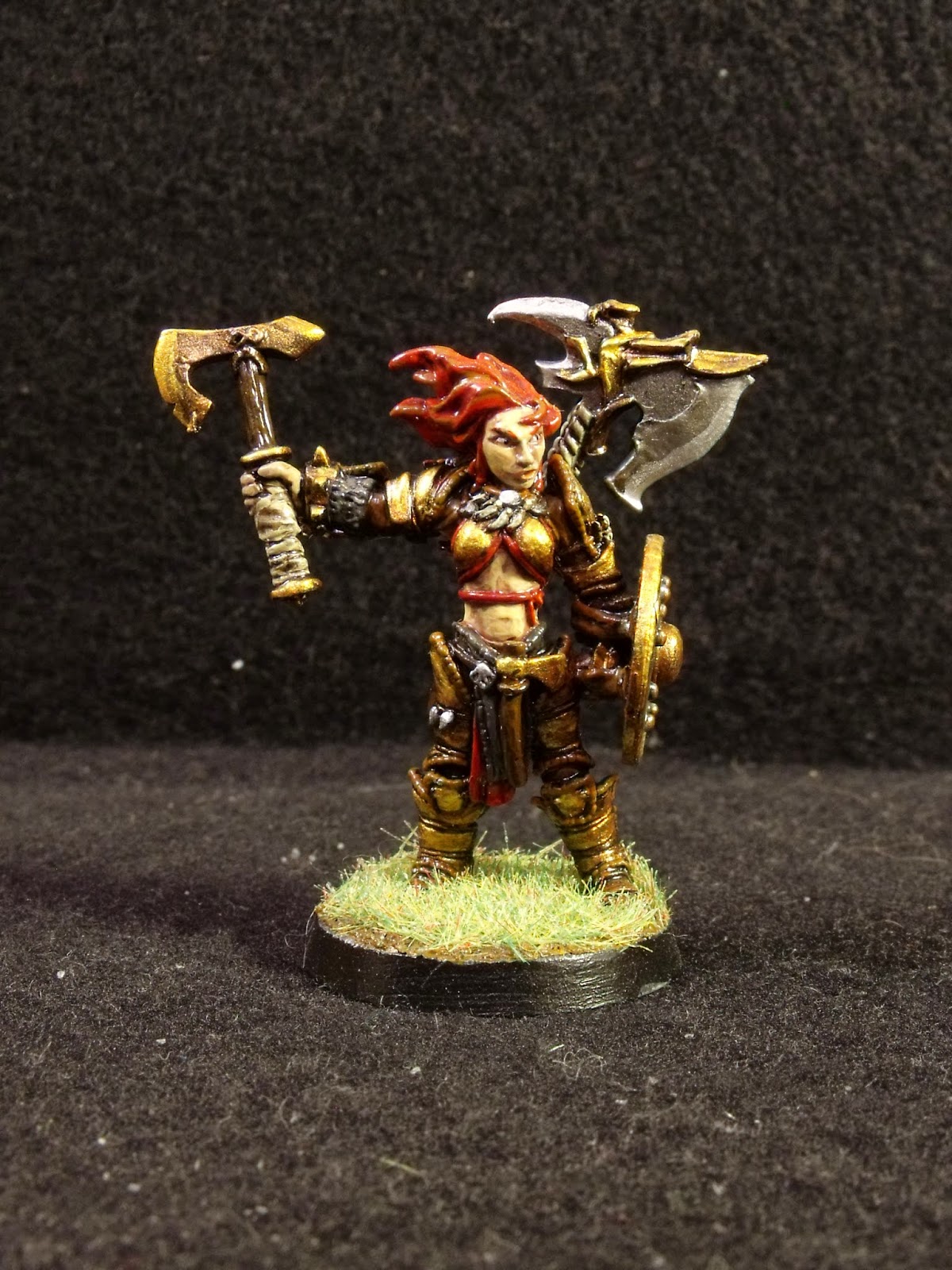 Now I can't remember this character's name, but she was a replacement character for my cousin after his original character either wasn't turning out to be what he wanted, or he was horrifically wounded in classic RQ fashion. Either way, he decided he wanted to play a Babeester Gor and as such he needed a new mini.

As long as we've ever played, Babeester Gor initiates have always been nomadic axe wielding man haters. In our original game, the GM's then wife ran one and the running gag was that she would cut off dude's man-bags and hang them from the handle of her great axe. Brutal. 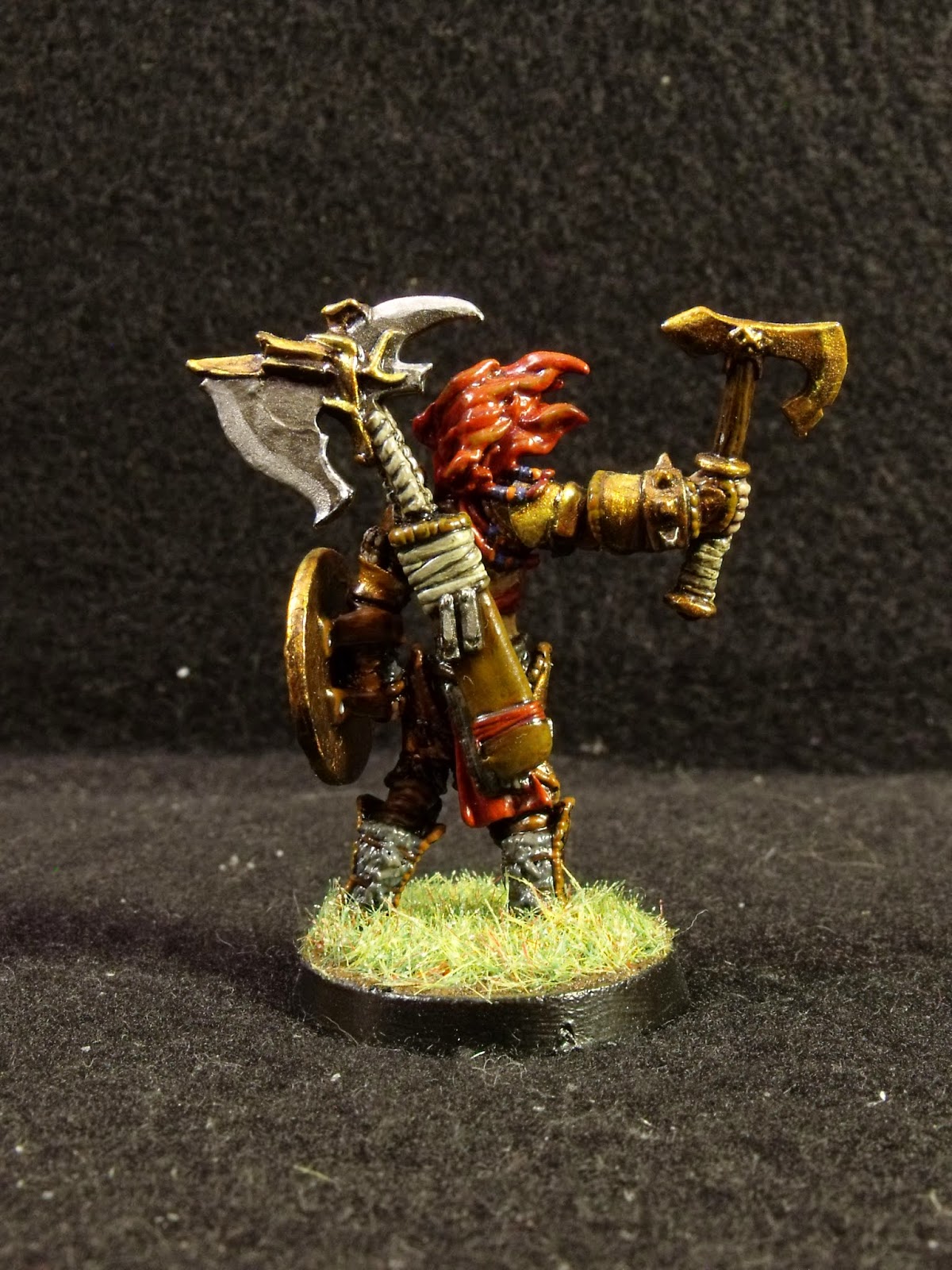 Since she was a nomad, I knew I needed a sweet female barbarian, and luckily the Reaper Pathfinder Iconic is one of the coolest. But, she wields a great sword and has javelins on her back. Luckily I've been doing weapon swaps for years and it was a fairly simple switch. She also has a claw on her left fist, this needed to be cut and filed down in order to attach her shield. Then once the shield was glued into place, as little green stuff was added to give it arm straps.

As for paint, the weapons and metal are mostly all bronze, except her great axe which is iron. In RQ certain deities are associated with different types of metal and in order to use iron, gold, silver, etc, you need to attune yourself too it. But bronze is the most common (if I remember correctly).  The rest of the colors went along wtih the barbarian theme, like leathers, bone and such. And finally it was based similar to the rest of the party to tie it all in.

I think she's one of my favorite conversions and looking at her makes me miss playing RuneQuest. Though, I'm already super nostalgic for it as it is. I think that's why I always gravitate toward books on deities in D&D and enjoy lethal gameplay. The fact that you never knew if you were going to lose a limb or die during a session was a huge rush.