This year I got to make a miniature for my older cousin, Mark. He's actually the older brother of Rob, who I made Apoca vs. The Minotaur for last year. This time I had an idea that I'd been thinking of for a few months, but didn't do anything with in case I drew Mark's name for our family exchange. In truth, I drew Rob's wife for my giftee. But, my mom drew Mark's name and after a little bit of convincing I was able to trade her names.

Much like with Rob, I didn't think buying minis alone was going to work for Mark, since we've not played in person in a few years now. But, this project goes back to our 3.5 days and one of Mark's best villains ever. 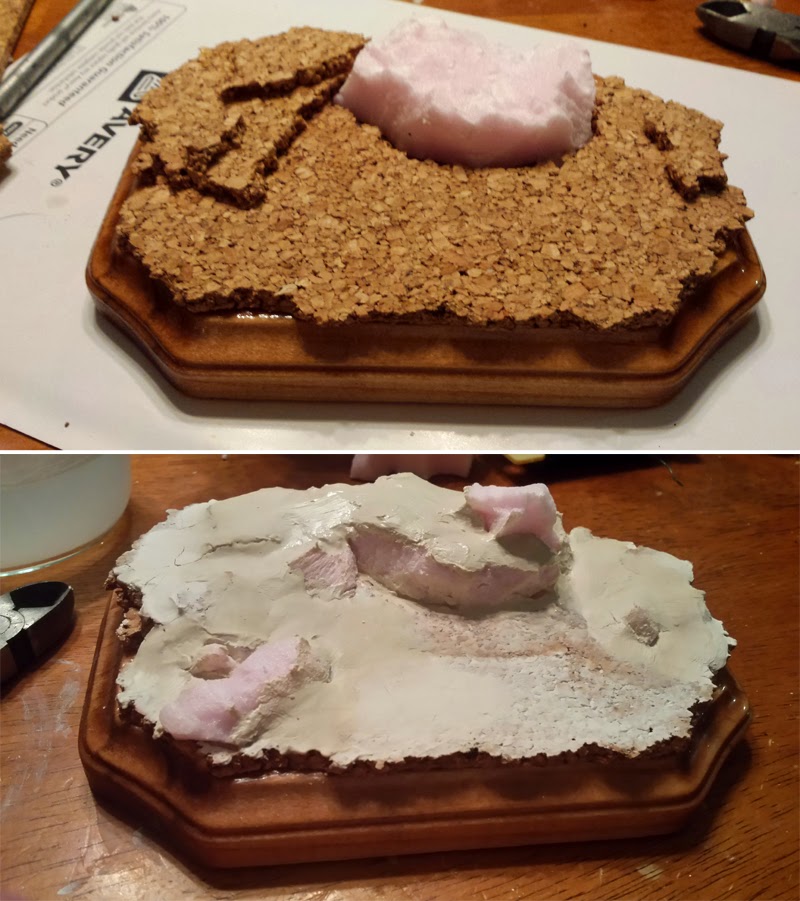 Enter Trex the Terrible. Trex was an Ogre Half-Dragon and he was bad ass as all hell. He went from an imposing figure of terror, to our arch-nemesis and finally to our lesser-of-two-evils ally before he vanished during our final assault and we never saw him again. Mostly because after we defeated the leader we were after and sucked into the plane of shadow... the game just kind of stopped. We still talk about that campaign today and it's always filled with nostalgia. I think it was even our longest running game too, as we were well into the 20s by the time we ended.

Now-a-days, half-dragons are a lot more dragon-like than in earlier editions of D&D. But back in AD&D days they were specifically human-like in appearance with some dragon-like features giving away their lineage. Then in 3rd Edition half-dragons gained more draconic features, including wings if they were large enough. As such I went with an ogre with wings and scales, rather than a full fledged dragon-man.

I started the project by working on the base. This was mostly because I already had the materials on hand and wanted to get things rolling. This time around I mixed the base with pink foam, cork and clay. The foam was formed into rocks and then surrounded with cork which was piled up in places for hills. And finally the cork was covered with clay to smooth it all out.

After the clay was dry, I spread the old trusty drywall filler on the foam to give them more of a rocky appearance. The rocks were painted with a neutral grey and then covered in washes of various different colors. Finally after a wash of black ink, I dry brushed a few greys onto the rocks. I think they turned out really well.

Trex himself is made of a Reaper Hook Mountain Ogre from their Pathfinder line and a set of loose wings from a Reaper Amber Dragon. I spent the entirety of 007: Casino Royale attempting to cut/file/shape the wings to fit properly. But after a few attempts and failures, I was able to knock it out.  The wings were finally super glued into place with pins and poster tack holding them into place overnight. Then after a work day of sitting there I 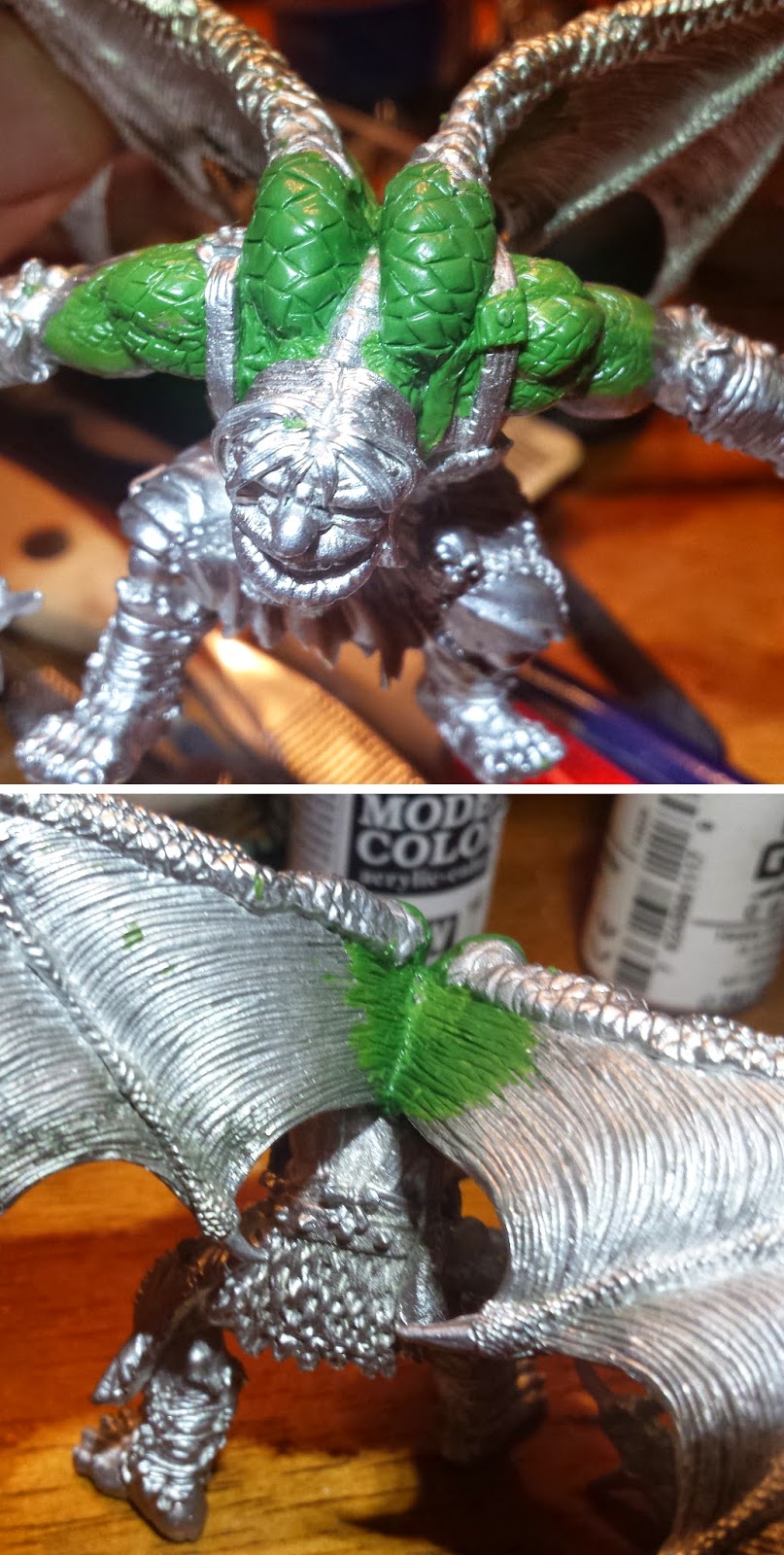 Trex was half a red dragon and as such he required red scales. Also, according to AD&D rules, half-dragons skin tone are tinged with the color of the parent dragon's color. So I base coated him with red and then worked it up with flesh tones until I was satisfied with the result.

His clothes are a patchwork of leathers. I made sure to color each patch a different shade of brown or tan when I was painting them. I even made his straps different colors to go along with it. Then once I was done with it all, I used some diluted ink to add some brown, green and red stains to them.

Finally after he was all painted up, I sprayed him with Krylon Matte Varnish and glued him on to the base. I'm really pleased with him and how everything turned out. Like I've said before, I really dig conversions and with this one it's the first time I've done extensive sculpting work too. Here's hoping that he loves it! I'll post an update on this post after the party.

I saw his face change from confused to wonder as he held it up staring at it. When his brother asked him what it was he responded with "Its Trex! You know, the villain I made up for our old D&D game!" Then Mark put two and two together and remembered that months back I was asking him questions about Trex. Realizing I was probing for info in case I got him for the gift exchange.

He showed it to everyone and I ended up fielding a lot of questions about how I made it. He ended up staring at it for a solid half an hour too, which was an awesome feeling.

And now, I give you the fully completed, Trex the Terrible! 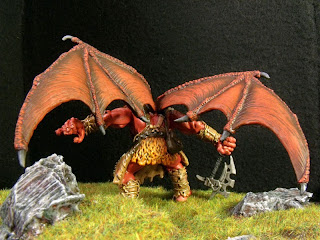 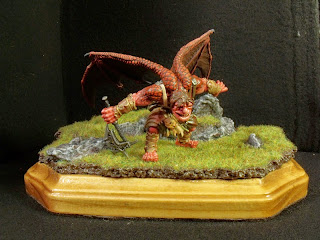 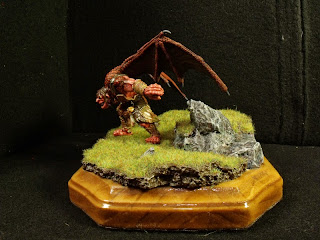 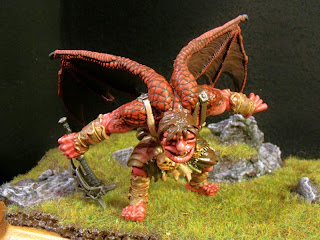 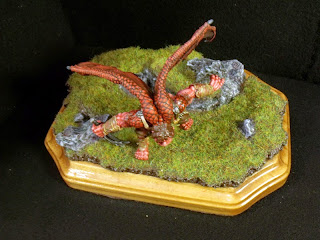 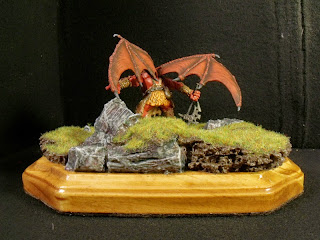 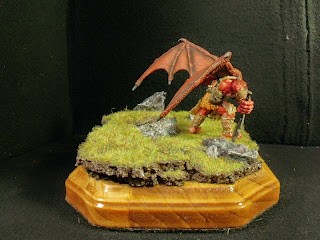