Progress continues on the WAAC Ironclad Dreadnought. I now have all of the weaponry painted with metallics and the first 3 steps of the Green color scheme have been done. Its been pretty steady work, though I am working with really thin paint to try and keep the armor plating smooth, that means I have to wait for dry time a bit more. 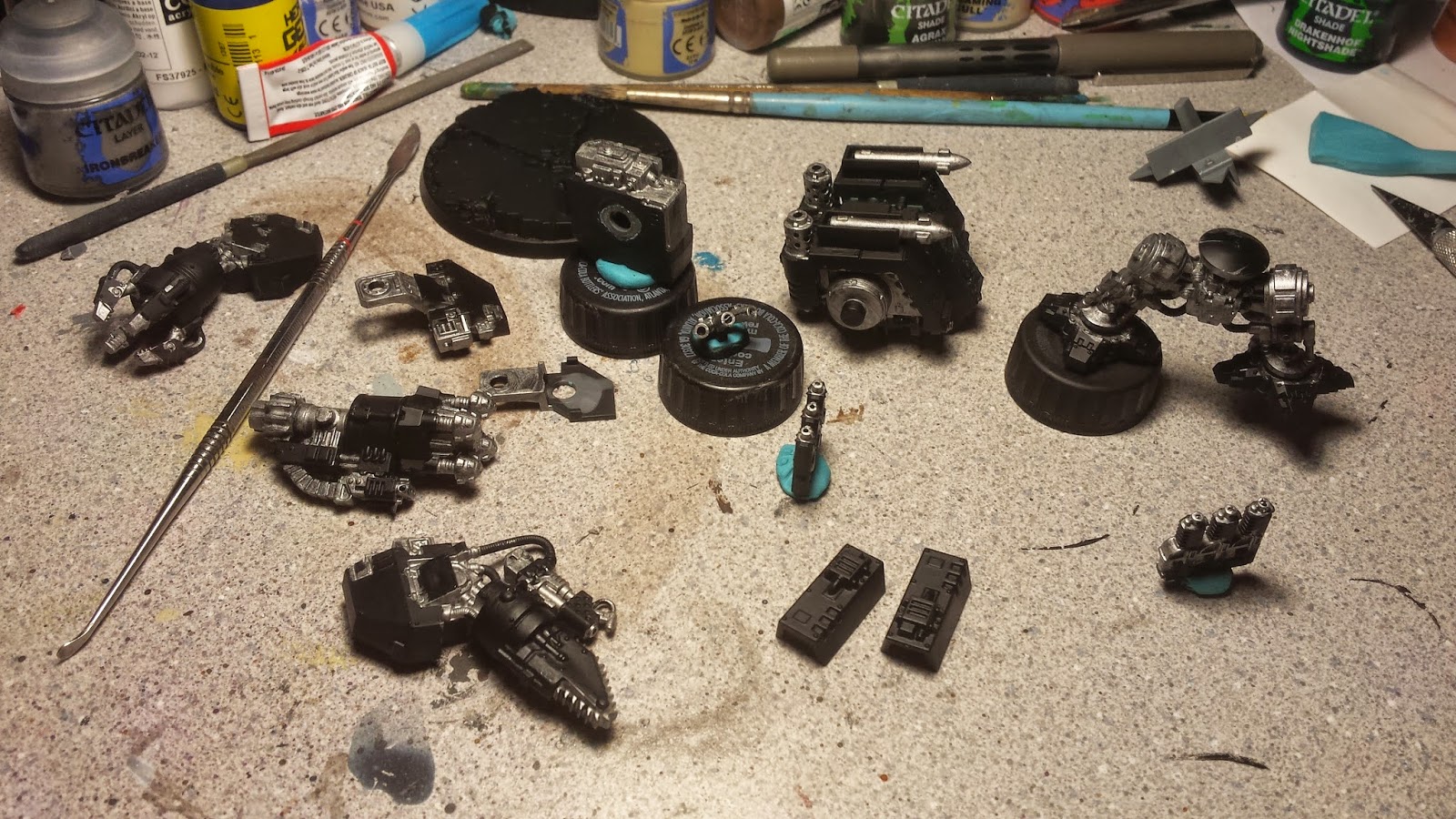 I began with a black basecoat to help with shadows in hard to reach places, but now I wish I would have gone with white instead. Green is one of those colors that doesn't like to cover over darker colors and I ended up doing more coats than I'd have liked. 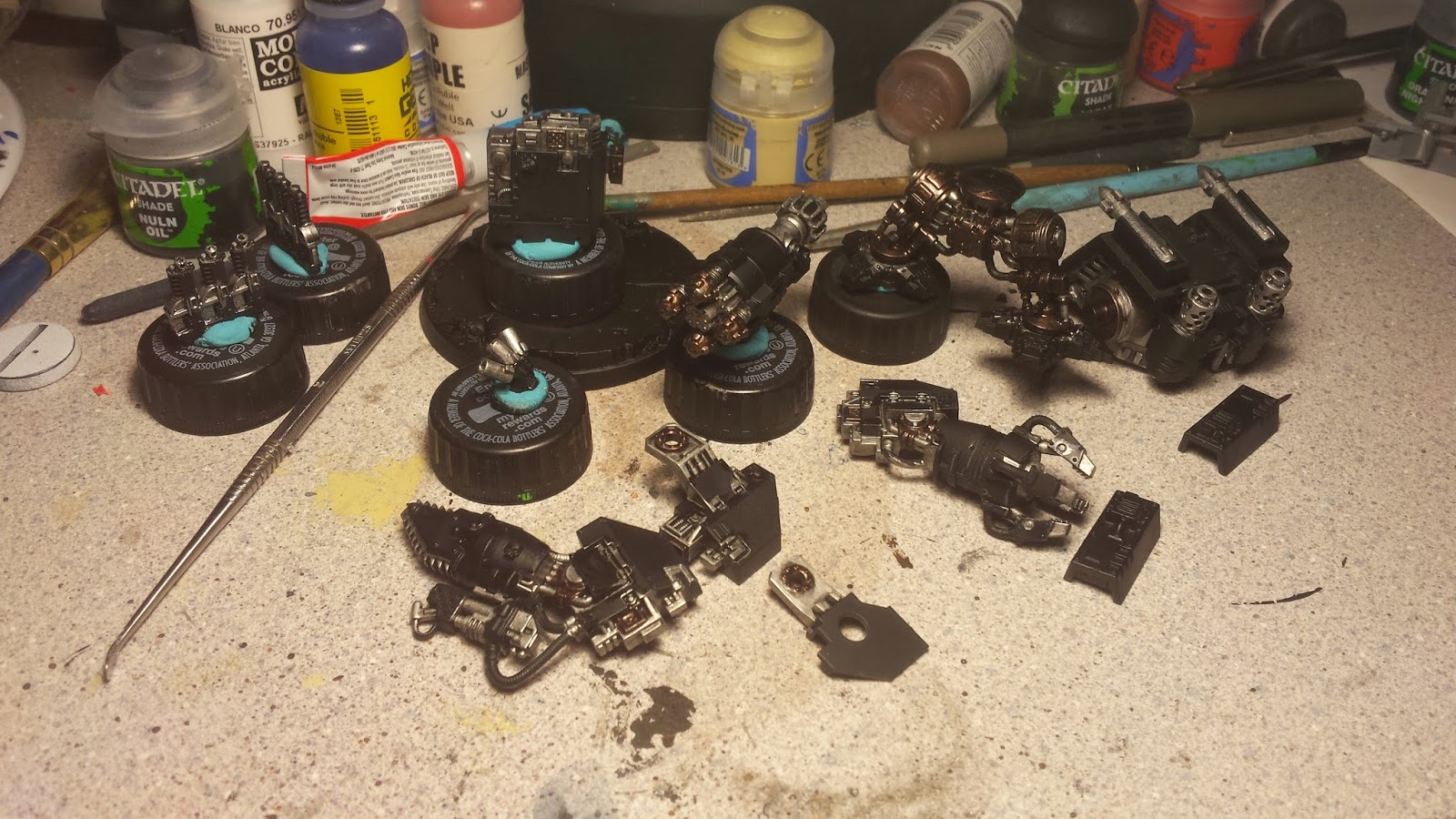 I started with all of the metallics first. I painted the entire skeleton with GW Ironbreaker Silver, which was washed with Nuin Oil and then
repainted with more Ironbreaker Silver. I'll add in Runefang Steel as highlights in visible areas, once the legs are glued to the body. 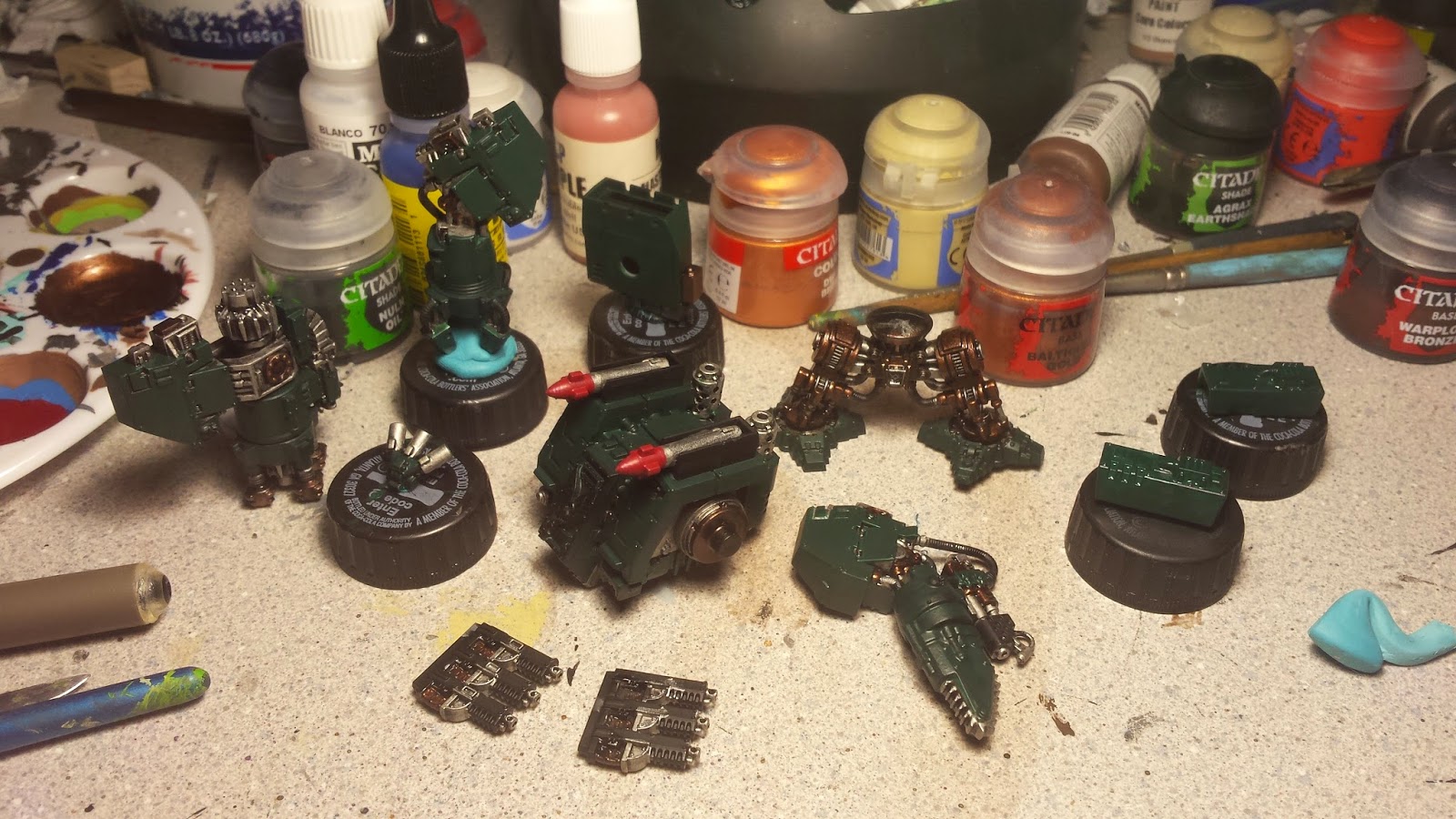 Looking over the framework, I decided that the silver was a bit much and needed to be toned down a a little. So I went to the glass case and grabbed my old Dreadnought to see how I did it before. That's when I
decided to add some GW Warplock Bronze to the weapons and legs. Once they Warplock Bronze was on the mini, I washed it with some Argax Earthshade. The Warplock Bronze was then highlighted with a mix old GW Dwarf Bronze, lightning it up a bit. 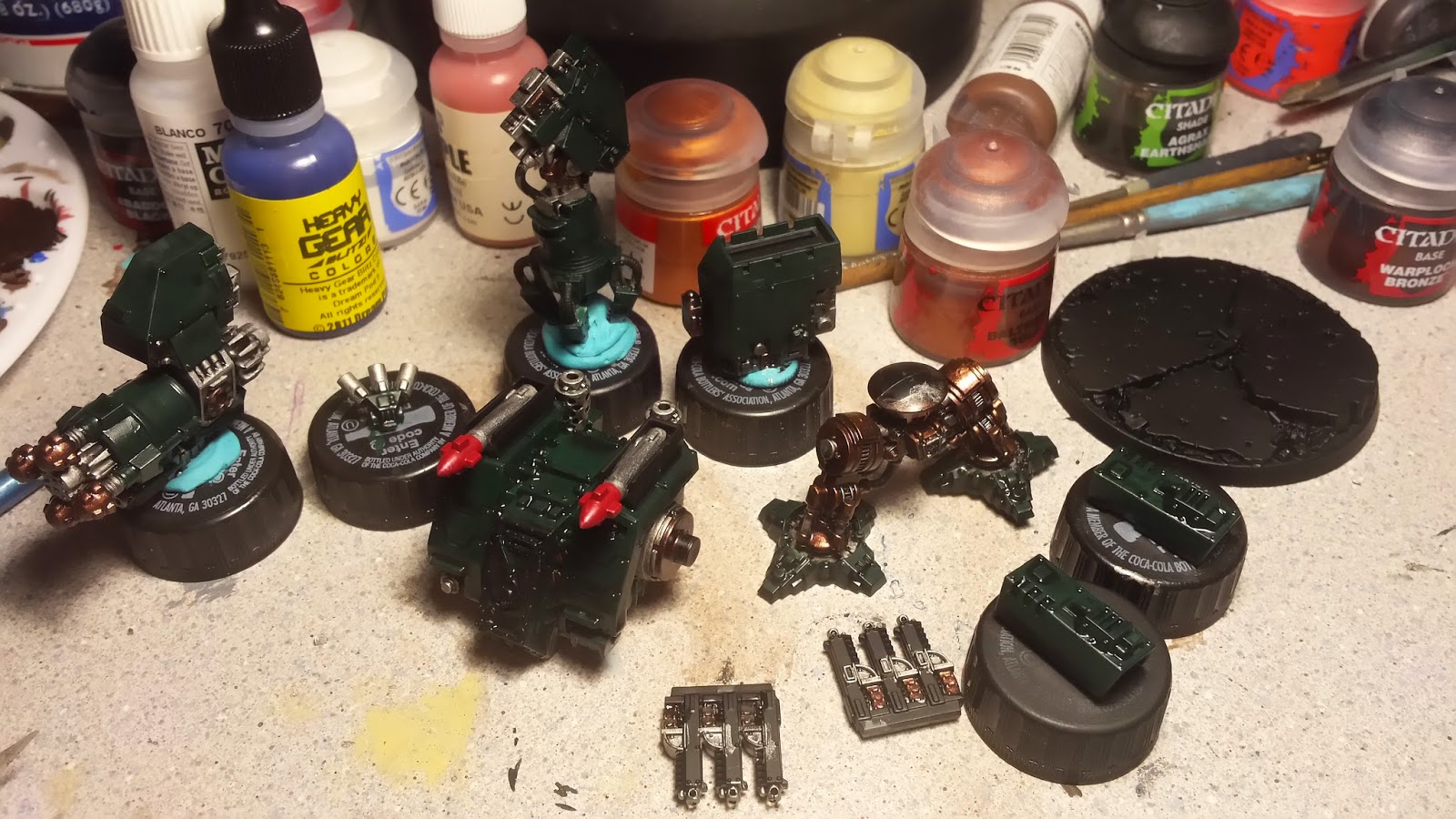 Once the metallics were done, it was time to get started on the armor plating. The agreed upon color scheme goes something like this: 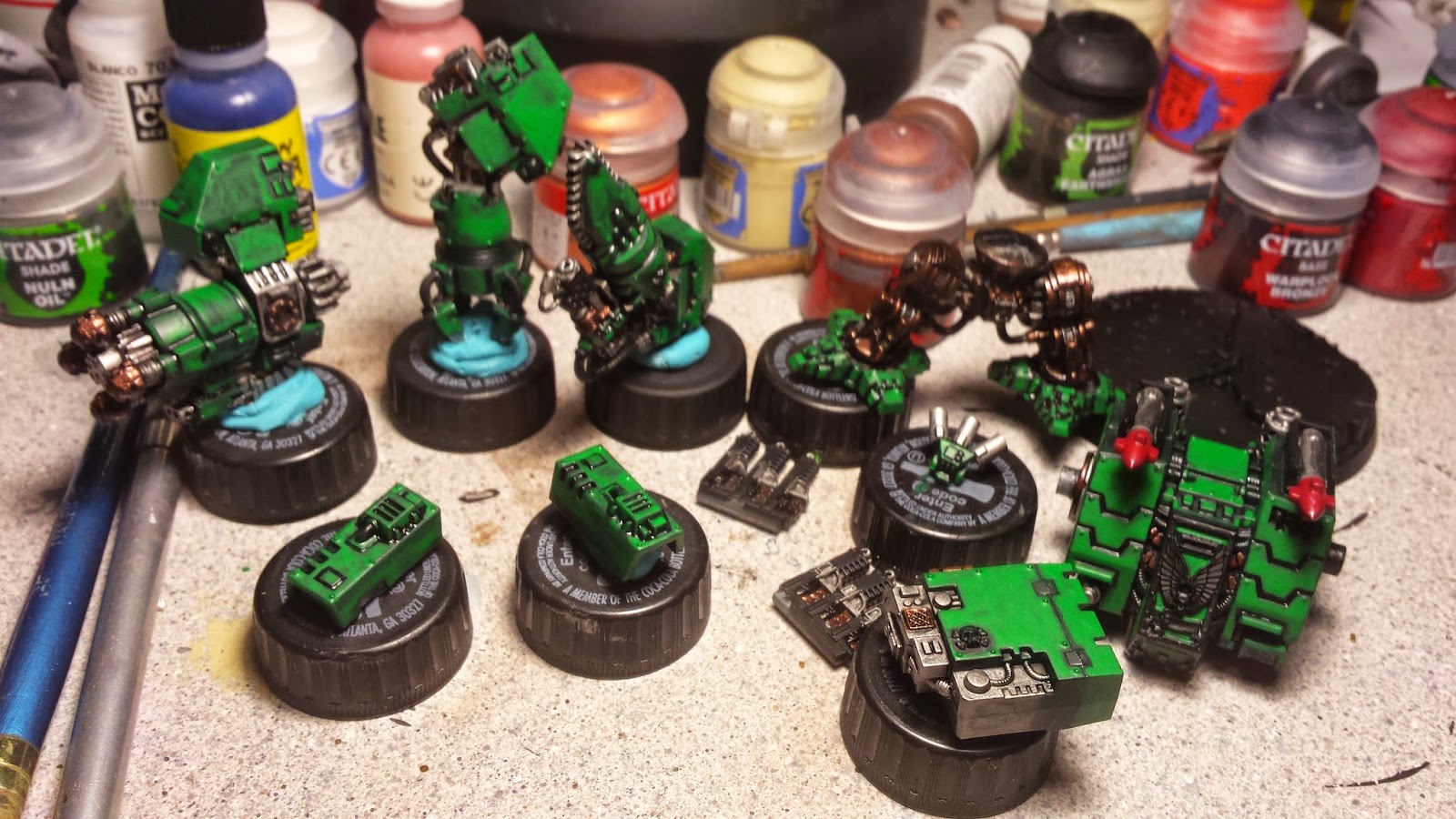 I began with Caliban Green, watering it down a bit to do thin coats. It worked well, but it was hard to tell what was colored properly thanks to the black undercoat. It was here that I realized that I've reached that point where I actually prefer using white undercoats, instead of my old standby of black. 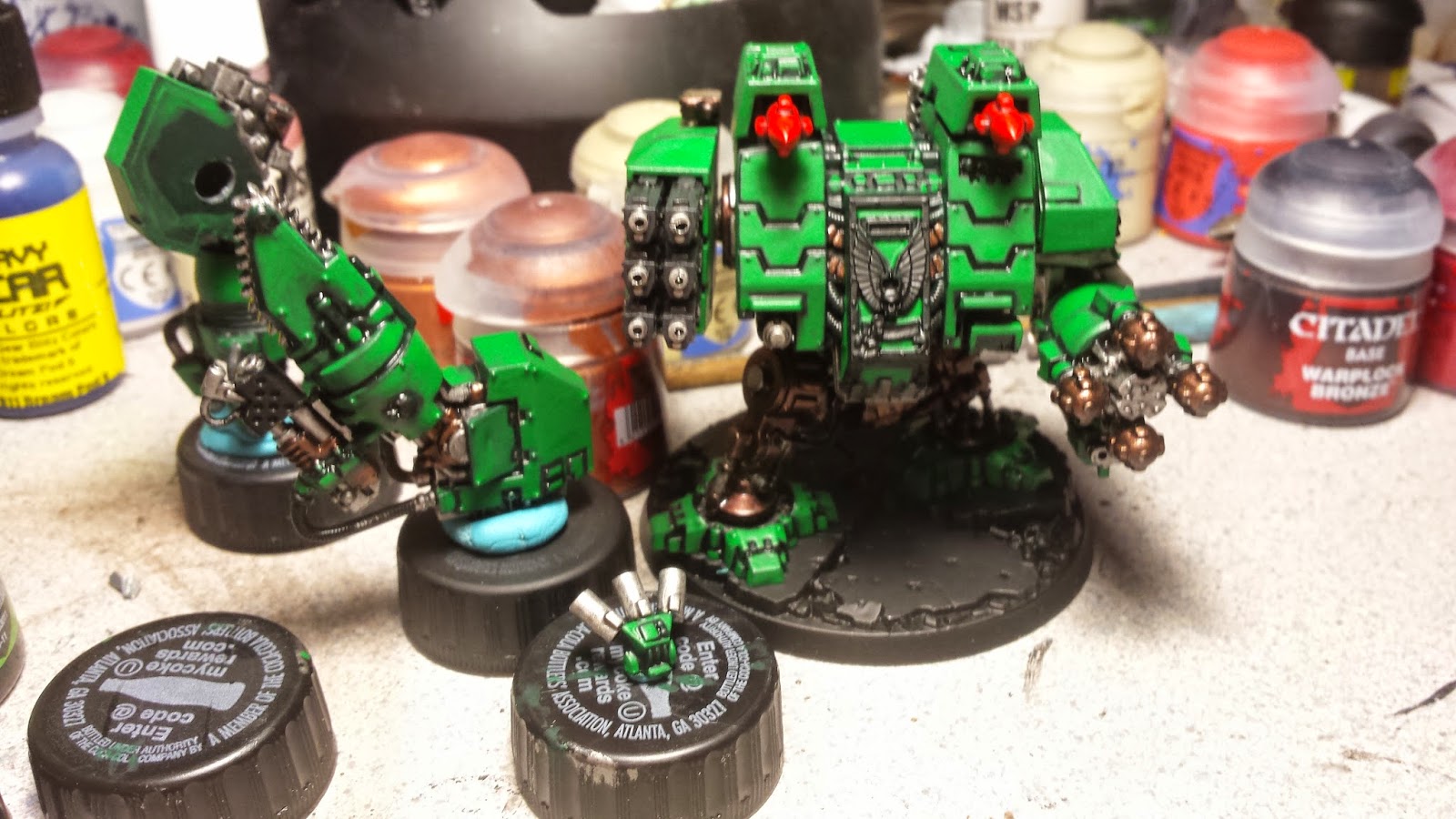 I ended up doing 2 coats of Caliban Green before I moved on to the Nuin Oil wash. The model was washed over completely and then allowed to dry overnight.

The next night I began the process of coloring the plating with Warpstone Glow, again with thin coats. Since I lack an airbrush, I need to try to keep the smooth surfaces as smooth as possible and limit my brush strokes. I think it worked out alright, though the color has a bit of variation in it, even after 2 coats.

The ends of the Hunter Killer missiles were also painted during this time. I started with a coat of Khorne Red over the silver, then I followed it with some Army Painter Red. The tips will have a white cone on them and a silver tip, when I'm all done.

But that's it for now. Tonight I plan on adding shadows back into a few areas with a glaze or two of Caliban Green. Then I'll start working on edge highlights.
Posted by Scott Ferguson at 4:00 PM
Email ThisBlogThis!Share to TwitterShare to FacebookShare to Pinterest
Newer Post Older Post Home