It took 7 tubes of Kragle, many hours and even some blood (put a 1/2" long slice in my thumb with the x-acto knife) but I finally have all of the Relic Knights figures glued and mounted on bases. So starting today and for the next 6 days, I'm going to go through them all faction by faction, with pictures of each package's figures in a Week of Relic Knights! 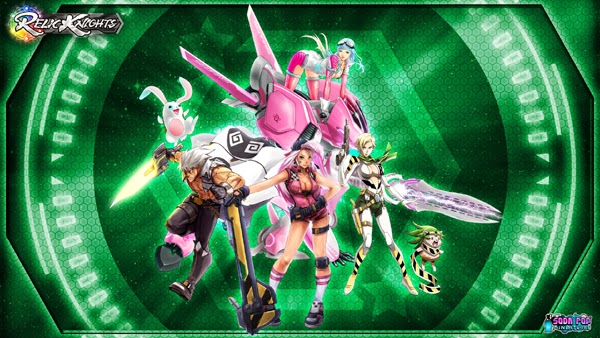 These speed junkie street racers are the main reason I got into the Kickstarter to begin with. I thought Malya's Relic was sweet and I couldn't pass up the ultimate cuteness that is Mr. Tomn. I even bought the metal promo version from Soda Pop's webstore. Plus the Hell's Belles hover bikes just screamed to be painted up with neon colors and light effects. I'm hoping that I can get to paint them up soon, with custom made transfer decals and I might have to do custom flying bases... Anyways, on to the hotness! 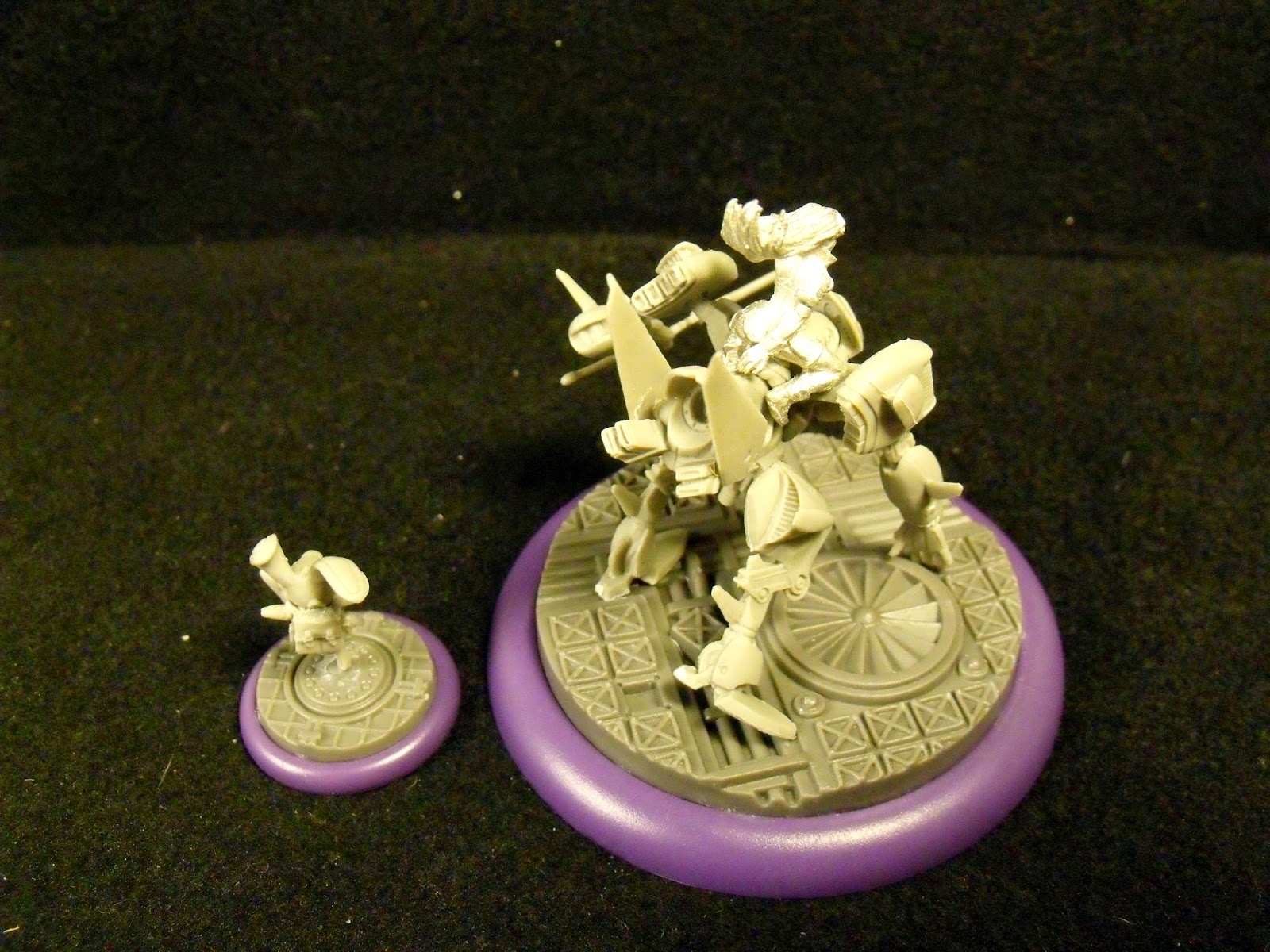 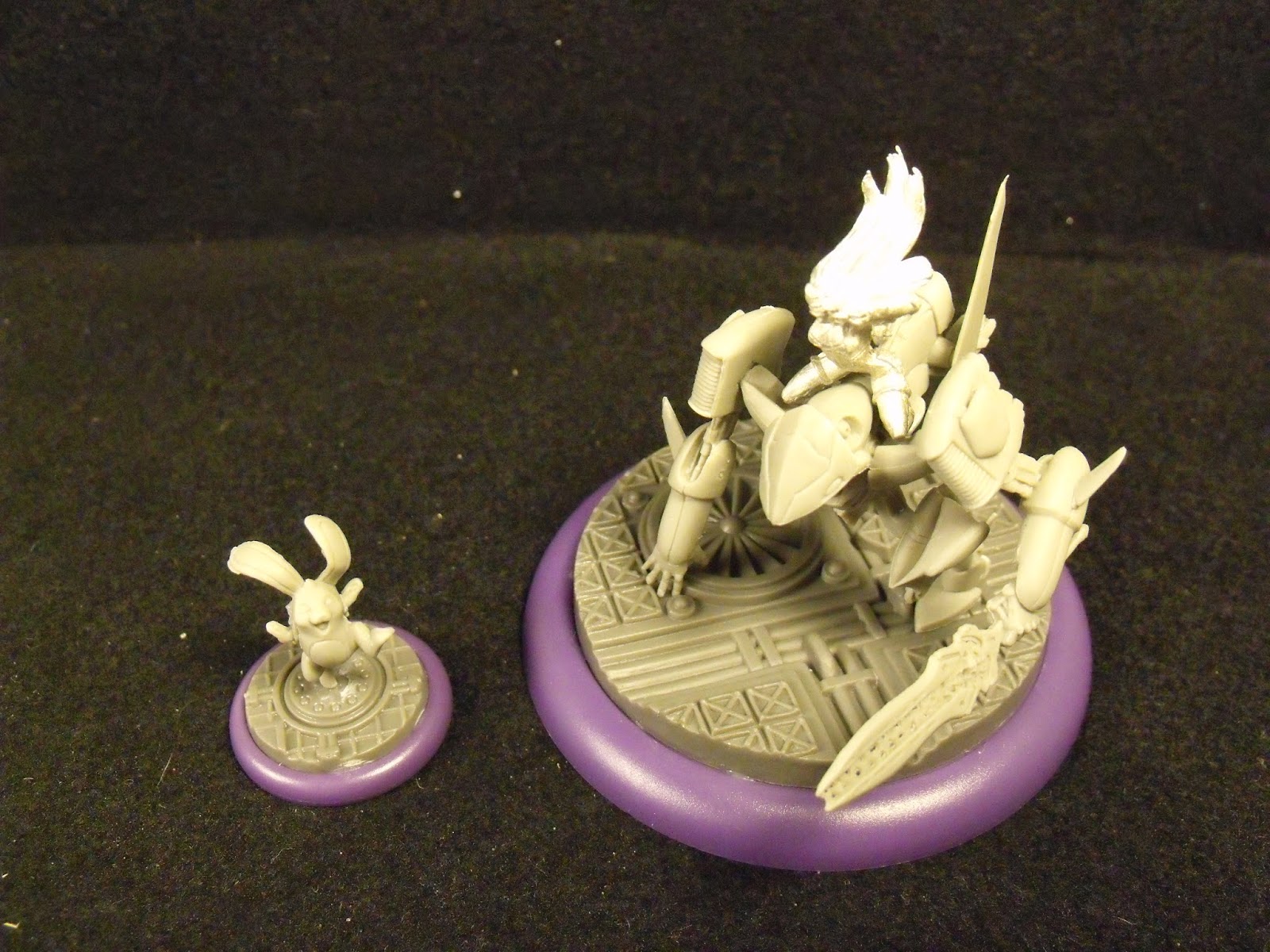 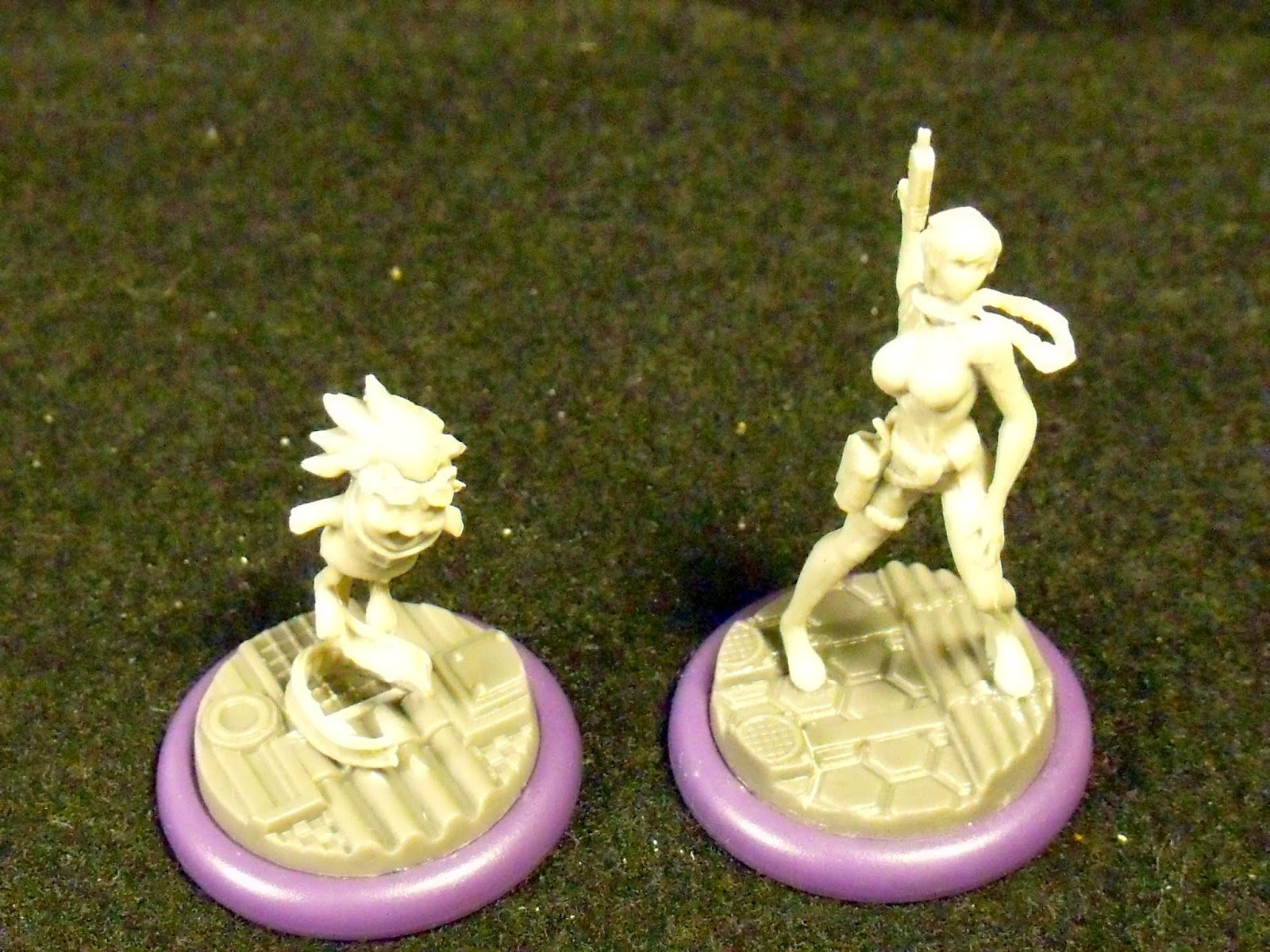 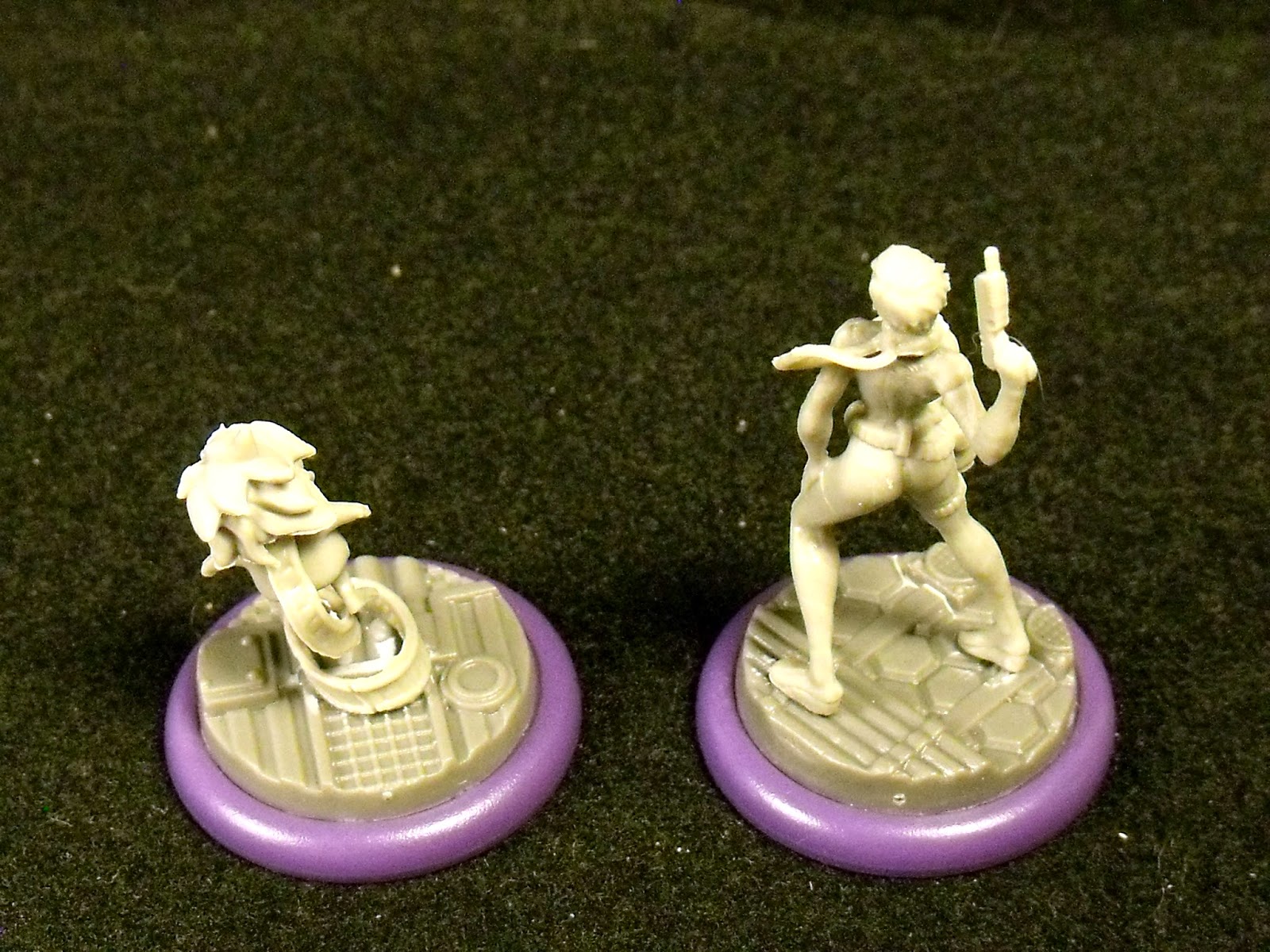 Marie-Claude is the main knight included in the Battle Box. She was originally a extra exclusive figure, but was moved to the Battle Box when they did the contents shuffle. Some folks were pissed, others were indifferent. I was the latter. Marie-Claude herself was a little bit of a pain to assemble, thanks to her scarf and the angle of her head. The neck of her head attaches to the body through the scarf and I don't understand the reasoning for it. Esmee was also a slight annoyance. The Cypher uses it's scarf as it's mount for the base. It's kind of springy and I ended up bending mine a bit to get it to stand up straight. Plus all that holds it to the base is the edge of the scarf, so no pinning allowed. 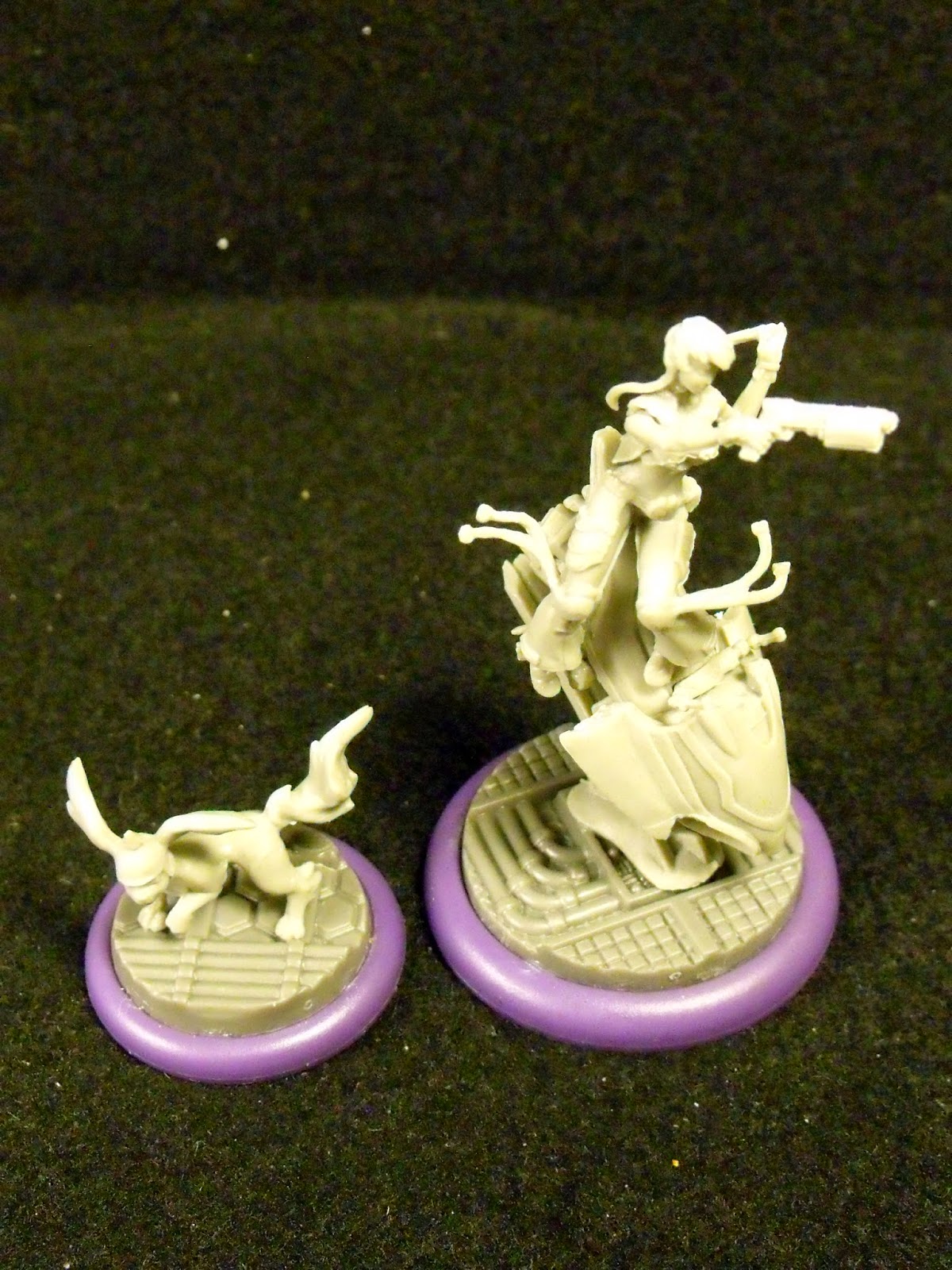 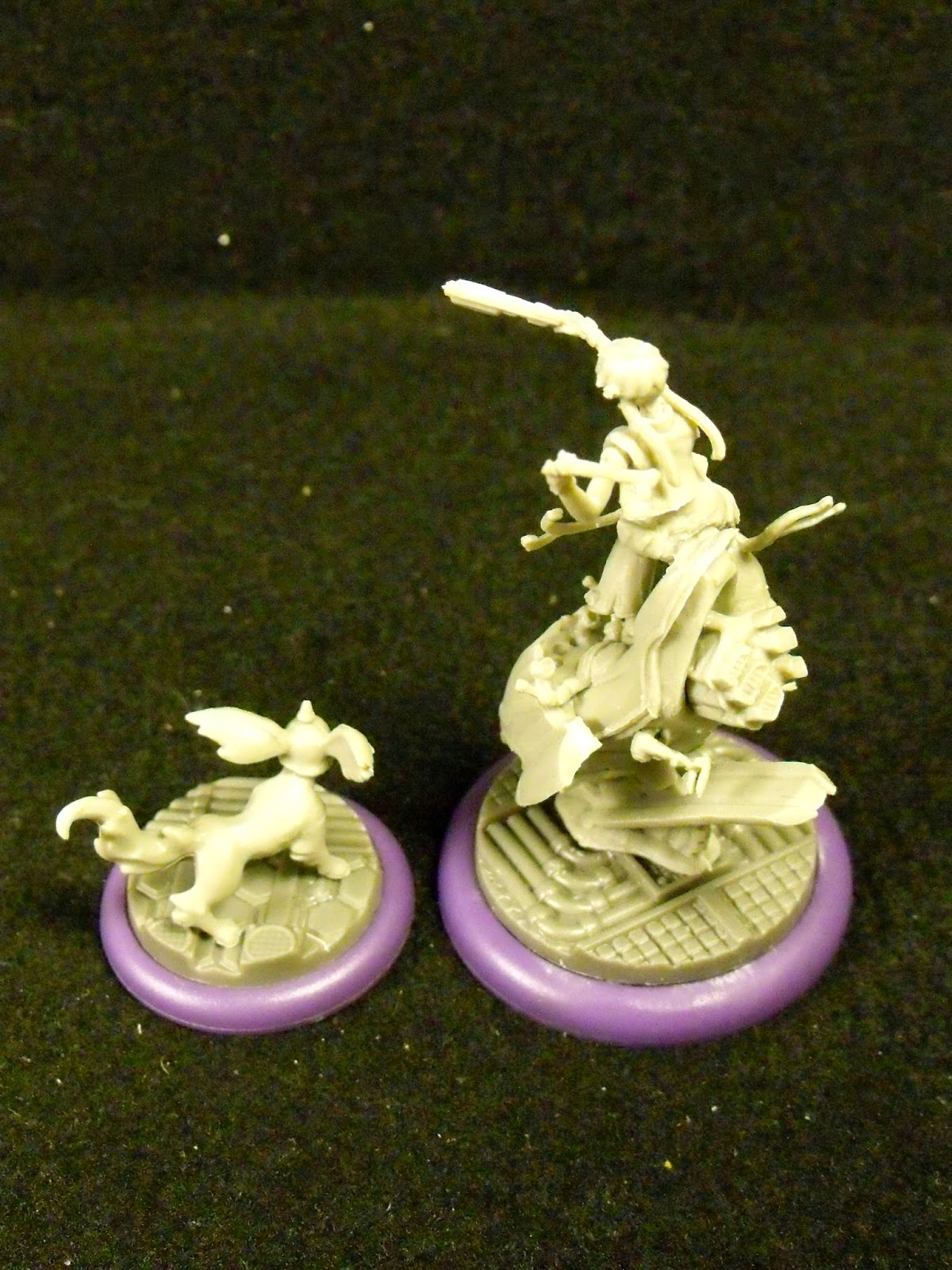 Suicide Queen is the leader of the Hell's Belles and as such he's on a jet bike. I like this mini so much more than the concept artwork, it's just a lot more dynamic. It shows attitude, and I like that a lot. The mini itself was kind pretty simple to put together. The only problem I had was getting the arm with the bone in it attached, as I wasn't sure how it was supposed to go and the key slot was kinda not helping. So I mounted it in a cocked and ready to throw position, which I think works well. 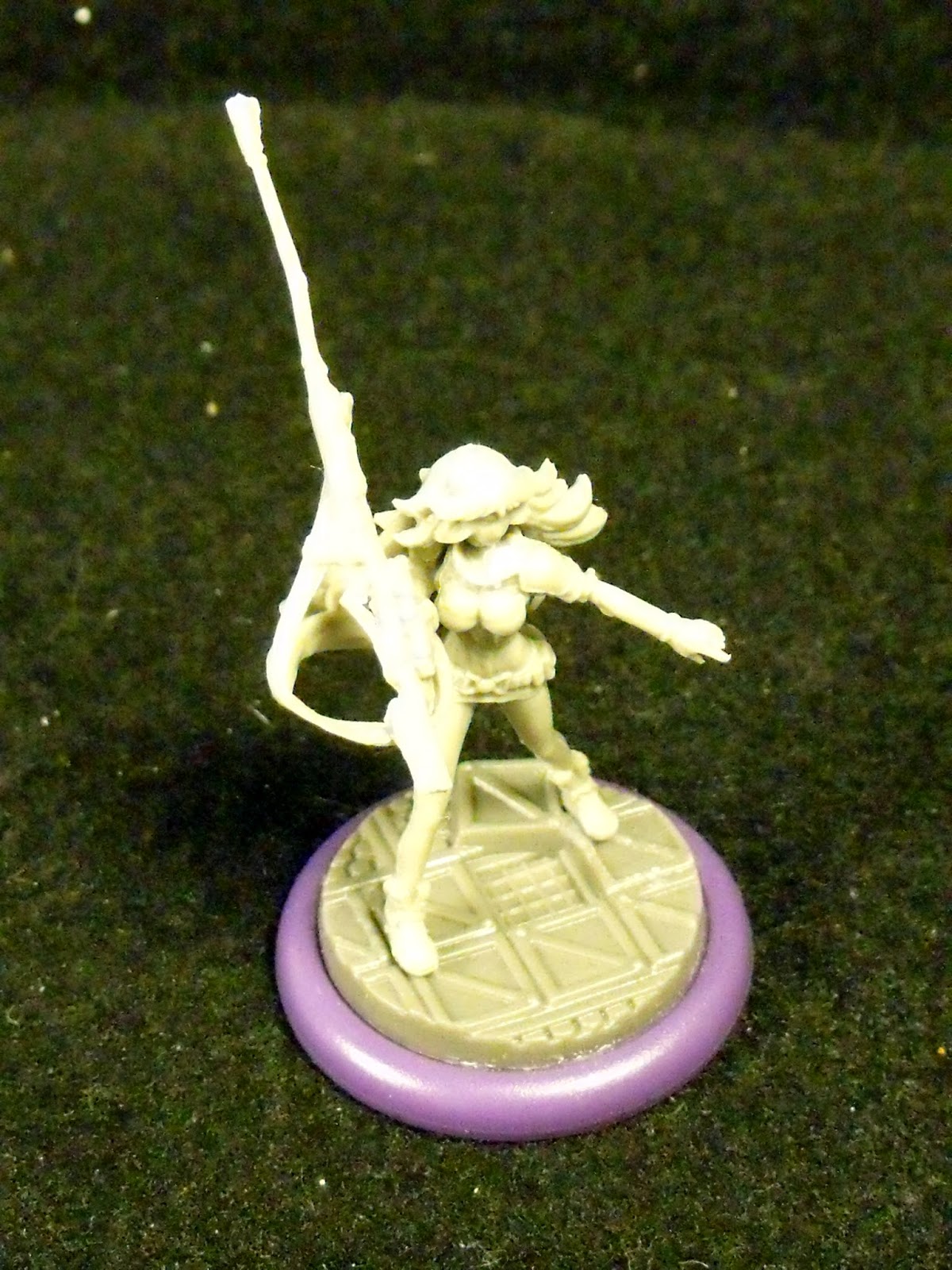 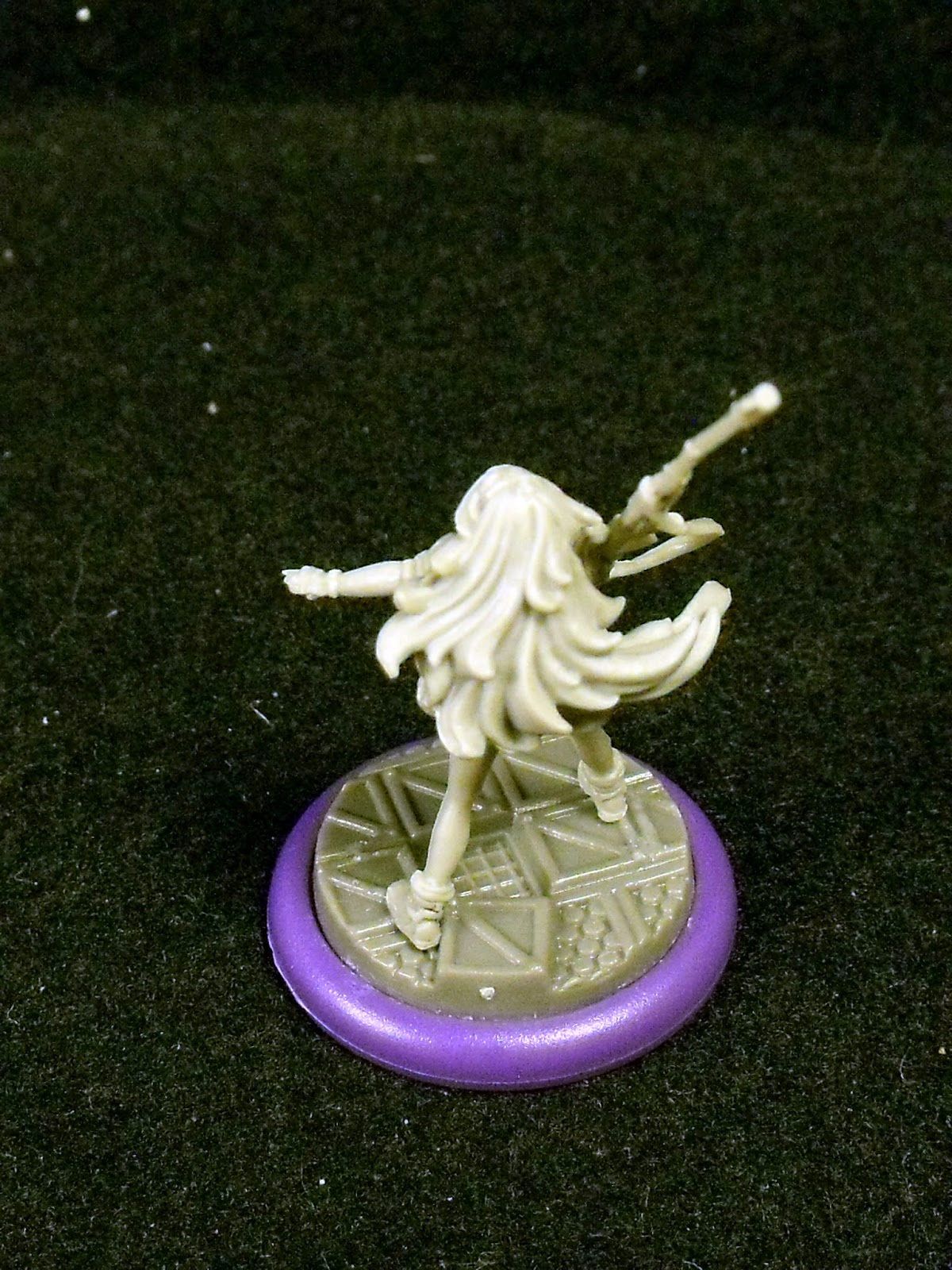 Rinn Farrah's assembly was pretty simple and I'm glad that her gun is mostly straight. but I like her Darkspace model much more (we'll get to that later this week). This one seems a little on the small side of scale, which is kind of a problem with the game. There seems to be a lot of variation in model sizes for human characters. 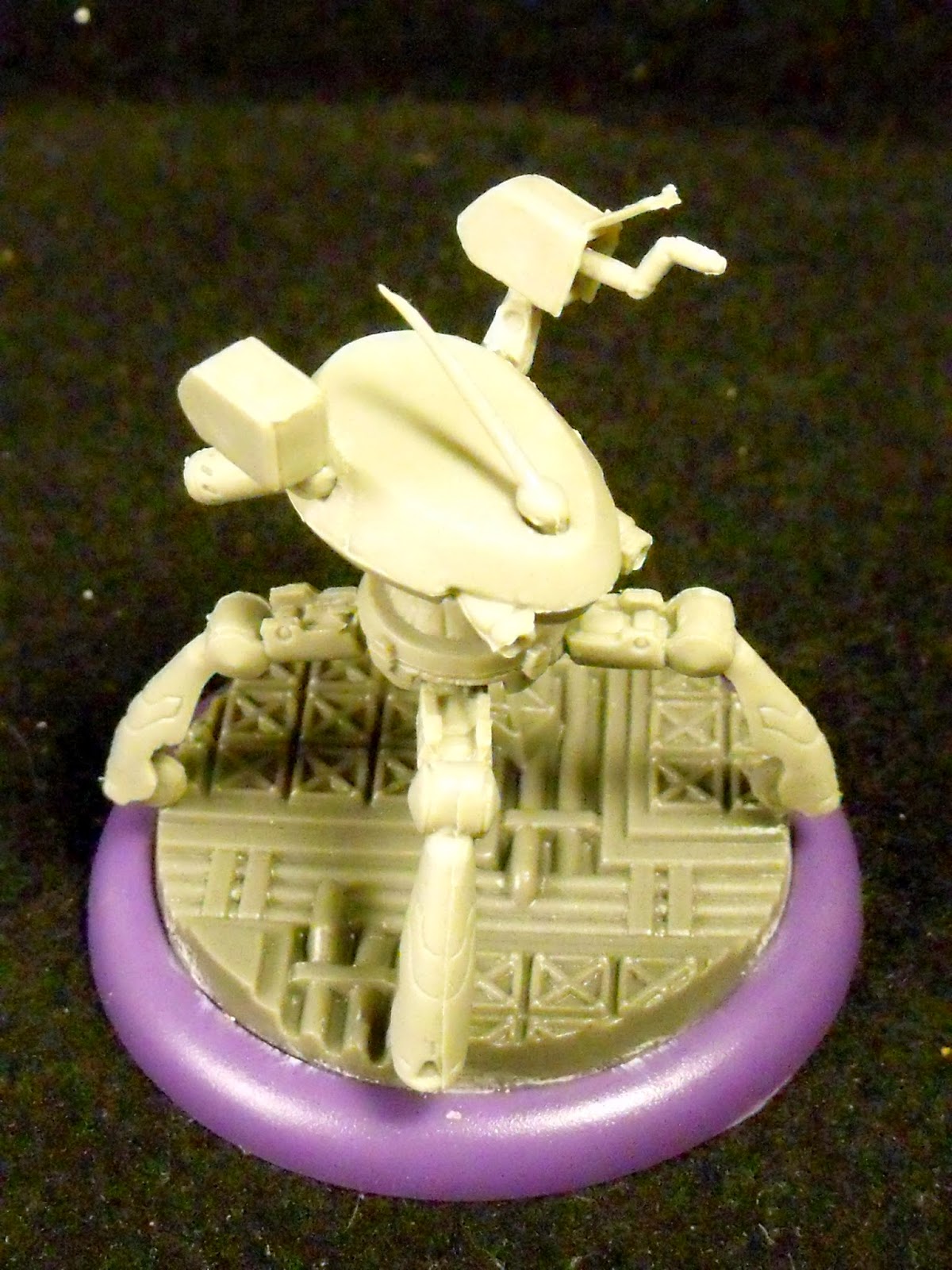 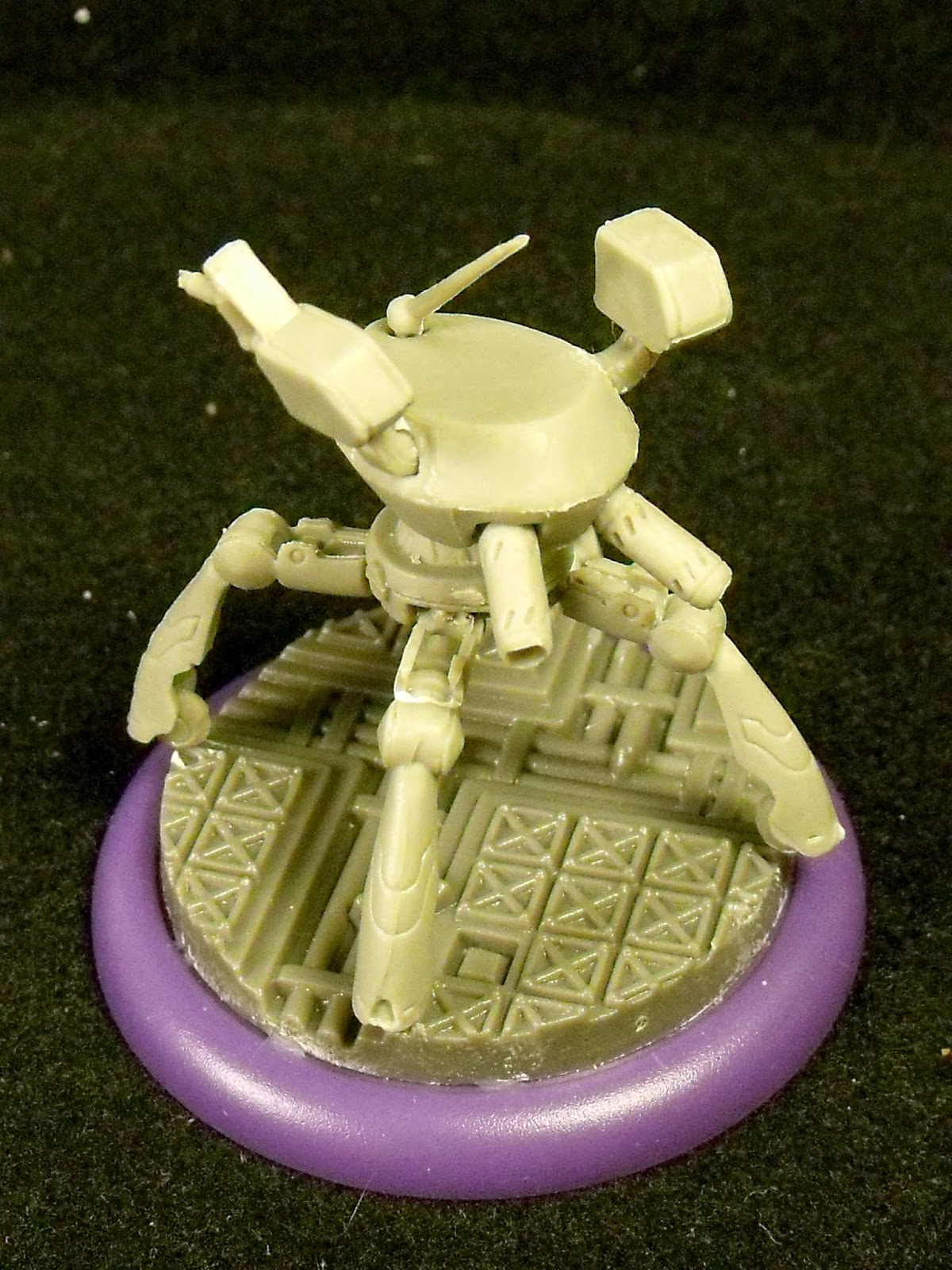 I really like the PACE bot, but I wish the legs weren't spread out so far. It was a bitch mounting them to the base. I ended up having to bend them at the joints and then glue them to the base inserts. I really want to paint them up like Tachikoma from Ghost in the Shell, even though they aren't build the same. 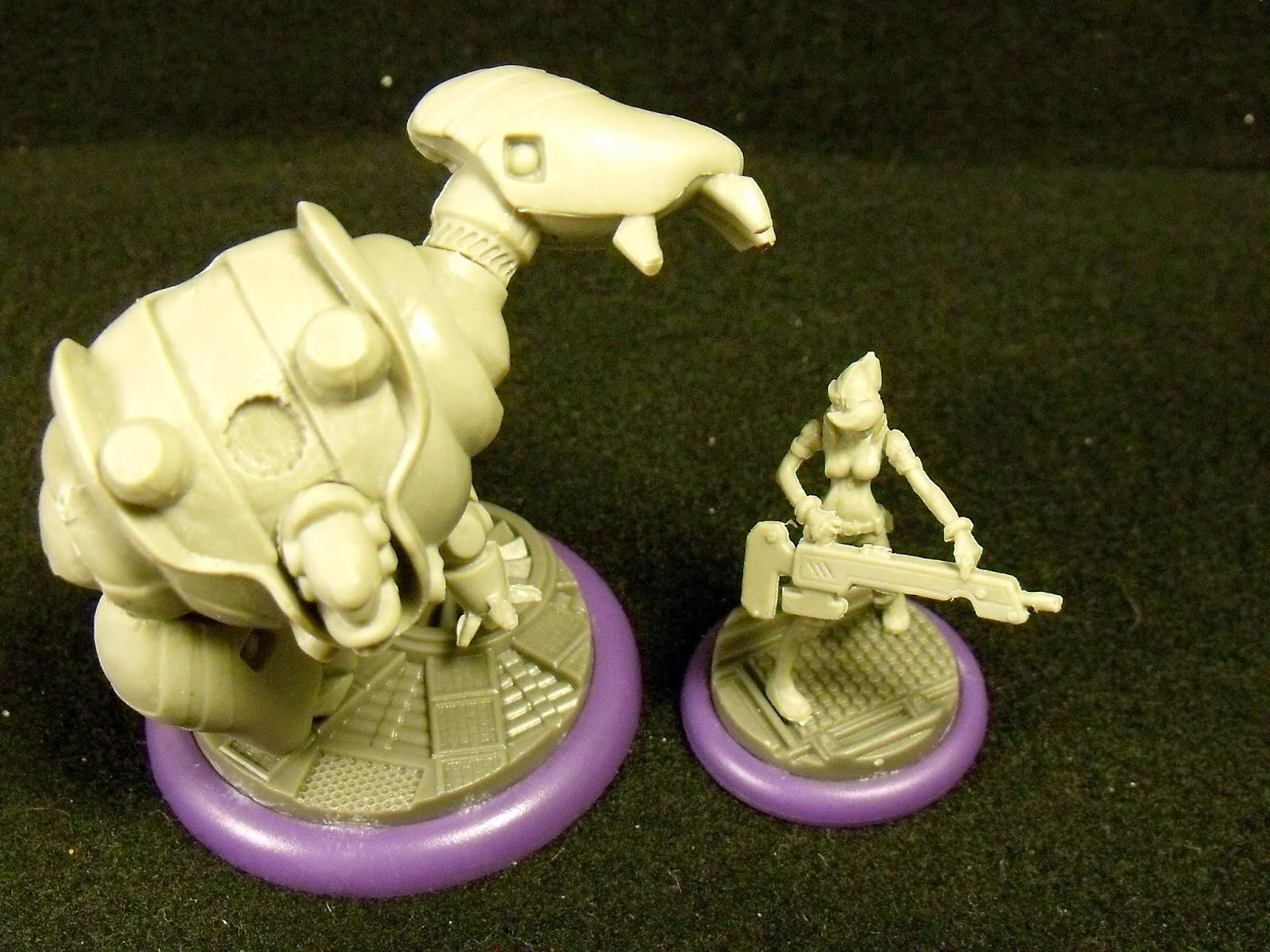 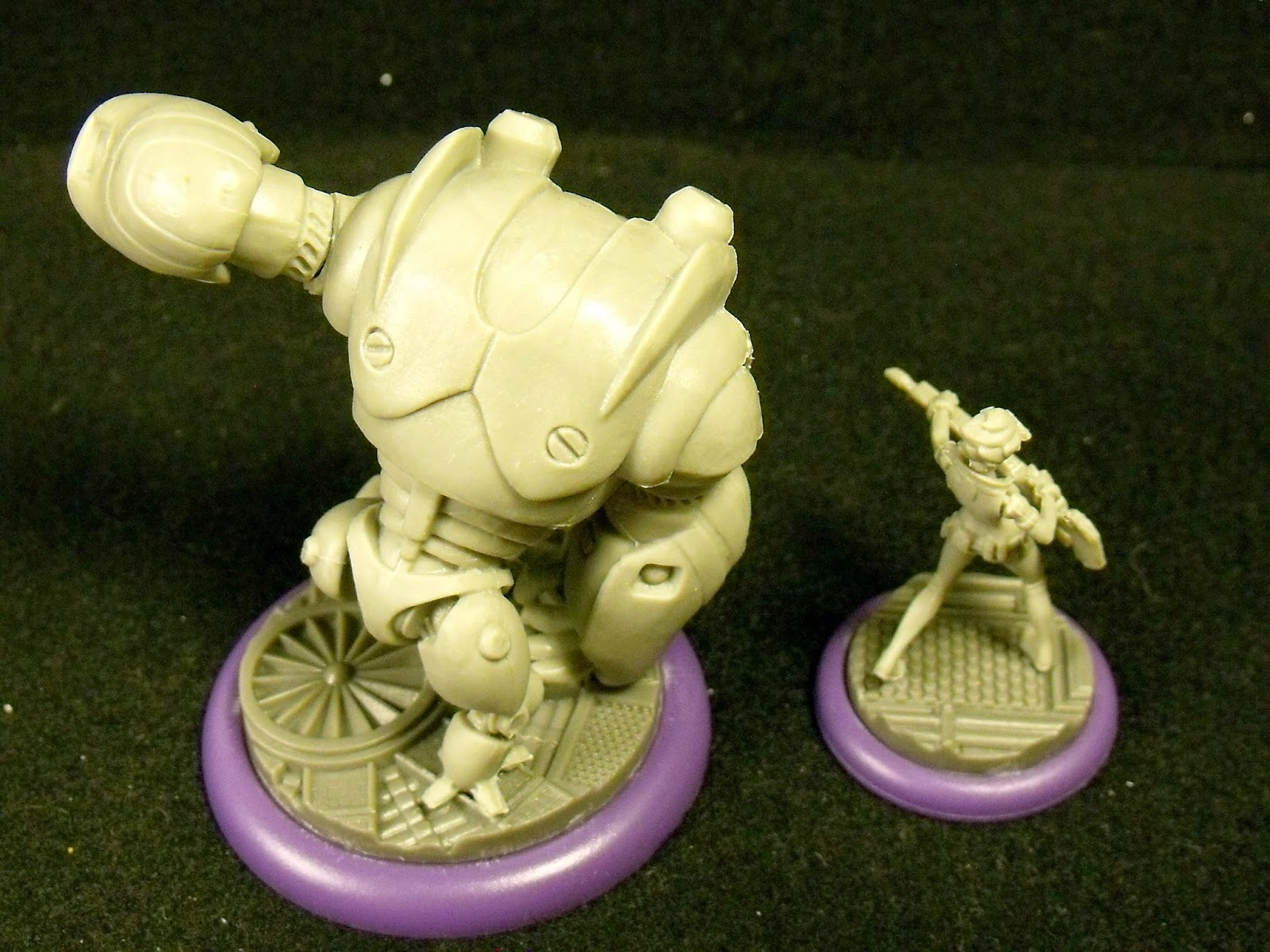 Betty & Lug are actually 2 separate units, but they are linked together and it affects their gameplay. Like pretty much all of the Cerci models, I'm a big fan of Lug. I just think he's so cool looking and hope that I can do him justice if I ever get around to painting him. Betty suffers from some of the same issues as Rinn, she seems small to me. But she's still pretty cool, my model needs a bit more clean up, especially on the gun she's carrying. 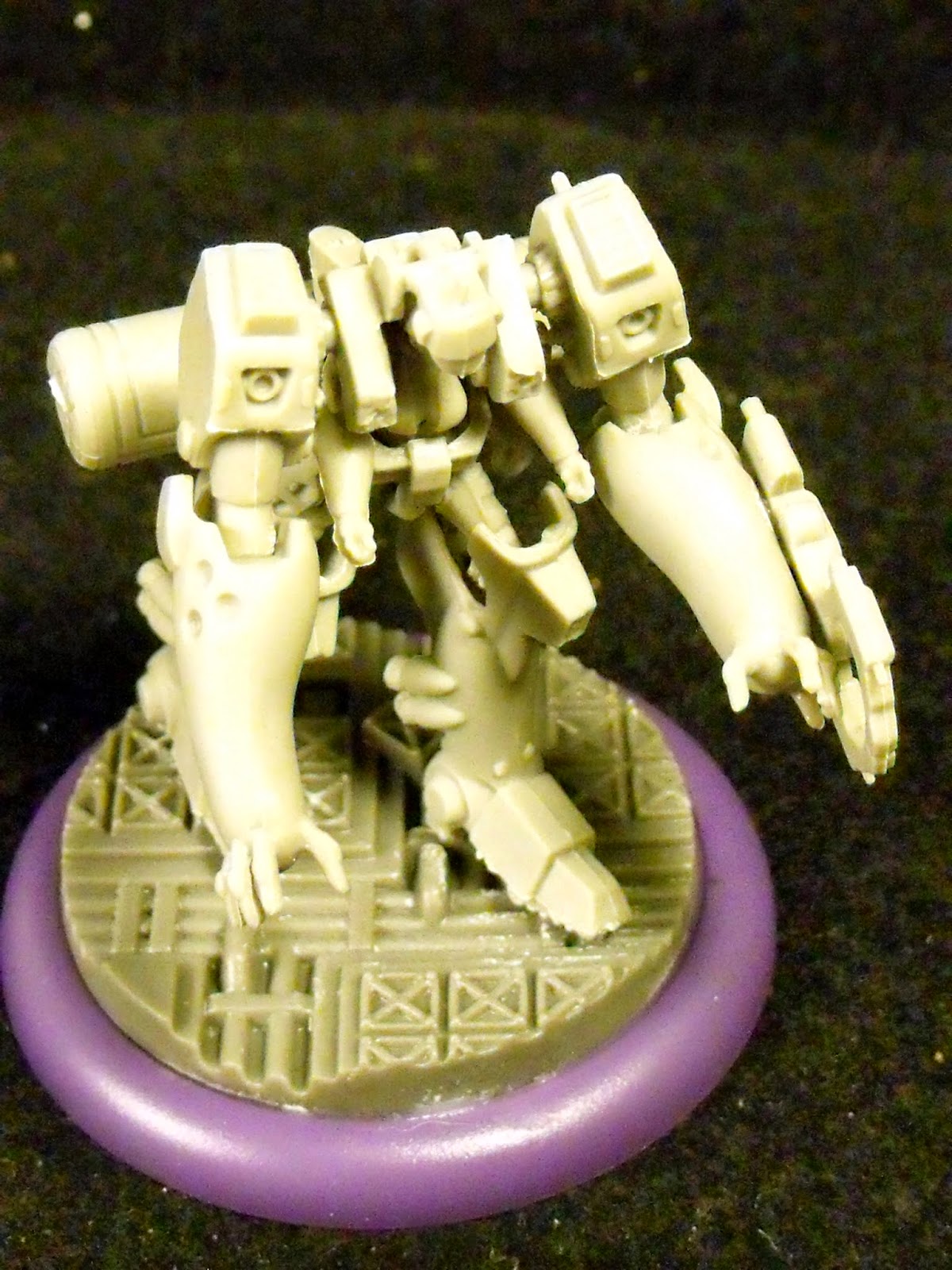 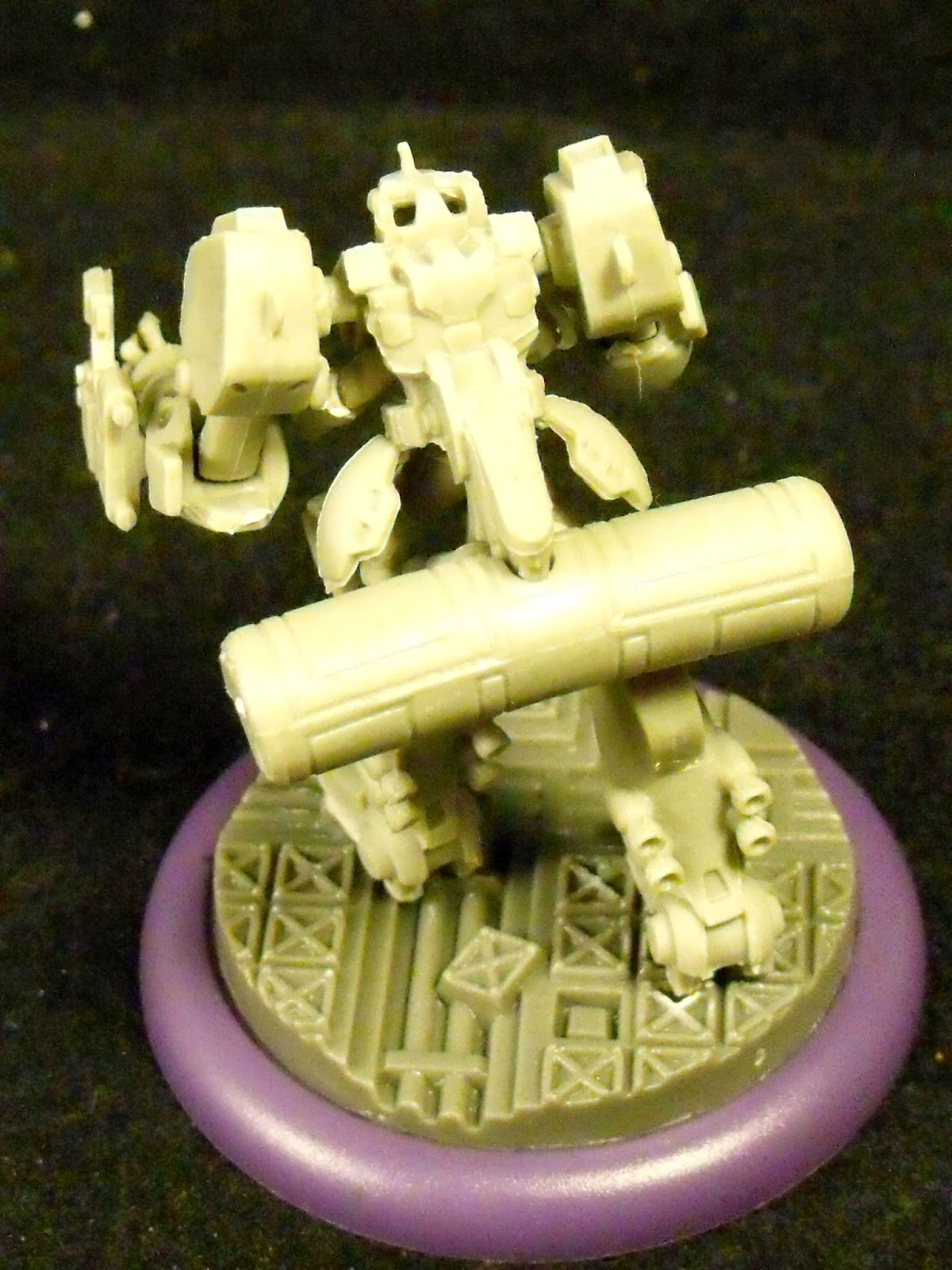 The second model from the Cerci Battle Box and possibly the most tedious model to assemble in the entire Cerci Kickstarter is the Royal Wrecker. She has a lot of parts and they ave to be put together in a particular order, or you'll be trying to force things passed other things. I do like the model though and think it turned out great. The only complaint I have is that the feet of the mech weren't keyed very differently and I couldn't tell which was the left and the right. I think I have mine on wrong... but the glue was set before I could fit it. Ah well. 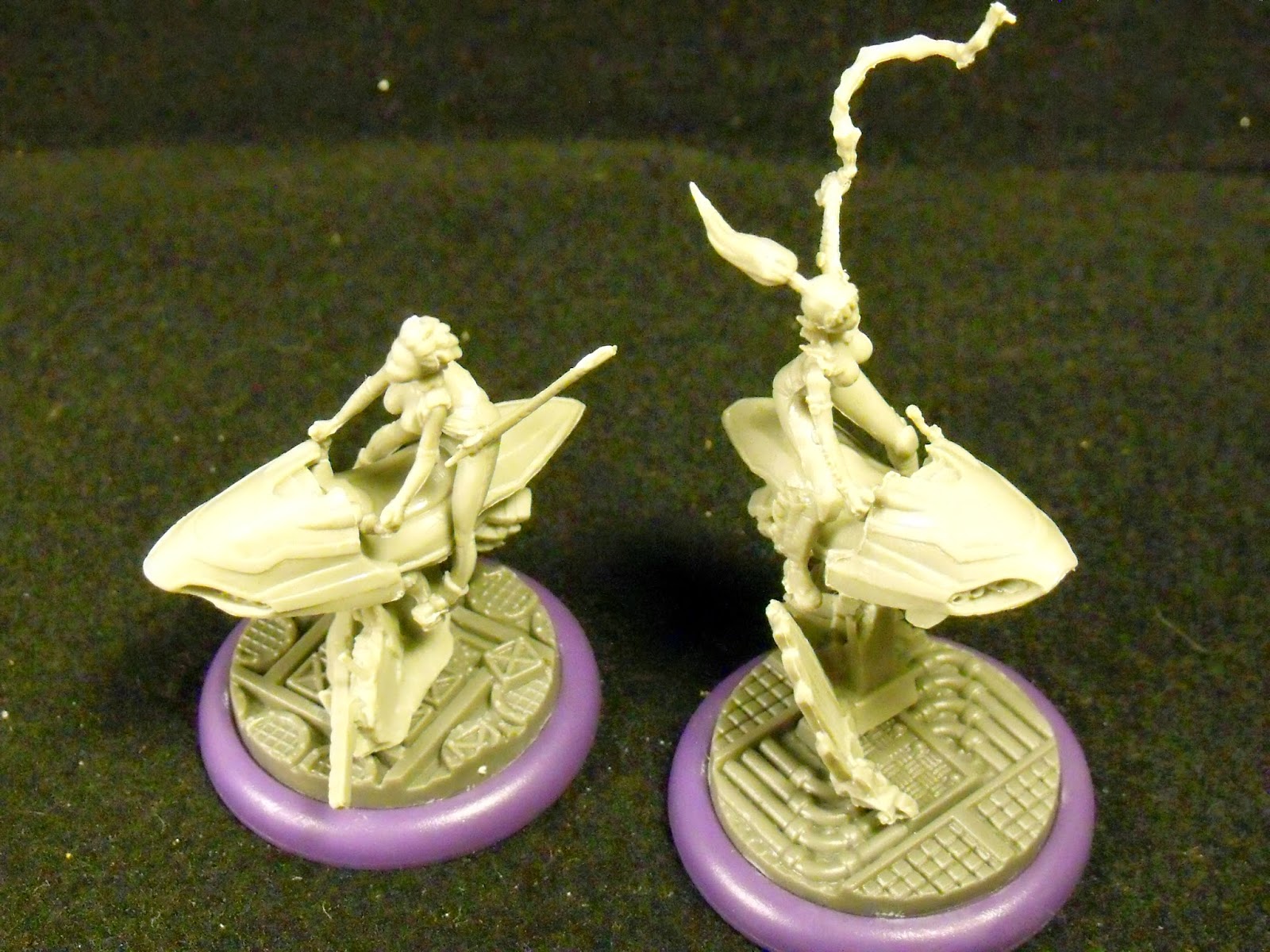 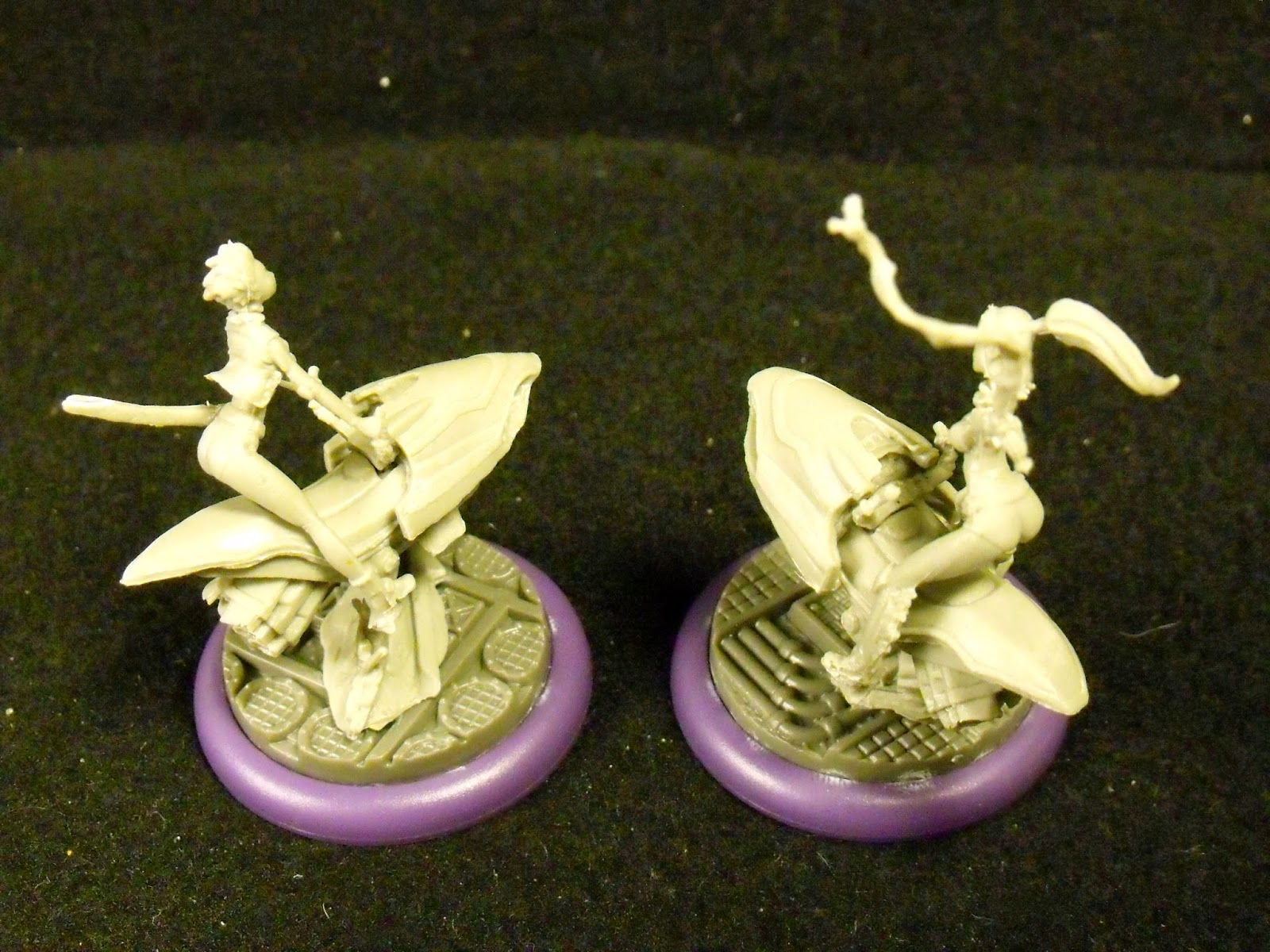 The Hell's Belles are the street racers of the Cerci faction. They come packaged with 3 models and the kickstarter provided backers with 6 models total... the only problem? I am missing 2 of the biker's bodies, so I can't finish putting them all together until I get a hold of Soda Pop about getting replacements. All in all I am really happy with them and can't wait to paint them up and make custom decals using my water transfer paper. I like how they mount on the elevated bases, but I am thinking that I might take some of my Games Workshop flying bases and mount them on the clear post from them. 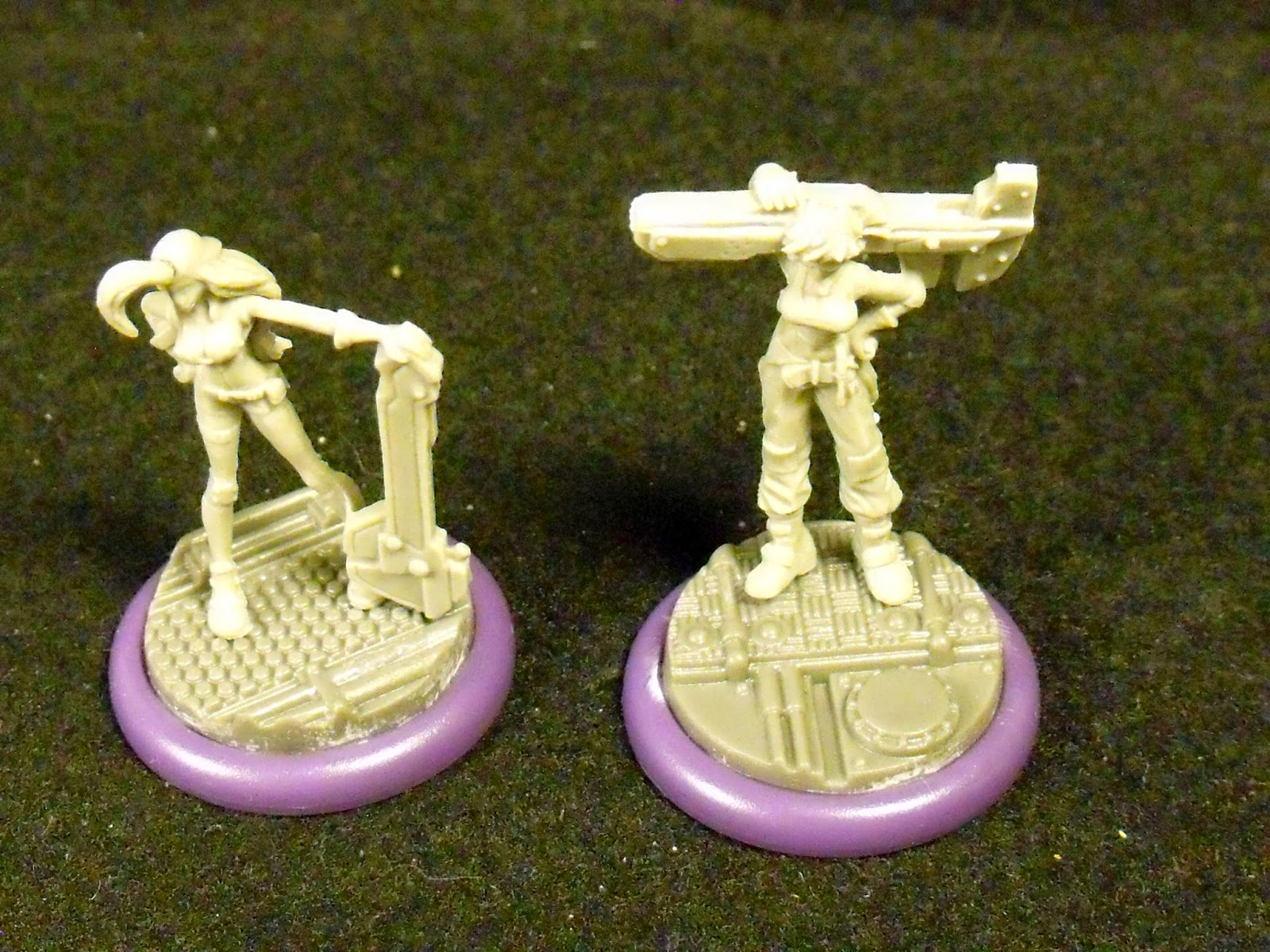 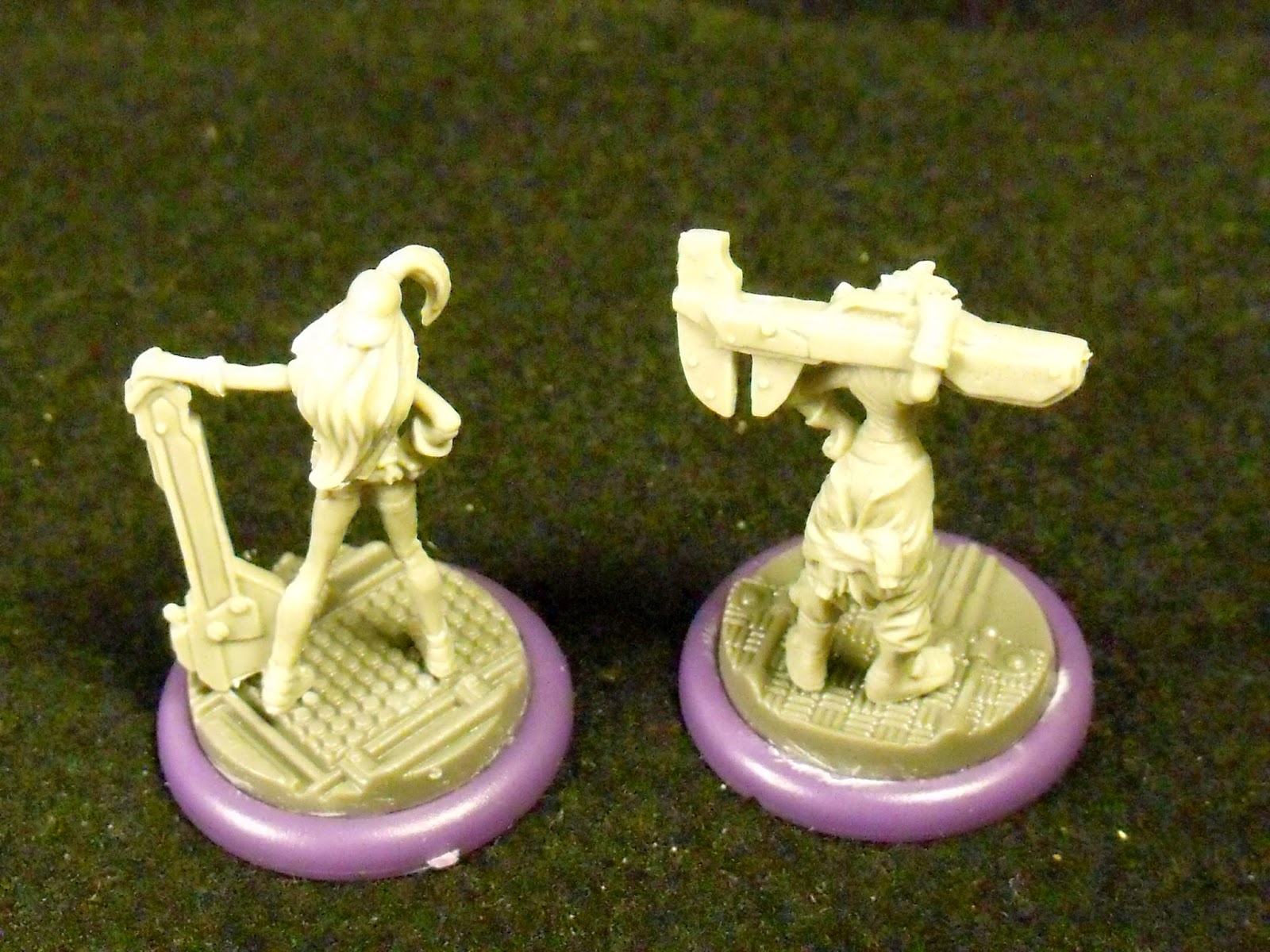 Another squad for Cerci are the Pit Crew. These ladies are ready to keep your gear in tip top shape! They are also part of the Battle Box. I like the one with the big wrench on her shoulder (reminds me of Winry from Fullmetal Alchemist). I'm not really a big fan of the one with the backwards ball cap. The piece of hair coming out of the front is kinda dumb looking, if you ask me, and it was kinda of fiddly getting it in place. But that's what they make tweezers for.

And there you have it! The Cerci Speed Circuit models from the the Kickstarter. I'm kinda sad that they didn't send along the Battle Box contents in the actual packaging. But I can understand the difficulty of trying to keep track of who pledged for the full contents and who didn't. I might buy the Battle Box at retail and sell off the extra tokens and Marie-Claude... just so I can get the box.

Tomorrow, we take a look at the models for Black Diamond!
Posted by Scott Ferguson at 2:27 AM
Email ThisBlogThis!Share to TwitterShare to FacebookShare to Pinterest
Newer Post Older Post Home