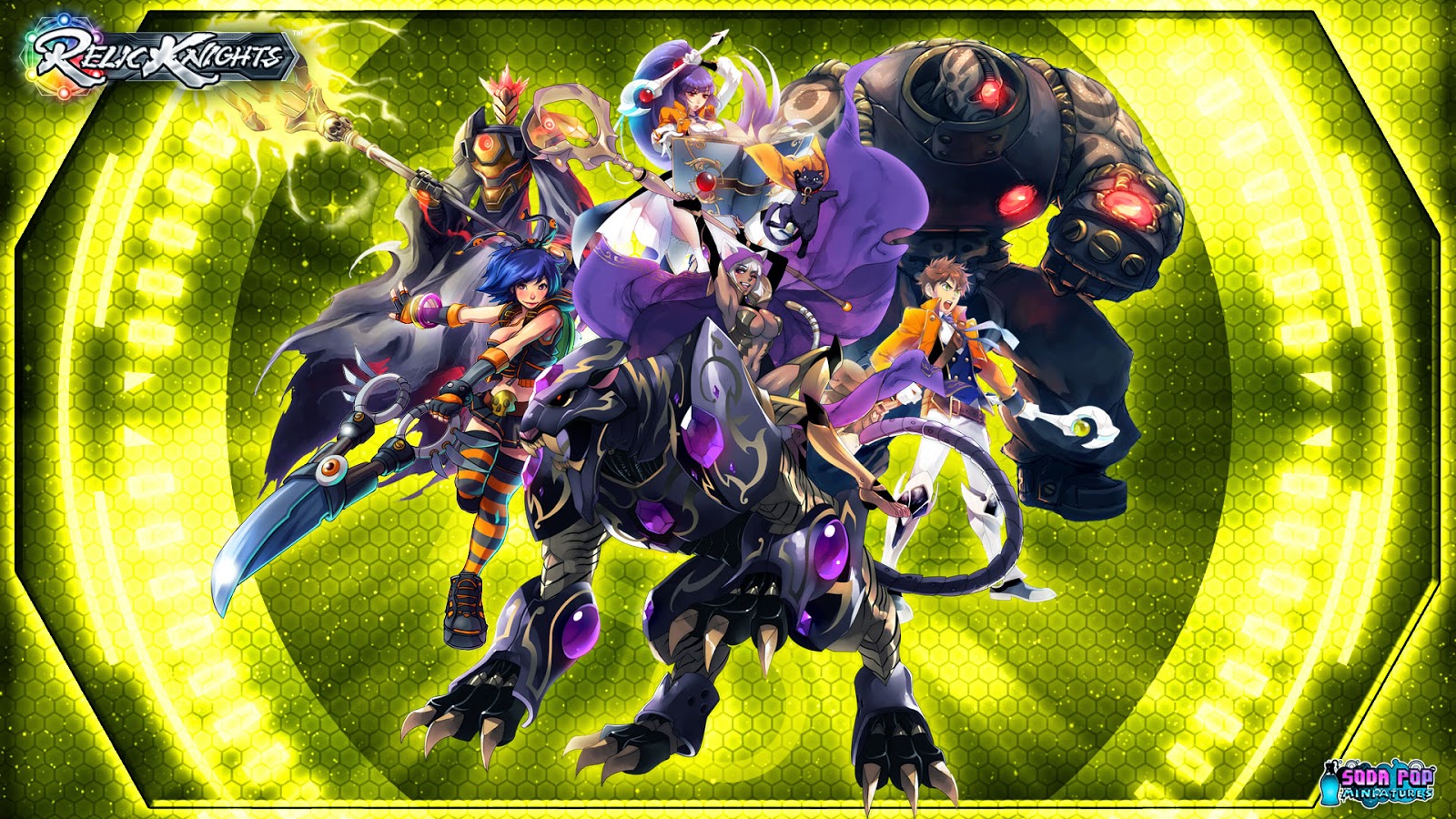 Doctrine represent the Wizards, Socerers, Witches and arcane in the world of Relic Knights. Kisa's panther shaped Relic was one of the main reasons I went in for Doctrine. But I also was a fan of Hasami and Fiametta. These wizards and student mages are all pretty nice and I'm fairly pleased with how they turned out. There are a few issues though, but we'll get into that. 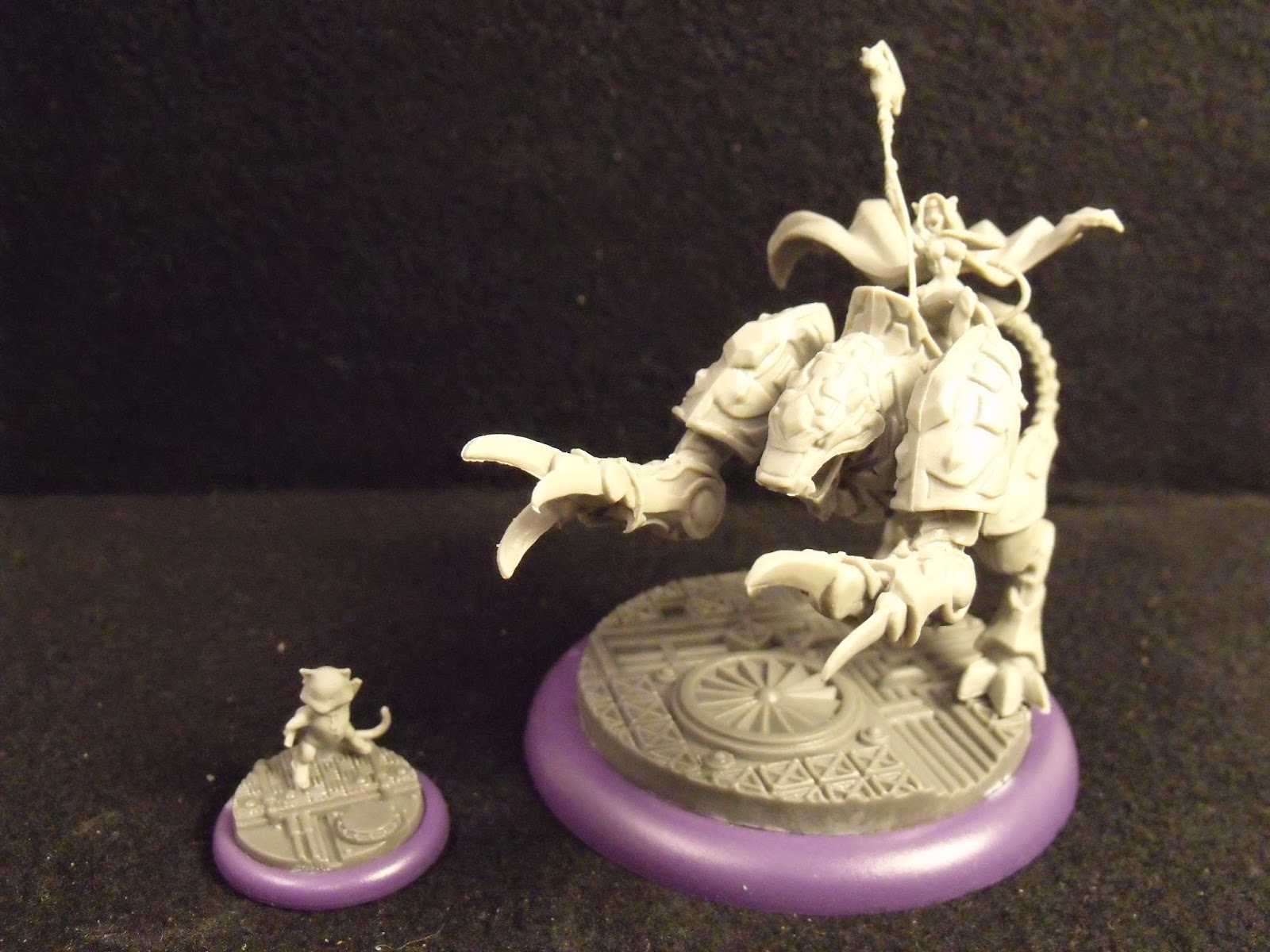 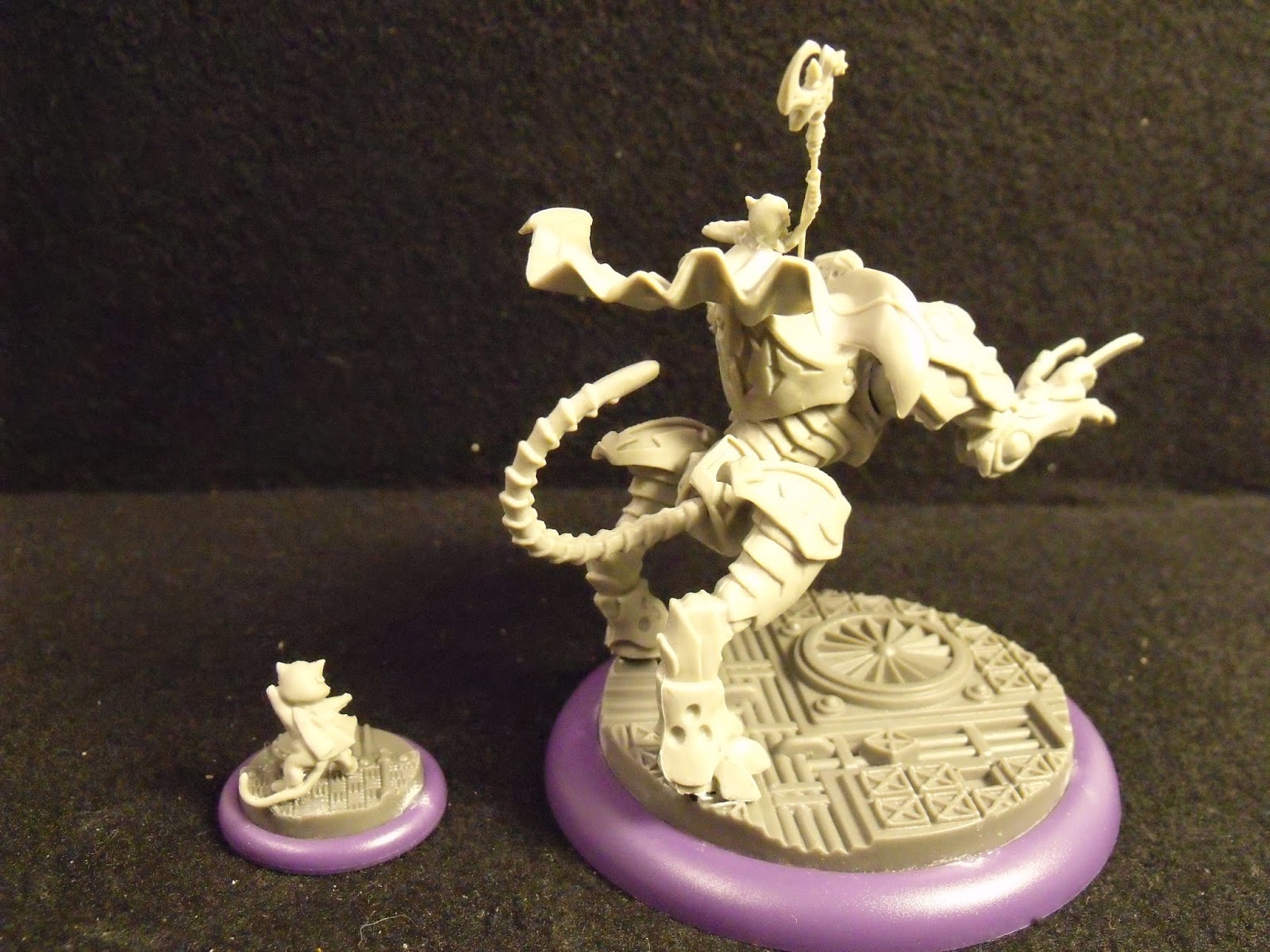 Kisa is the reason I went with Doctrine, no lie. I have the metal Kisa and Scratch from Soda Pop's store, though she's without the Relic. The Relic of hers is sweet and the gems on it should make for some fun in the paint department. The model went together really easy and mine had very minimal clean up required. The only problem I have with it, is mounting Kisa on the saddle. she doesn't seem to want to fit on there properly... I might need to rework her tail to fit nicer. For now, she's just sitting on there unglued. I like the new model for Scratch, it's super cute and looks less like an Egyptian cat caricature. 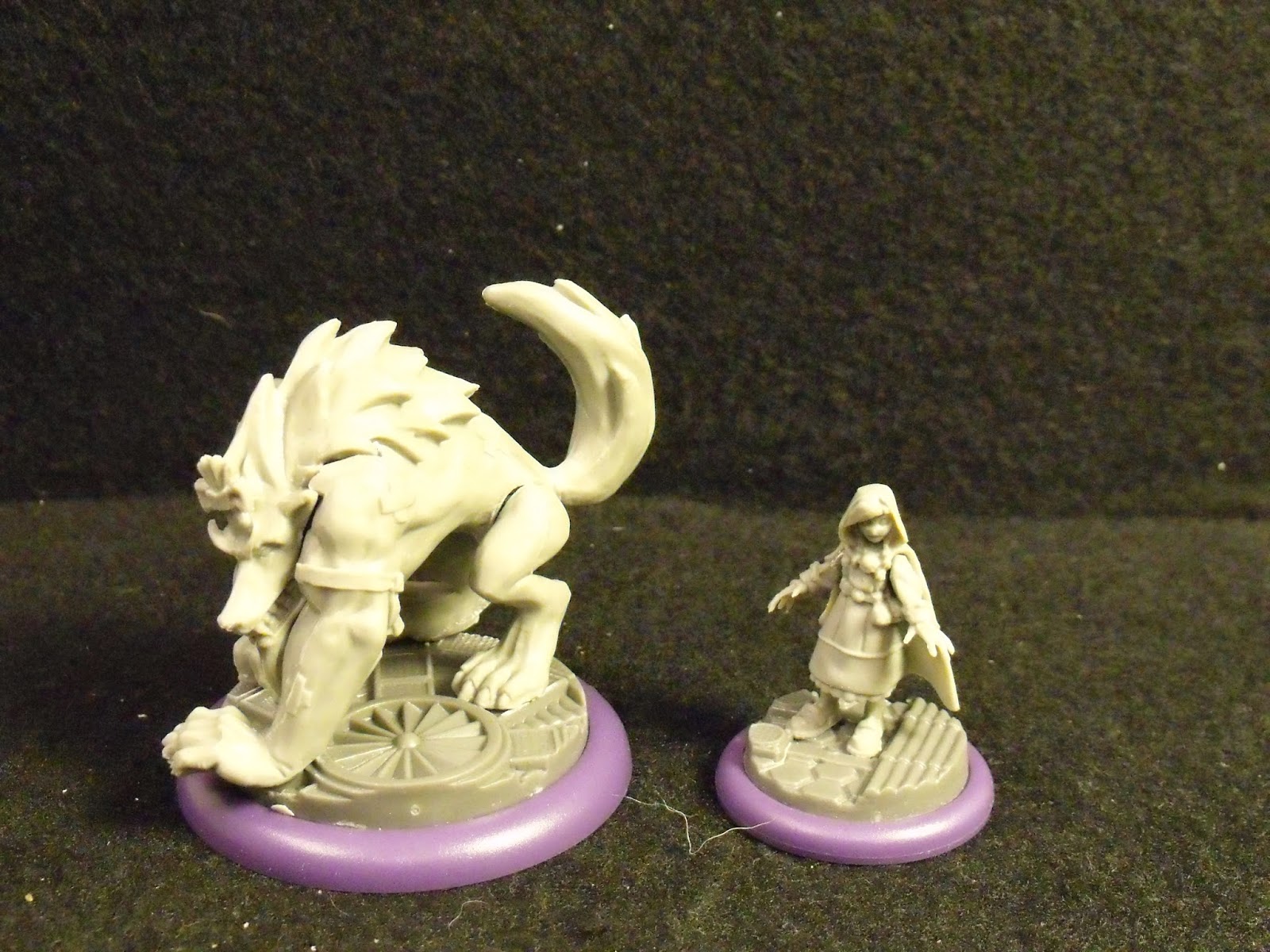 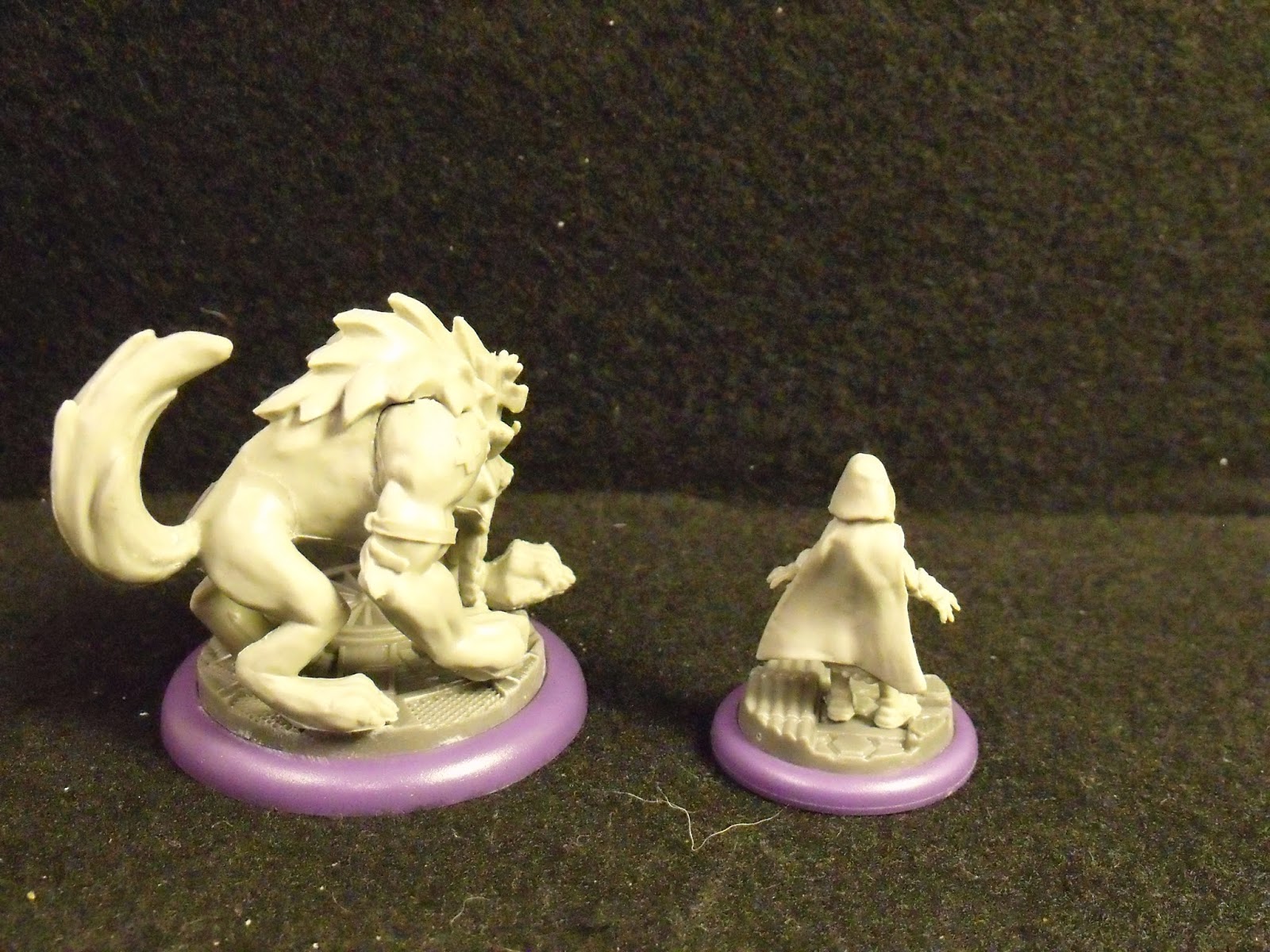 The Questing Knight included in the Battle Box, unlike most of the other Knights, Delphyne's Cypher Ekhis is no small little magical creature.. he's bigger than she is! She has a definite Little Red Riding Hood vibe going and and being an innocent little girl, she holds no weapons, staves wands. Ekhis is an imposing beast of a Cypher too. Personally, I'm not really all that interested in Delphyne, but that might change if I get a chance to see how she plays. I'm sure a lot of my opinions on many of the characters will change once we get some games in. 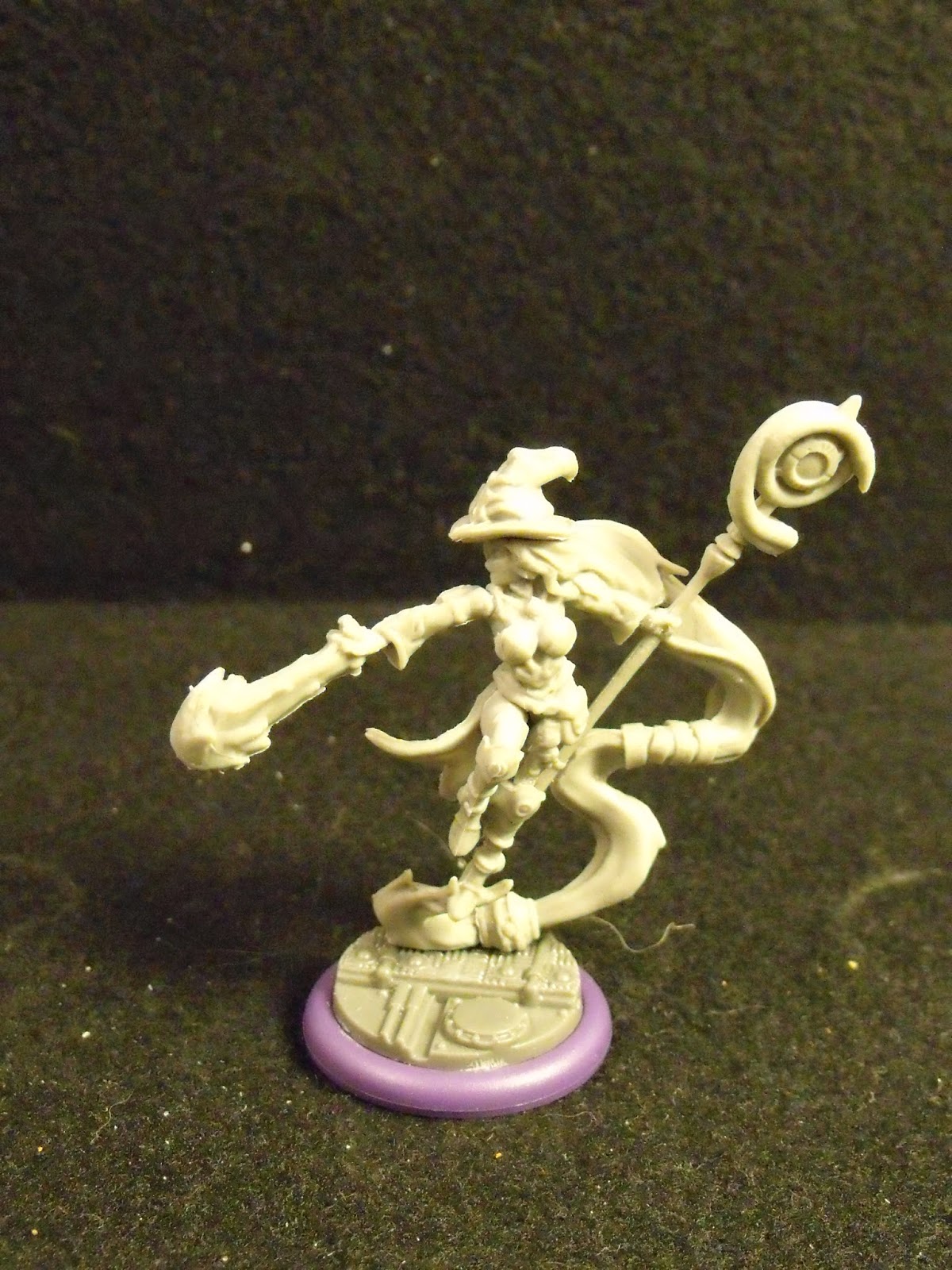 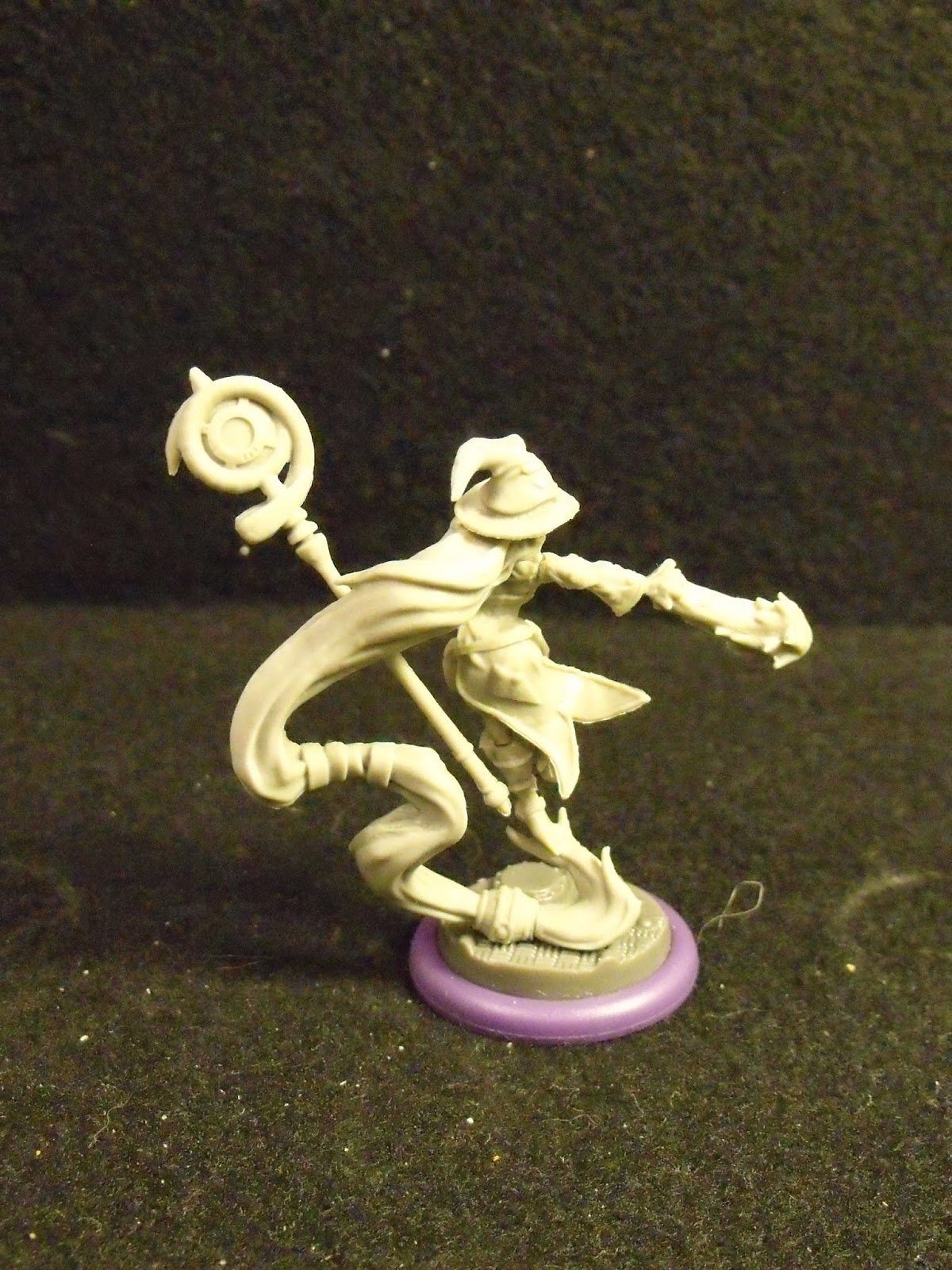 I really like Fiametta's new model, compared to the old one on the Soda Pop store. She seems more dynamic and the fire she's shooting should be fun to paint as fire. She was really simple to assemble and I didn't have any fiddly parts or a lot of mold sections to clean off. Comparing here to some of the other human characters in the faction, she seems a bit bigger (another knock against what seems like a lack of adhereing to a set scale). 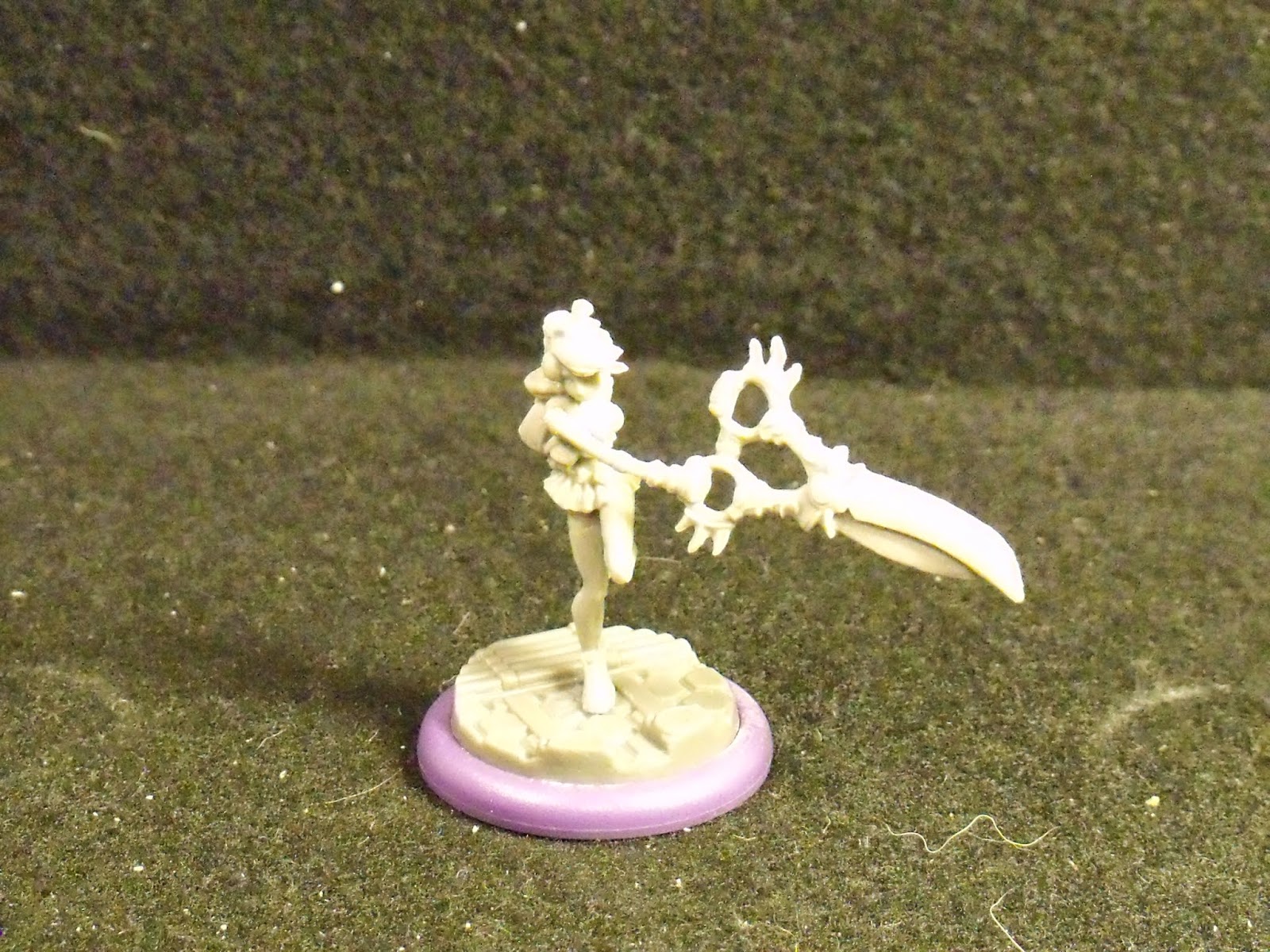 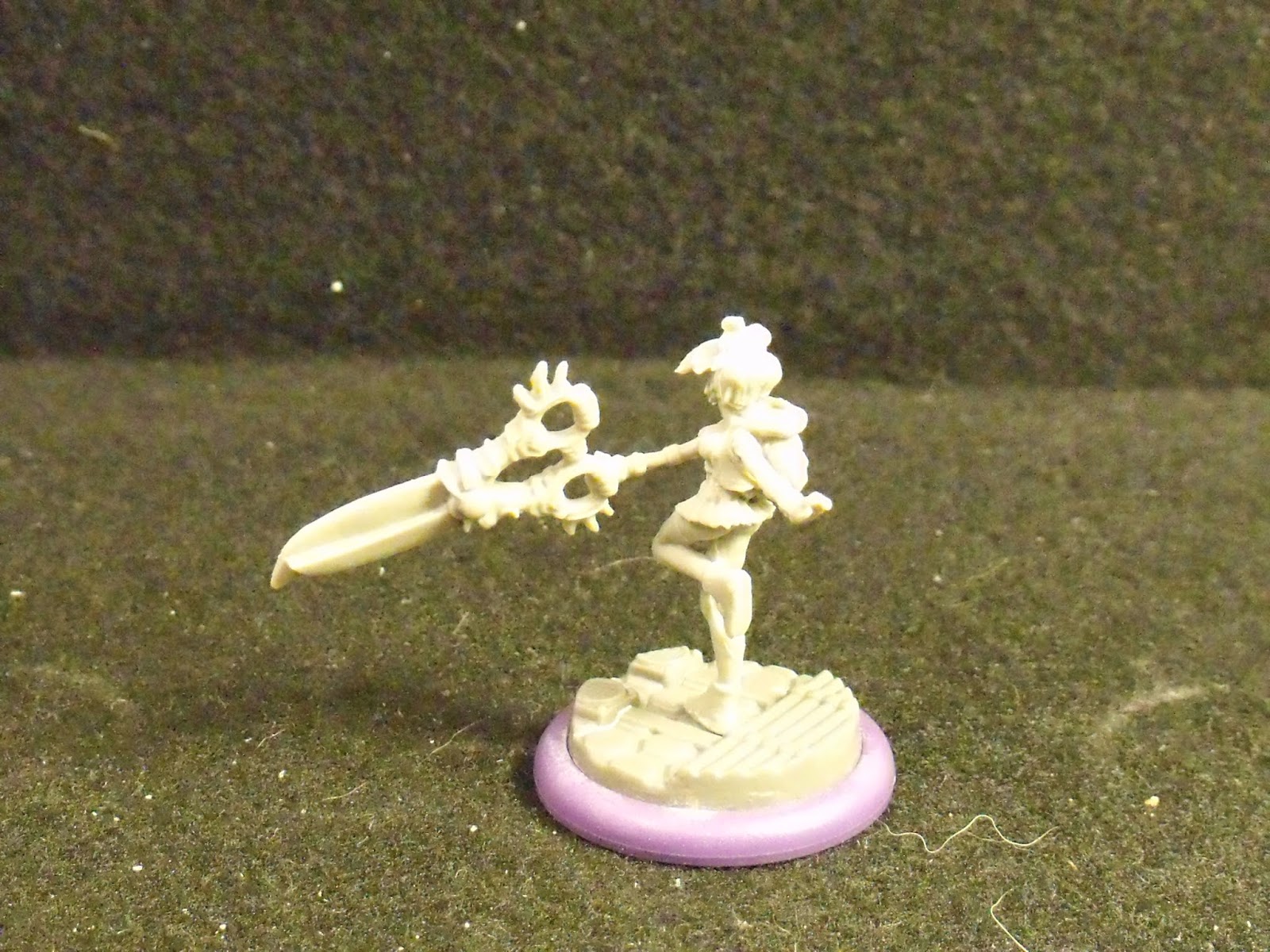 Hasami is cool, I mean how can you go wrong with a set of giant scissors for a weapon. She's another one of the reasons I went with Doctrine, I just love the absurdity of her. And her scissors even have a eyeball on them ala' Soul Edge. her arms glued on rather easily, thanks to the keyway slots, but I did notice that she has a bit of moldlines to deal with before painting and she seems on the small side, especially compared to Fiametta. 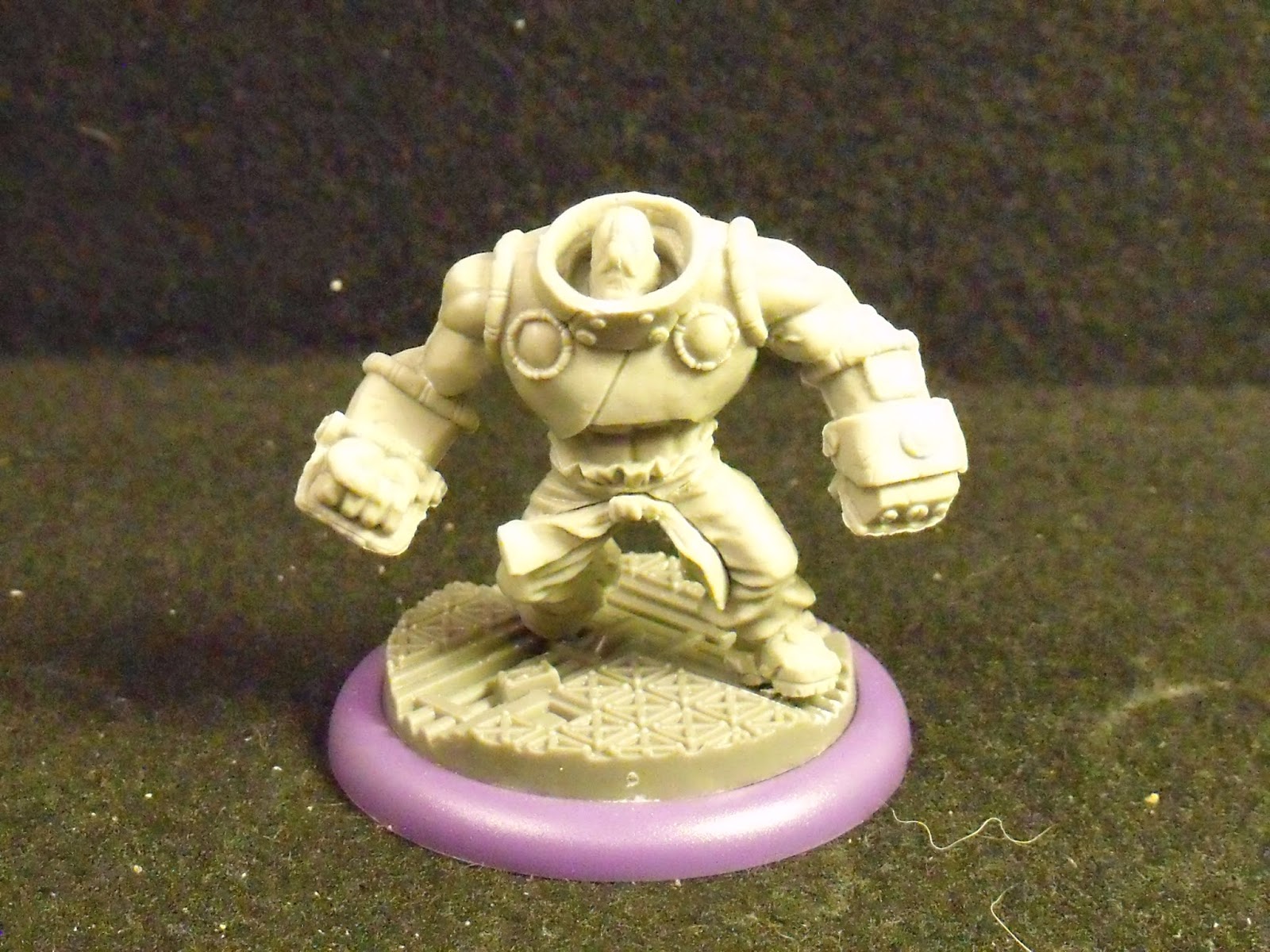 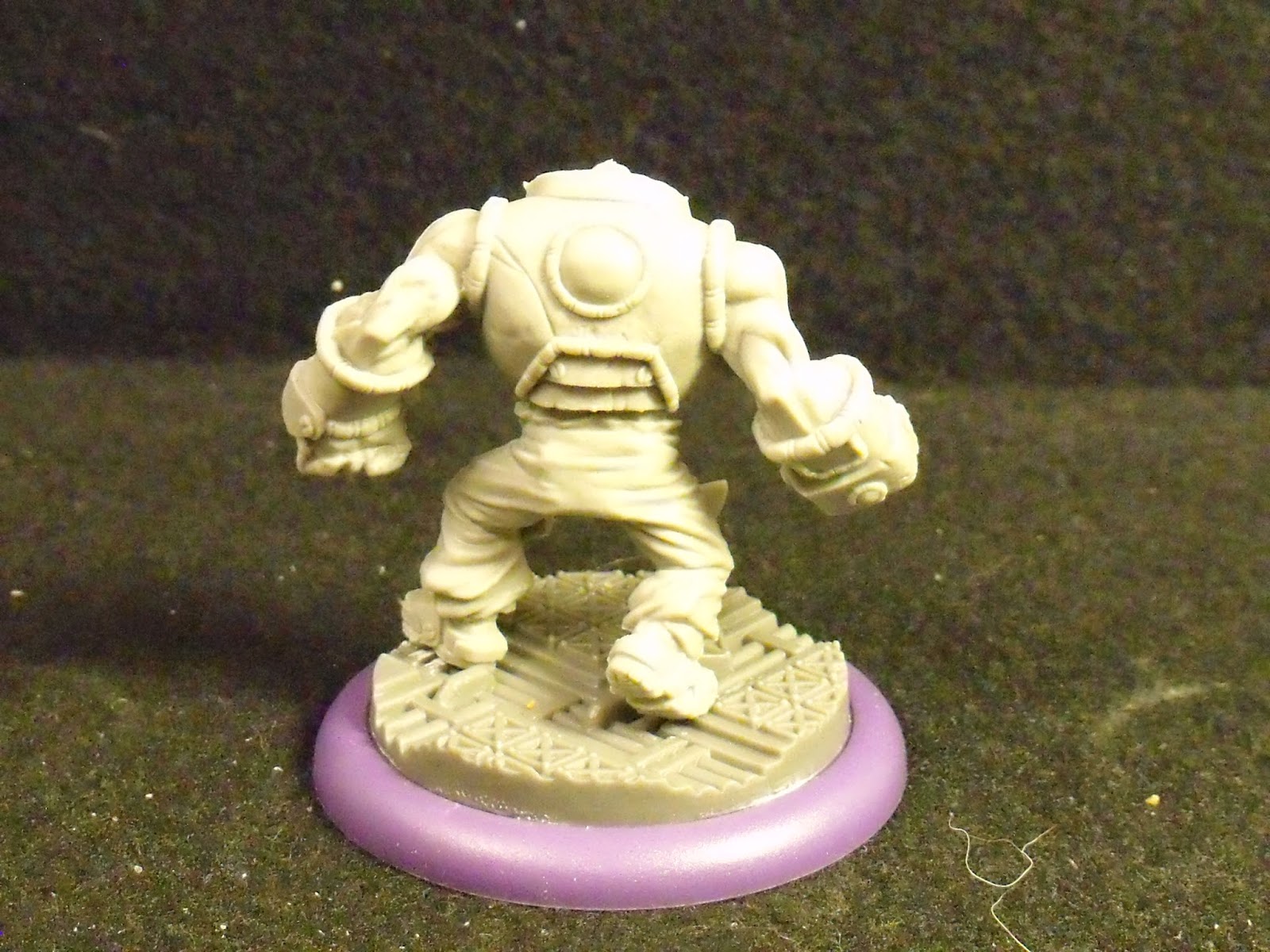 What's a school of magic without arcane enchanted guardians? Not a very good one, that's what. The Librarians are the golems of the Doctrine, and they are impressive. Originally, when I was assembling them I started with the one in the Battle Box and I had the belt bow left over in my parts pile. I thought it went to Ekhis and spent a good amount of time trying to figure out where it when on him, until I said to hell with it and started working on the Librarian... 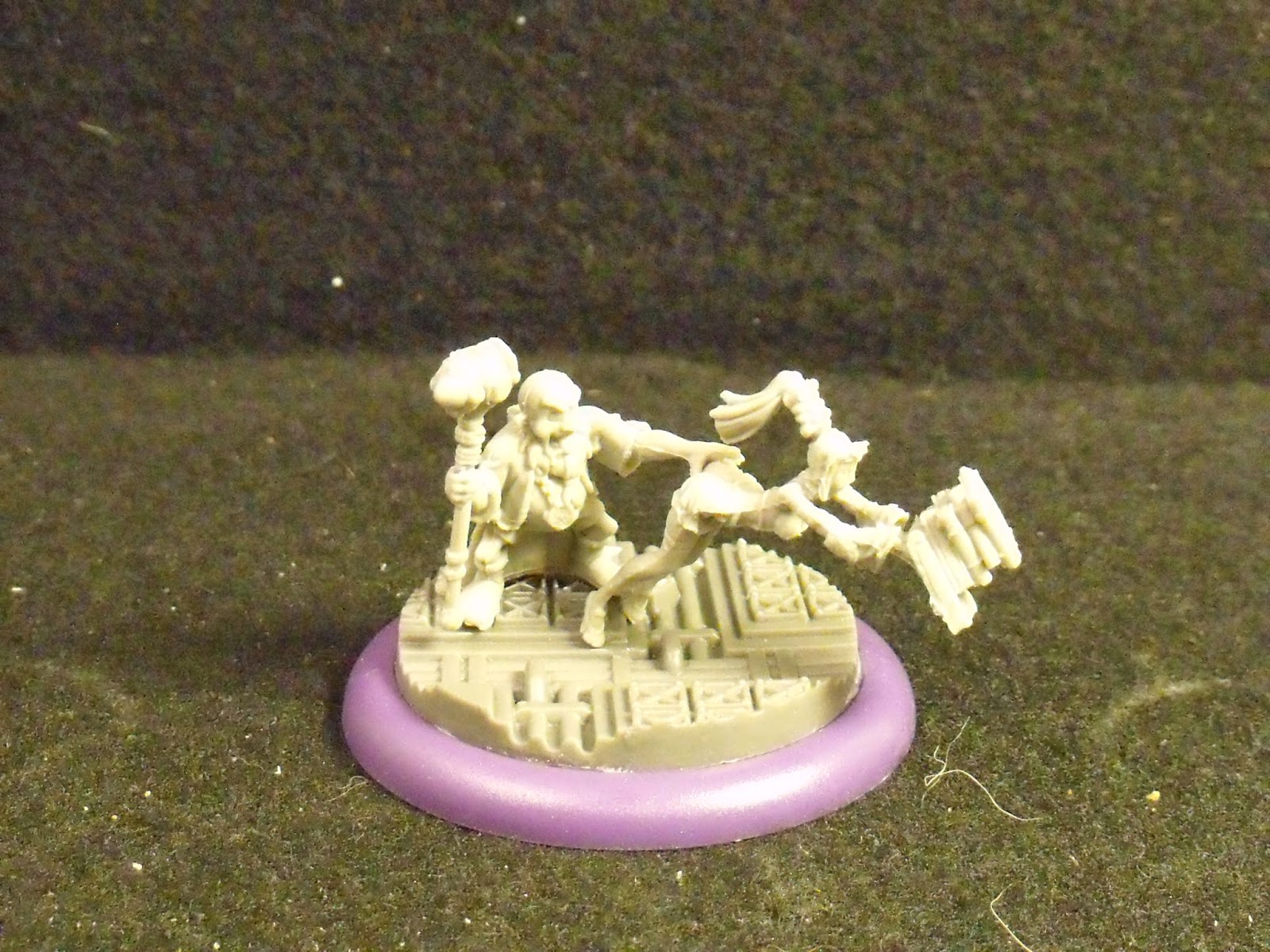 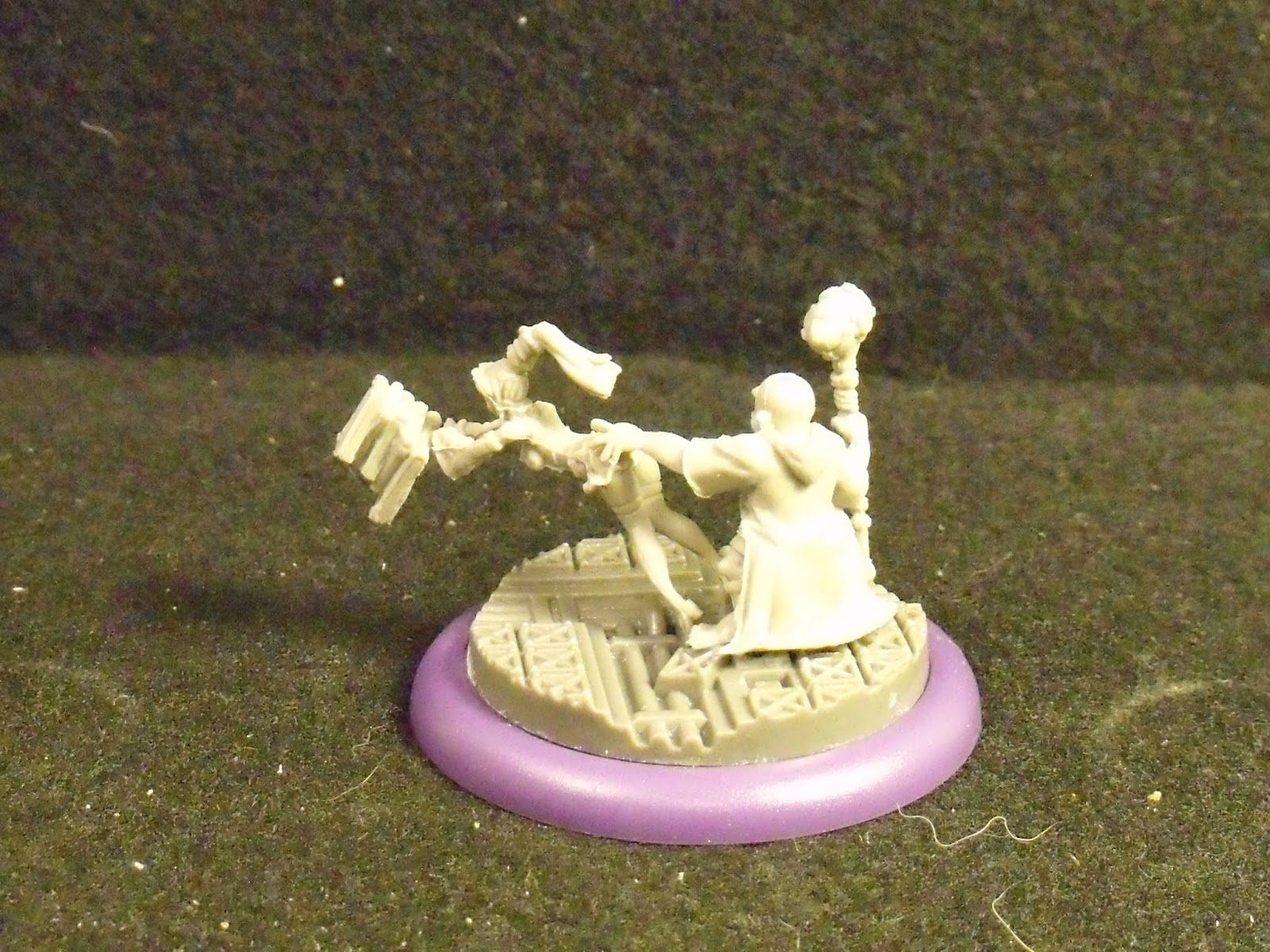 Man this figure got a lot of flack during the Kickstarter. There were a lot of people complaining about the "cheesecake poses" of some of the Relic Knights, but there seemed to be even louder voices about this one. Togan is your stereotypical dirty old man and Cecilia is the unfortunate apprentice assigned to work with him. Basically, here you have a old man grabbing the ass of a young girl. Soda Pop doesn't shy away from things like this, especially if you take into account Tentacle Bento. Some folks protested about it, others defended it and I sat back and chuckled about it all. Anyway, when it came time to assemble these two I did try out a couple different placements of them both. But in the end I decided to hell with it and glue Cecilia's ass right to that old man's graspy palm. hah. 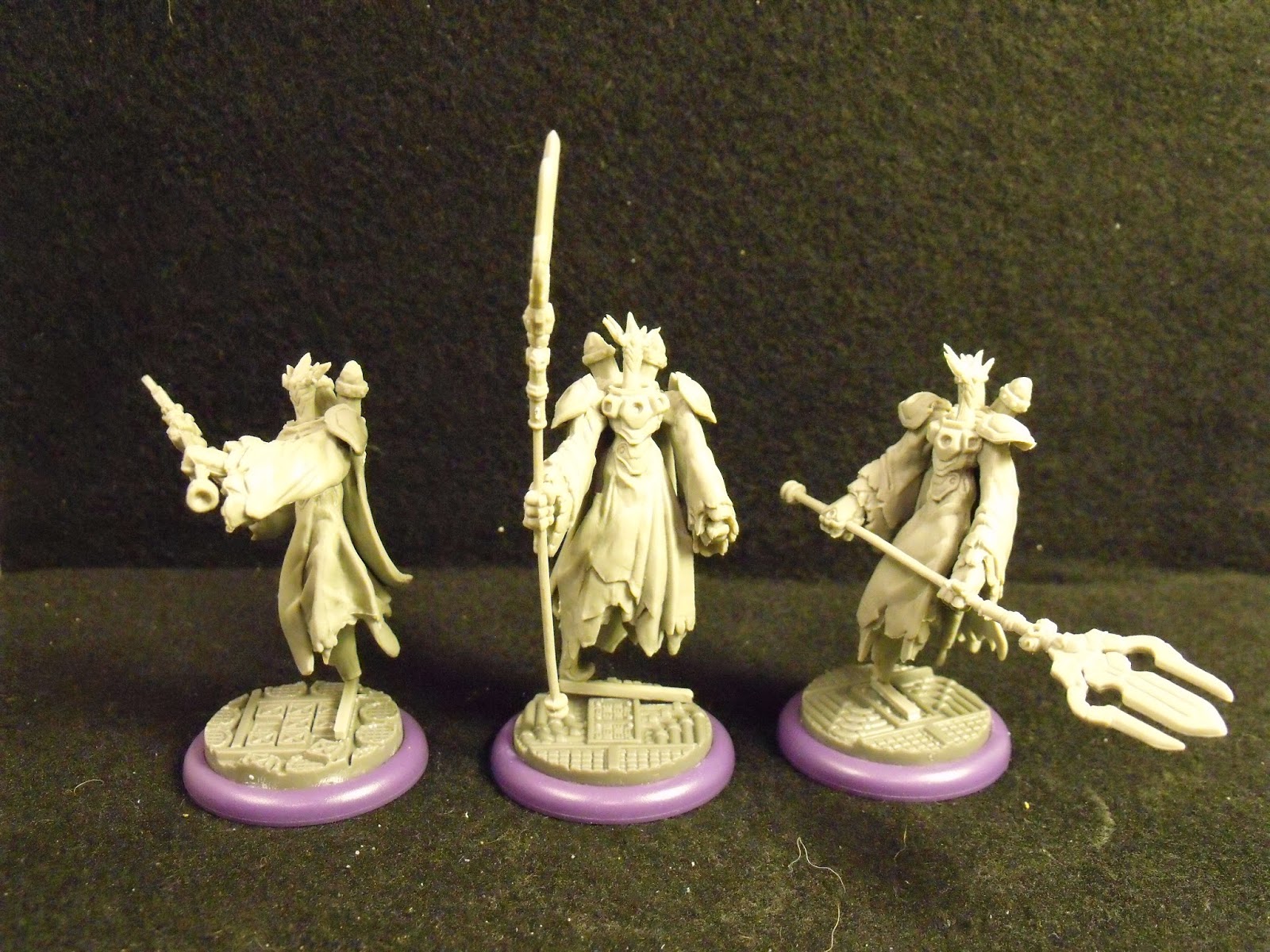 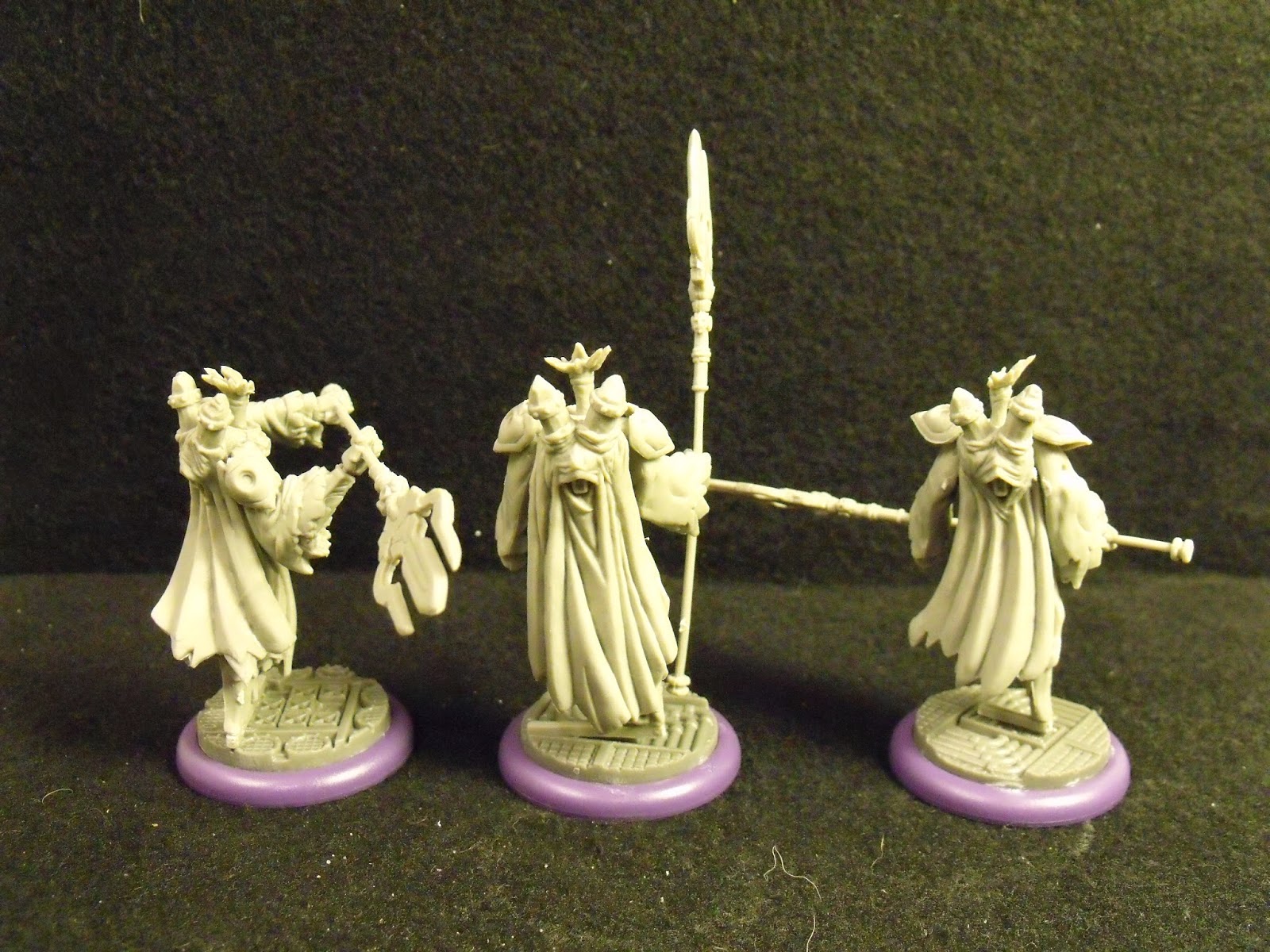 More arcane guardians? Yes, please! These guys are cool and actually turned out better than I was expecting, based on their concept artwork. The look spooky and imposing, with that Christmas Carol Ghost of Christmas Yet To Come vibe. They were fairly simple to assemble and the moldlines on mine were really easy to clean off. But, I do have a couple of issues with them though. For one, their heads are kinda too cylindrical and lack the shape and crown shown in the artwork, which is disappointing. Their bodies are nice and so are their tridents. But I don't like how they seem to be the only models in the Kickstarter (that I know of) with slotta base "feet". It throws off the clean look compared to the other other floating or flying characters. And since the slotta "feet" have to glue on as an extra part, it means that it's a possible break point. And with the base inserts on the bases it makes them attach even weirder... Like the Hell's Belles, I may just pop them off the intended base and use flying base stands to make them float nicer. 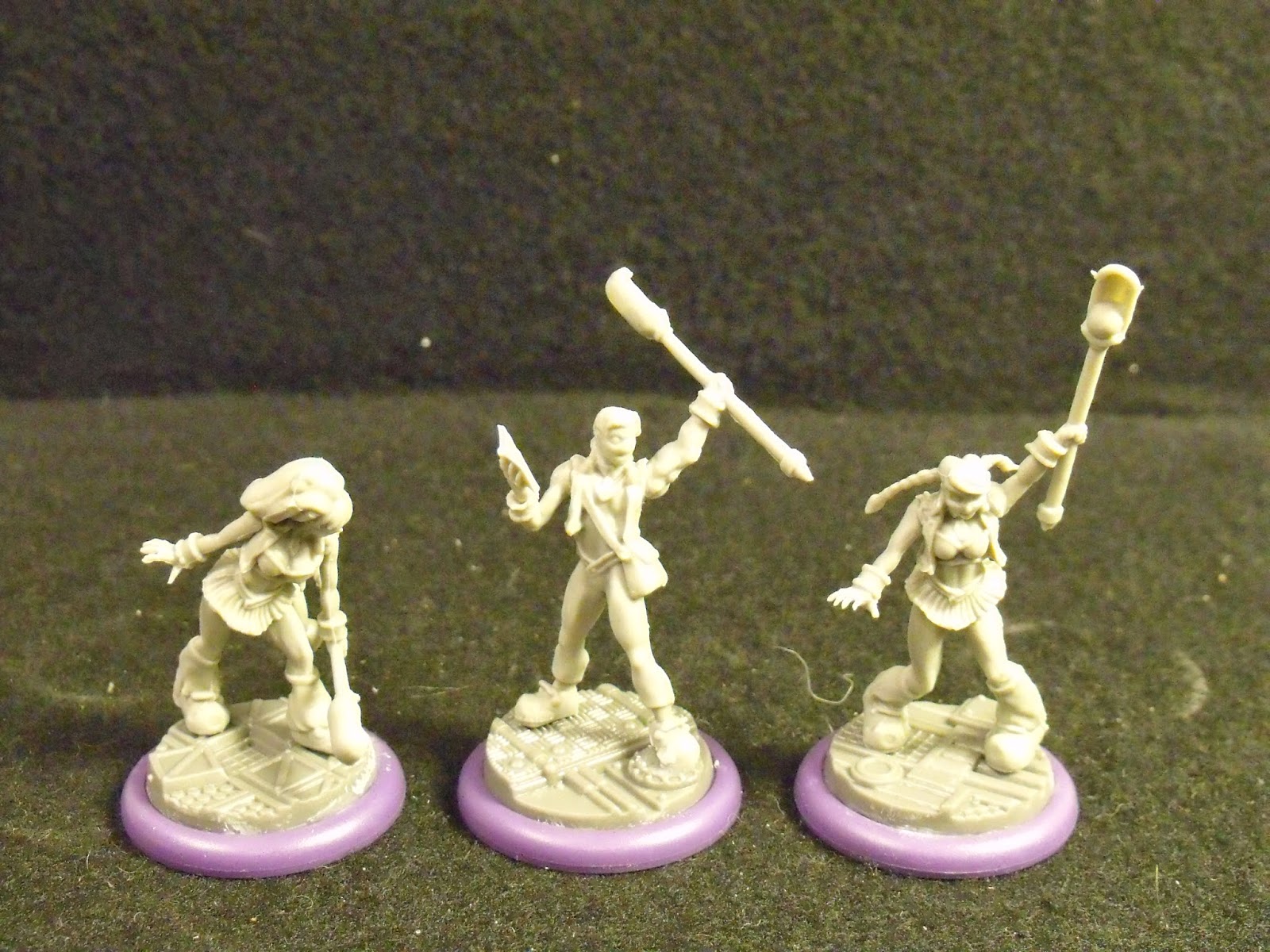 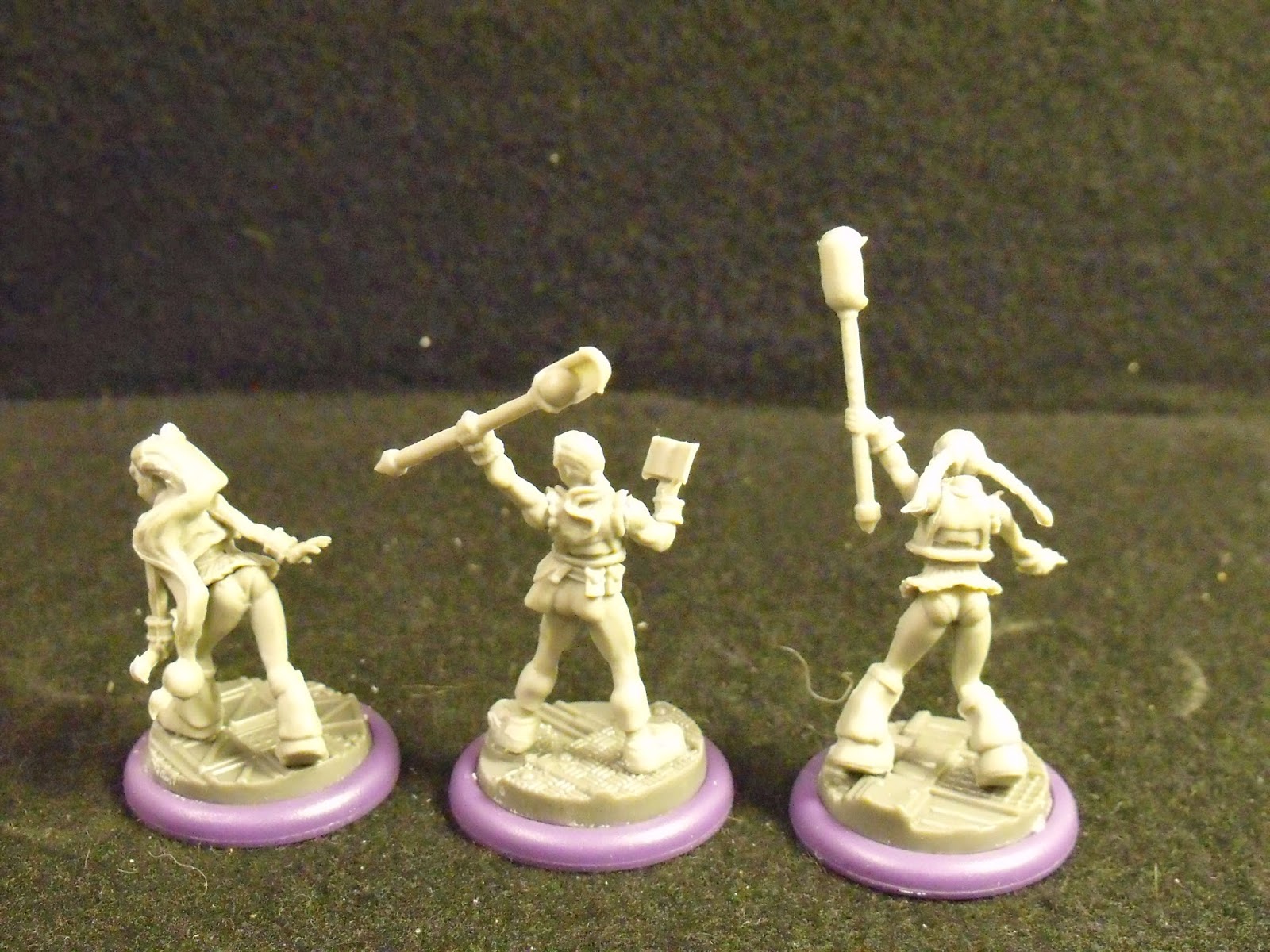 The Novitiates, it seems that Doctrine had a lot of people upset over the faction's design. And these kids were no exception. The biggest issue on the KS's comments was their shoes. Personally I like them, they're fun and the chicks are rocking leg warmers! Then there was the fact that they have mini-mini skirts and their panties are showing. I've seen plenty of anime over the years and these seem like they'd fit right in with the likes of Shuffle!, Koi Koi Seven and Girls Bravo. And since it's a game based on anime tropes... what's the big deal? The only one I have a problem with is the dude, his pants are skin tight, the legs are too shot for his leg length and look like a guy trying to wear girls capri pants. He should have had a better job done on them, cause if they're supposed to be slacks, his boys don't have any breathing room. 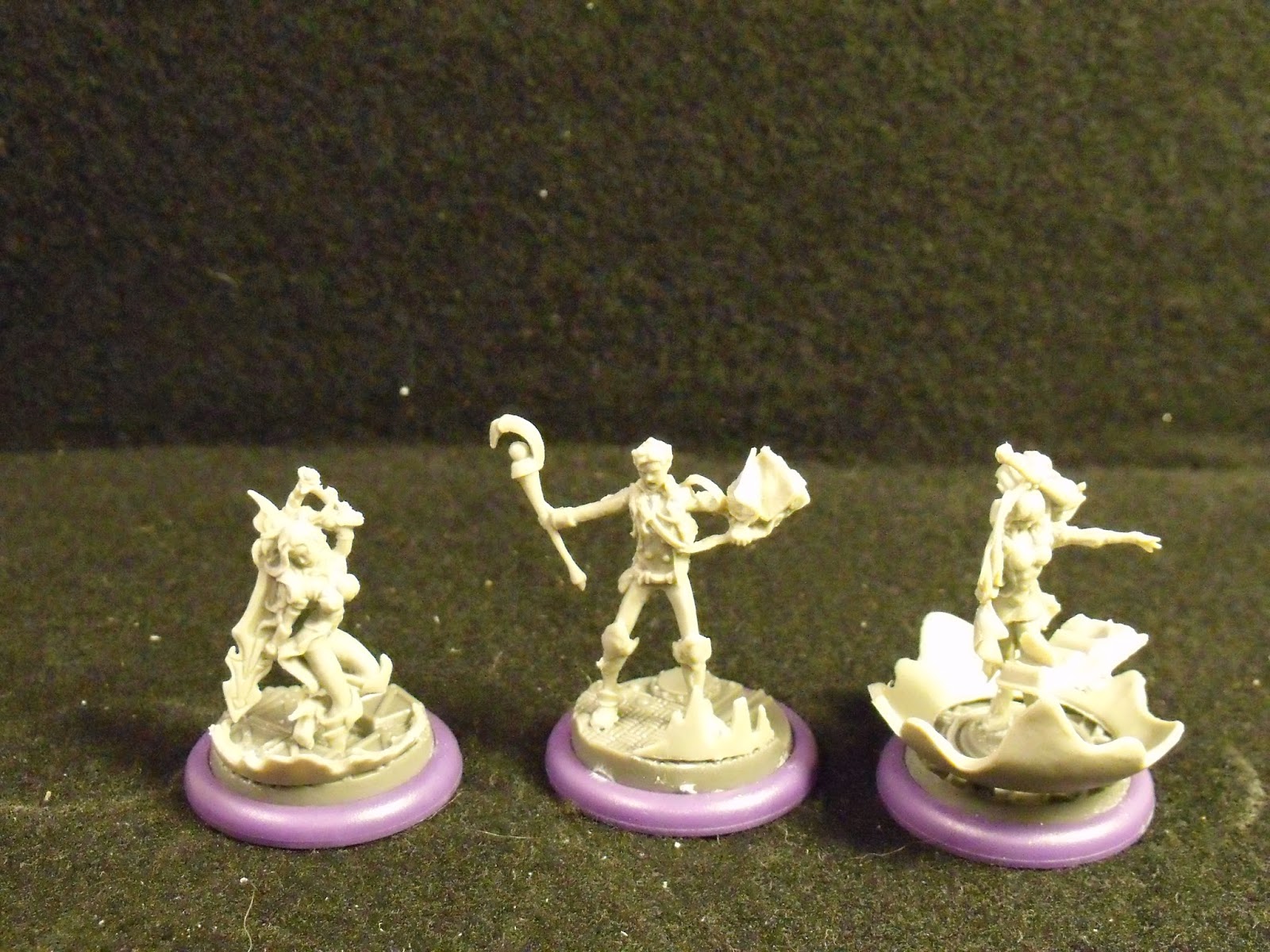 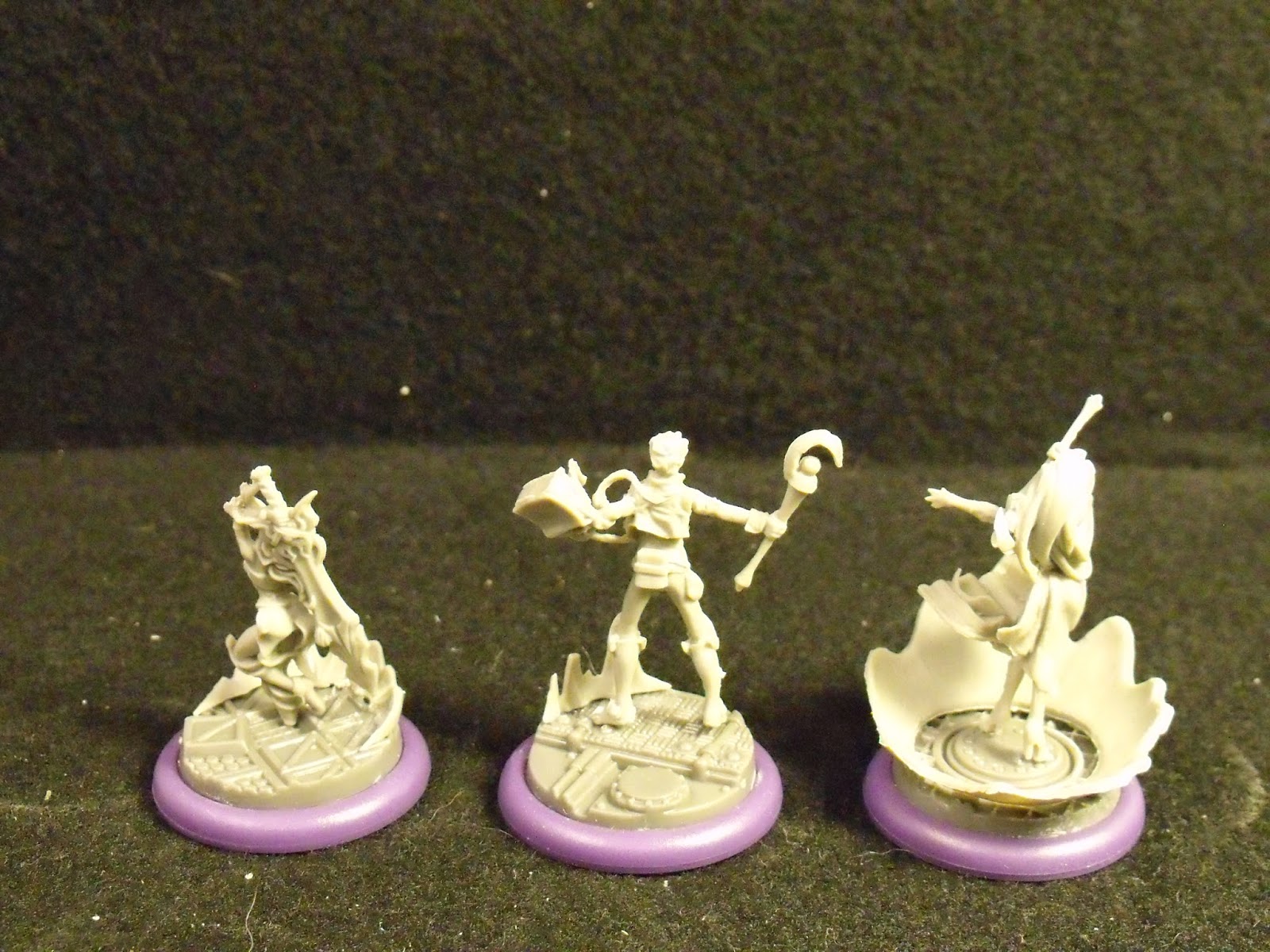 These guys are sweet. I've always wanted to pick up the metal versions of them, but held off after the Kickstarter. I'm glad that they didn't change much or anything about them and that they came with their spell effects add ons. My only issue here, is my version of Valeria (the one w/ the sword) is missing a foot. It would seem that when she was removed from the model they broke it off and it was missed on quality control. So I'll have to mention something about it when I send Soda Pop the notice about missing/ bad pieces.

And that's it! Doctrine was the last faction I had gone all in for and I'm mostly pleased with everything. There were some quality issues here, and a few variations in model size. But overall I really like how the Doctrine models look and feel compared to Cerci and Black Diamond. I'm hoping that the tongue in cheek humor of these models won't turn off my buddies about them. Most of them don't like anime and as such anime humor and tropes are alien to them. But I think things like the Librarian, Academy Guard, The Prefects and Kisa could get them to look passed it. If not, more mages for me!

Tomorrow, it's on to the final faction. This time we'll be looking at the Noh Empire!
Posted by Scott Ferguson at 12:00 AM
Email ThisBlogThis!Share to TwitterShare to FacebookShare to Pinterest
Newer Post Older Post Home