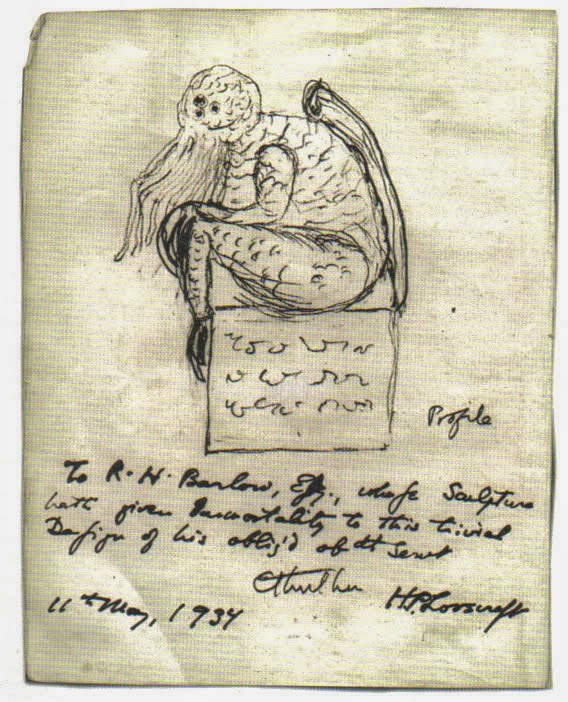 The last stretch goal for the first Bones Kickstarter by Reaper was a massive C'thulhu miniature. The entire backer base went wild over it, and I was one of them. It was so hectic that we broke the Kickstarter servers and I was lucky to get it into my pledge before the timer ran out (little did I know, that they were going to let us add more to our pledges in the pledge manager). This is the first of the large figures I've painted from the Bones campaign rewards I received, and I'm super pleased with the end result. 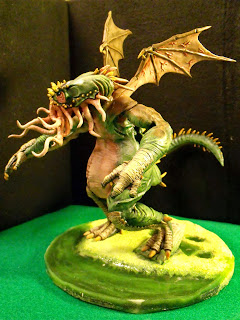 C'thulhu was an interesting challenge. I'm used to painting small figures, but this guy is massive! A standard size human figure stands up to about knee height on him and as such I had to develop a different set of skills when dealing with the larger surface area. Also since he's a "animal" and not just a single skin tone, like most human models, I had to think of the skin more like lizard skin. 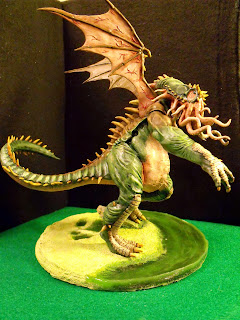 I knew I wanted his main body to be green, but I didn't want the wings or the underbelly to be green. Instead, I had planned from the beginning that his wings would be brown and his underbelly would be the same pink has his "face". This lead to an bit of a new challenge for me and I knew I'd need to gradiate the colors so that they flow more naturally together.

After the main base coats were down, most of the skin was dry brushed on to help pick out the wrinkles and folds in his skin. I started with the greens, then moved to the browns and finally the pinks. Near the edge of the colors, I went along the edges with a piece of natural sponge to help with blending the line. I think this helped the look of his skin very much. 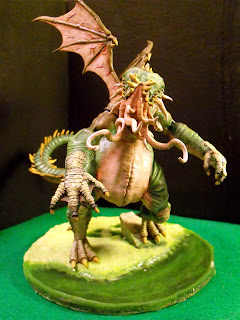 In order for the colors to blend nicely I attached the arms and tail to the body and worked the entire area as one. The wings and head were left detached, to allow for easier work-ability. The head itself was an a slight pain to deal with, since the Bones material is pliable and likes to wiggle when pressure is applied to it. Thus I was chasing the tentacles around while I attempted to paint them. But I think they turned out well. 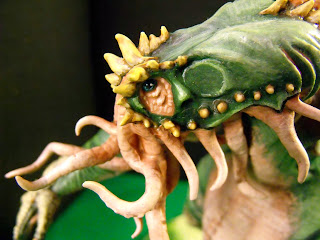 My favorite part of working on the head was the eyes. This is the first time I've really gotten to work on larger eyeballs (SDE minis don't really count here, since it's a different style). I knew I didn't want it to just be a black orb with a light dot and some gloss on it. So I took some Turquoise paint and painted the eye itself. Then I painted a star shaped pupil with black paint. This was followed my some turquoise mixed with white for some lighter sections around the star. Then finally a white dot for reflection, some black ink for depth and finally some gloss varnish for reflectiveness. It turned out awesome and really gives him some life. The first thing I get out of people when I've shown it is "that's creepy". Job well done, I'd say. 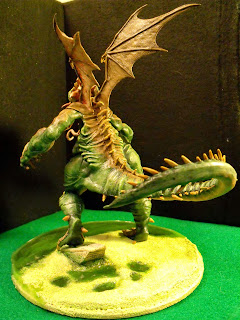 All the spines, and talons were painted using a trick I've developed over the years for painting bone. It's really simple and ends up looking nice once it's done. Currently it's done using a base coat of GW Graveyard Earth, GW Rakarth Flesh and Army Painter Skeleton Bone. This is then followed with a wash of GW Gryphonne Sepia. I've used variations of this for years, but once I run out of  Graveyard Earth and Gryphonne Sepia, I'll need to find replacements. Since Games Workshop completely changed their paint line. 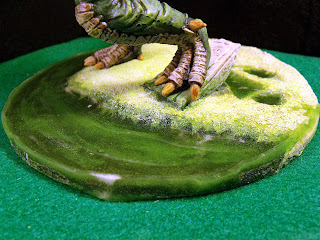 The wings were a cake walk. The hardest part of them was blending the colors of them into the body. But once that was figured out, it was all pretty smooth. The back of the wings are brown and the underside is pink, like the head and underbelly. The veins in the wings were painted with Reaper Blood Red, watered down slightly so that it looks like it's slightly sheer, allowing the pink to show through a bit. I'm always slightly worried about wings though. I have some experience with them, but I always second guess myself about them until they are finished.

For the base, I knew I wanted him to be standing by the water. Kind of a nod to him awakening in the ruins of R'lyeh near the end of the story. I attached his base to a wooden plaque, then using Crayola Air Dry Clay I formed the beach area along with a few extra puddles. This was then covered in sand and painted with tans and beiges, before I then added in some greens for an algae effect. Once the paint was dry I wrapped tape around it and mixed up some resin mixed with green paint and ink. This was then poured into the "ocean" and puddles to make water effects. Once the resin was dry, I followed it up with some gloss varnish to simulate ripples in the water, it turned out ok, but I wish it would have worked out better.

And with that, C'thulhu is completed! I figure that I have close to 40+ hours into this one. This is the first real big miniature I've painted to date and I couldn't be more happy with it. But I am looking forward to working on something smaller soon, it's more in my comfort zone. But maybe once day I'll pull out Kaladrax or Nethyrmaul and knock them out. I have a few ideas for my next project, but we'll see what I decide on in the next few days.
Posted by Scott Ferguson at 12:31 AM
Email ThisBlogThis!Share to TwitterShare to FacebookShare to Pinterest
Newer Post Older Post Home