Space demons! Interstellar ogres? Overall brutes and badasses, that is all. The Noh Empire is one faction I wasn't sold on originally. They seemed kinda, meh. But when it came time to pick a fourth faction for the Kickstarter rewards I finally decided on them, and it was a tight race with the Corsairs. I didn't go all in on everything for these guys and it's actually something I kicked myself for later. After seeing the previewed models after the Pledge Manager had closed, I wish I had been able to pick up more of these guys. As it stands currently, they are not only the faction I have the minimum reward for, they are also the one I have the least options for, play wise. 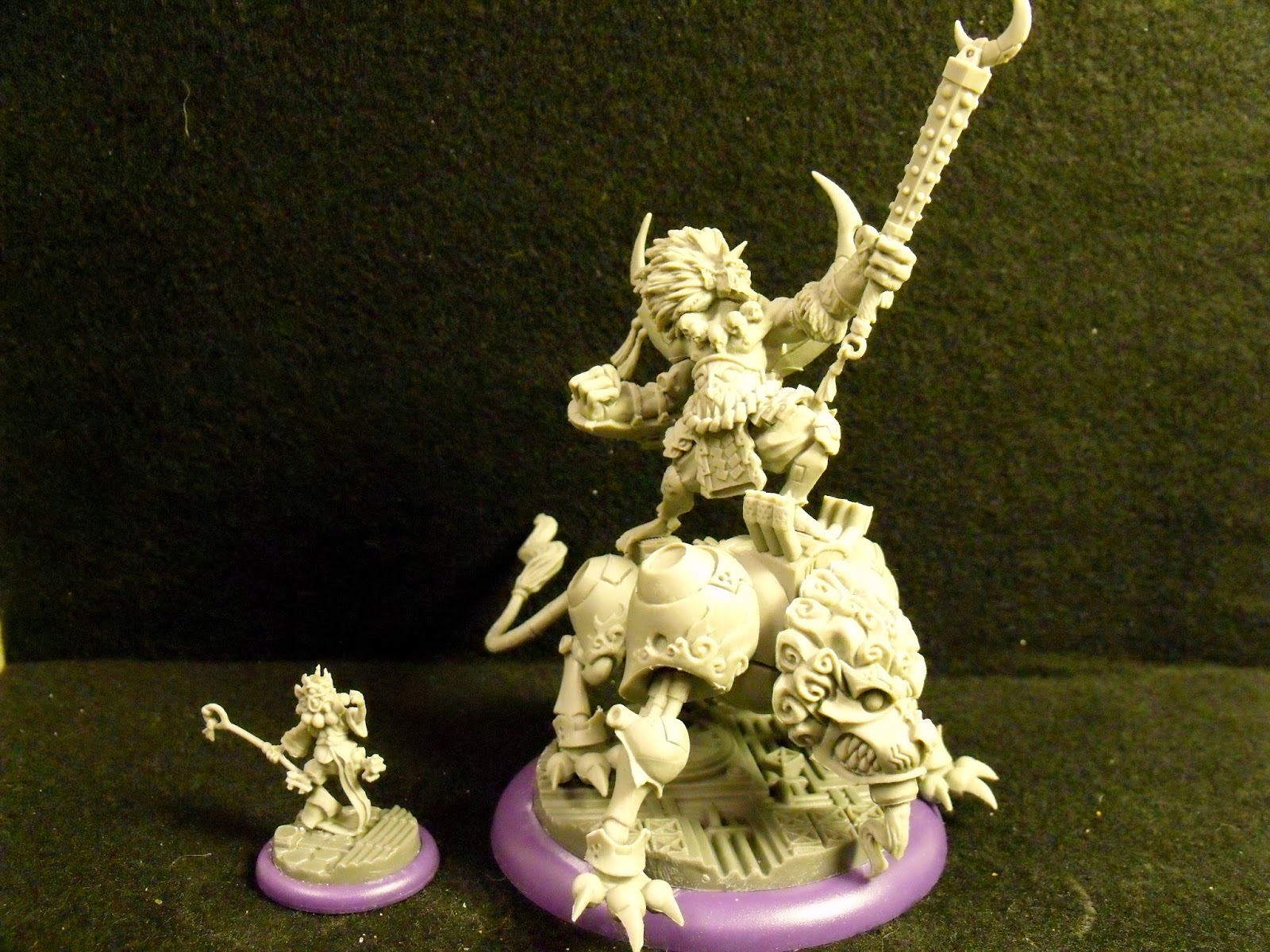 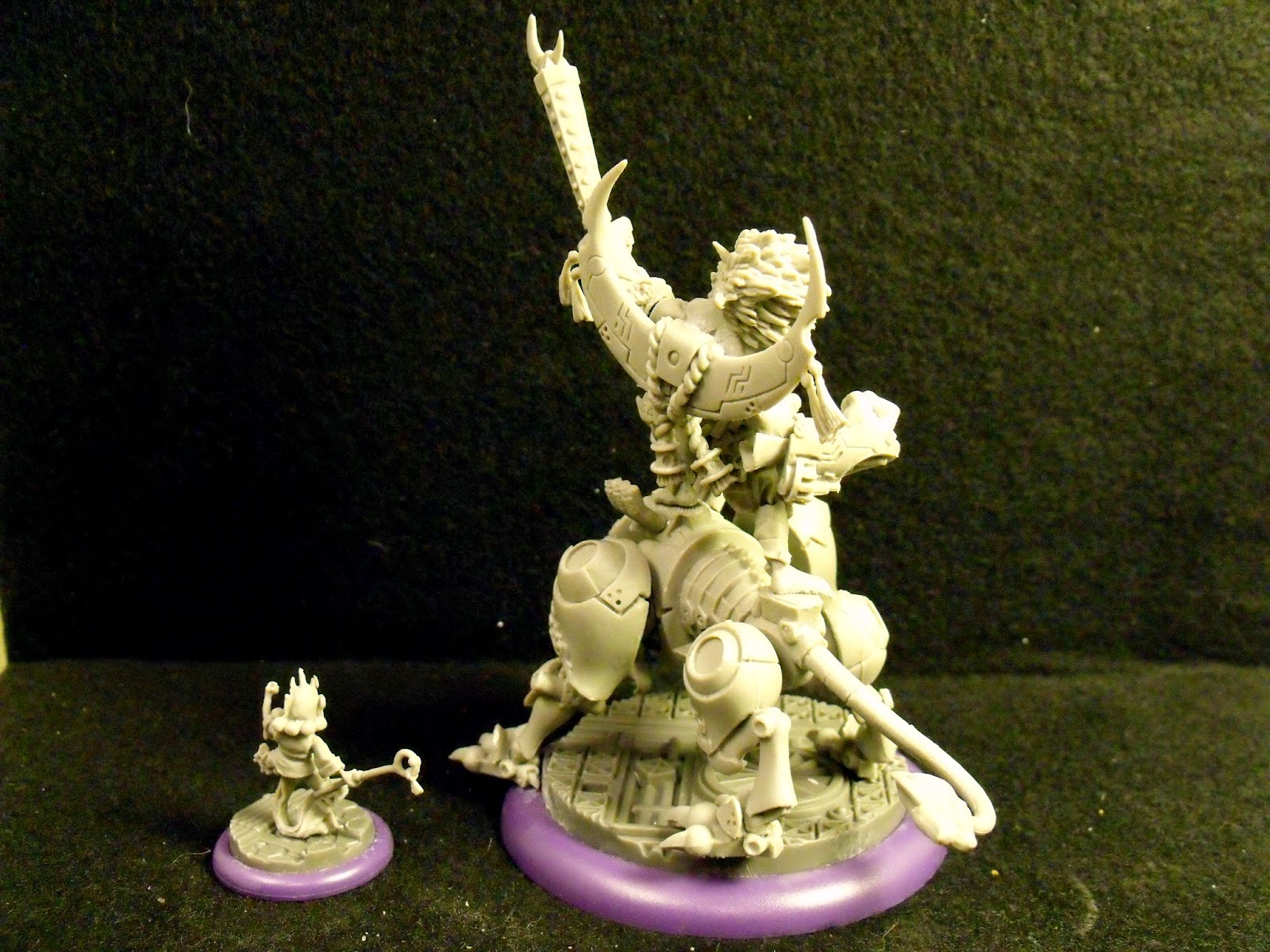 I believe Kasaro To is the largest of the Relic Knights. His Relic is also one of the cooler ones out there, it's a Foo Dog, which is neat and lends itself nicely to the whole Oni vibe the Noh have going on. His Cypher, Azi, also feeds into this very well too. Overall Kasaro To was pretty easy assembly wise. the only problem I ran into was fitting the feet onto the legs of the Relic. They didn't seem to be set for a particular order or placement and I ended up waiting to attach them until I was ready to put him on the base insert, and then the Relic's stance was too big for the base, and he hangs off of it. It was then that I decided that I would eventually do thematic bases for each faction and sideline the base inserts. 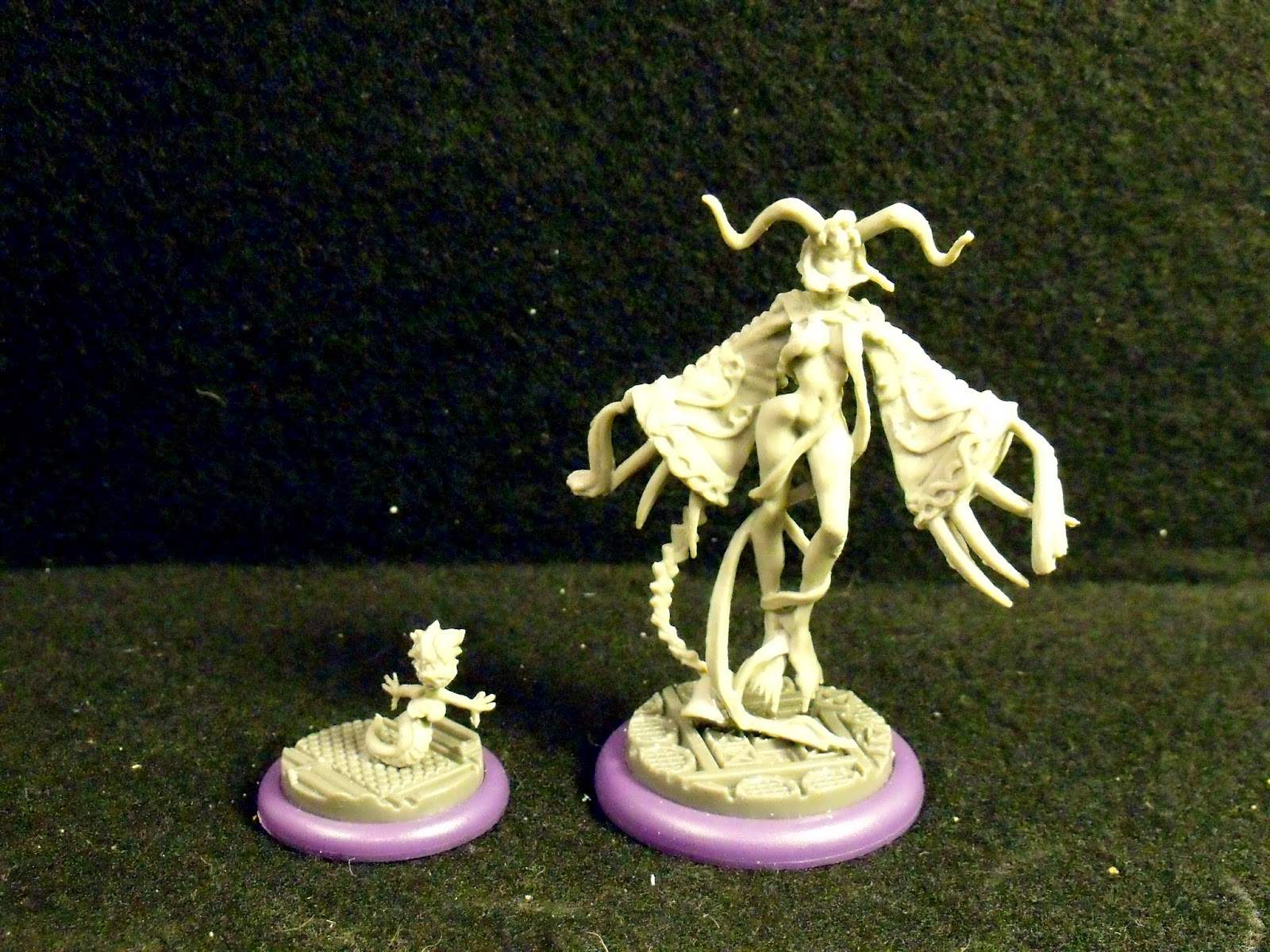 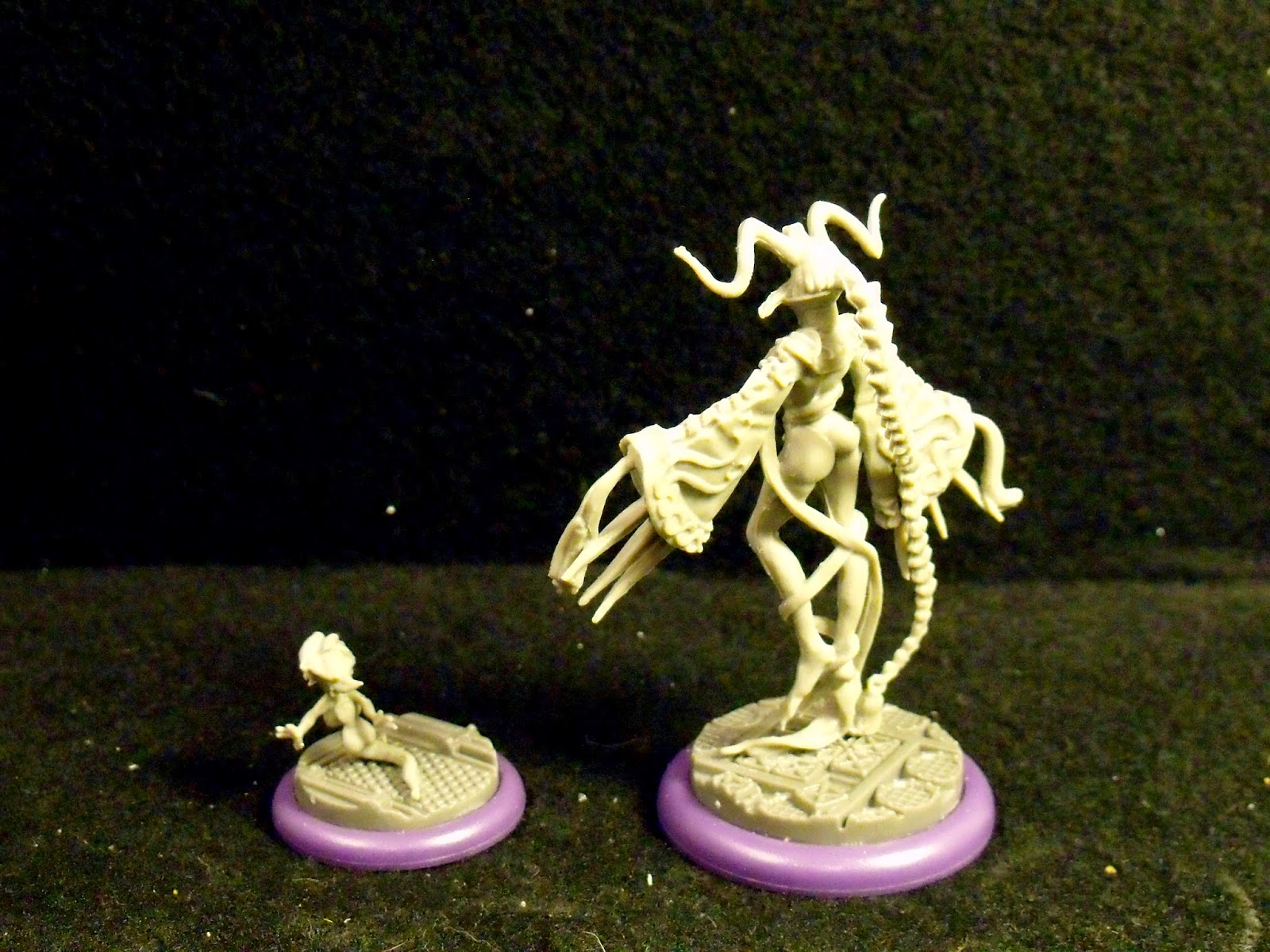 If you thought the Doctrine had issues with "cheesecake" and inappropriate content for minors... say "hello!" to Zineda! That's right, her main attire is a couple of sleeves and a ribbon! Yeah buddy. She's the Questing Knight included in the Noh's Battle Box too. And folks were up in arms about it all over the place, but good on you Soda Pop for not bowing to censorship. No lie, I went with Noh for 2 models. The first was Kasaro To and the second was Zineda. They are both awesome models and I think some of the most iconic in the game. I just hope I can get the light purple skin tone right when I finally get around to painting her. 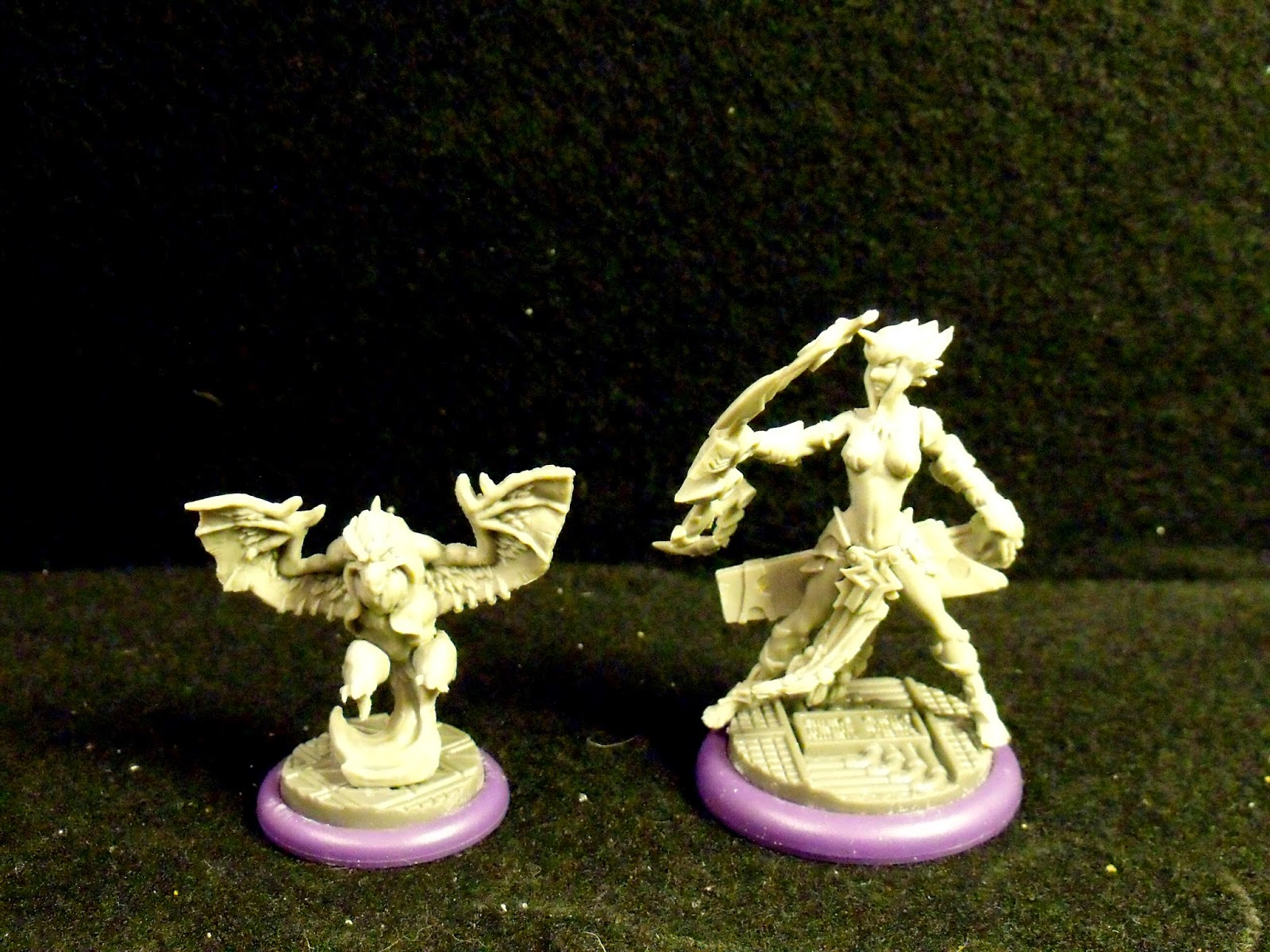 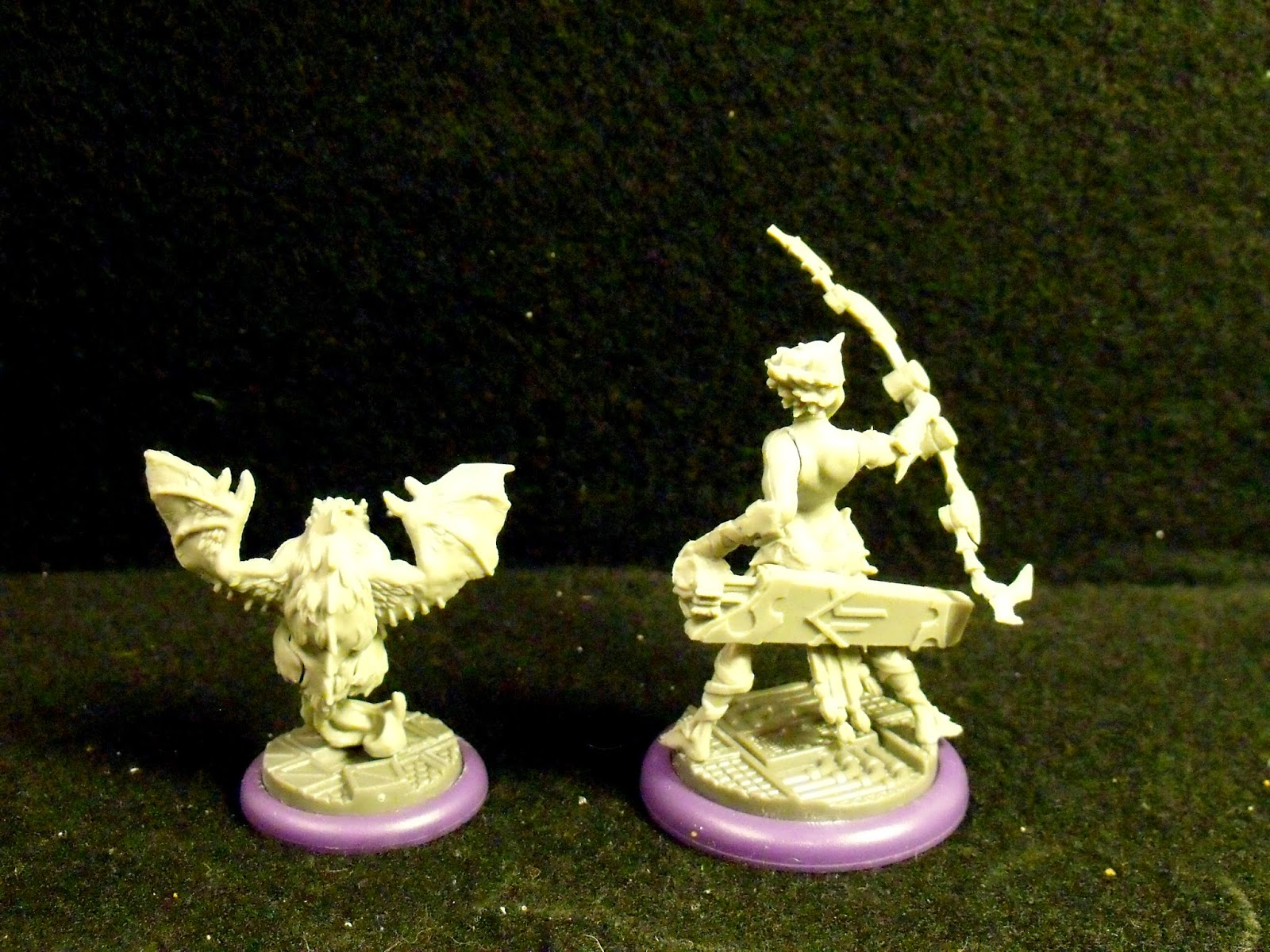 I have mixed feelings about Marikan To. Originally, she was just a unique unit for fielding in the game. But at some point (I don't remember when) She was upgraded to a Questing Knight instead and given her own Cypher. This really limits what you can do with the base pledge of the Noh Empire. because now you have 2 Questing Knights and a Relic Knight, and 2 Squads of Berserkers and 2 Renders. Meaning every time we field Noh in our games, the only option the player using them has is which of the 3 Knights to run with.... fun. Overall I really like her model, but she suffers from the I-don't-fit-on-my-base issue too. My model's bow was broken on one end, but still attached, so I had to dab some glue on it and bend it into place, gently. And her Cypher is kinda meh, I'm not really feeling it and it seems kinda not all that great. I really would have liked her to have stayed a unique archer unit, rather than a Knight. 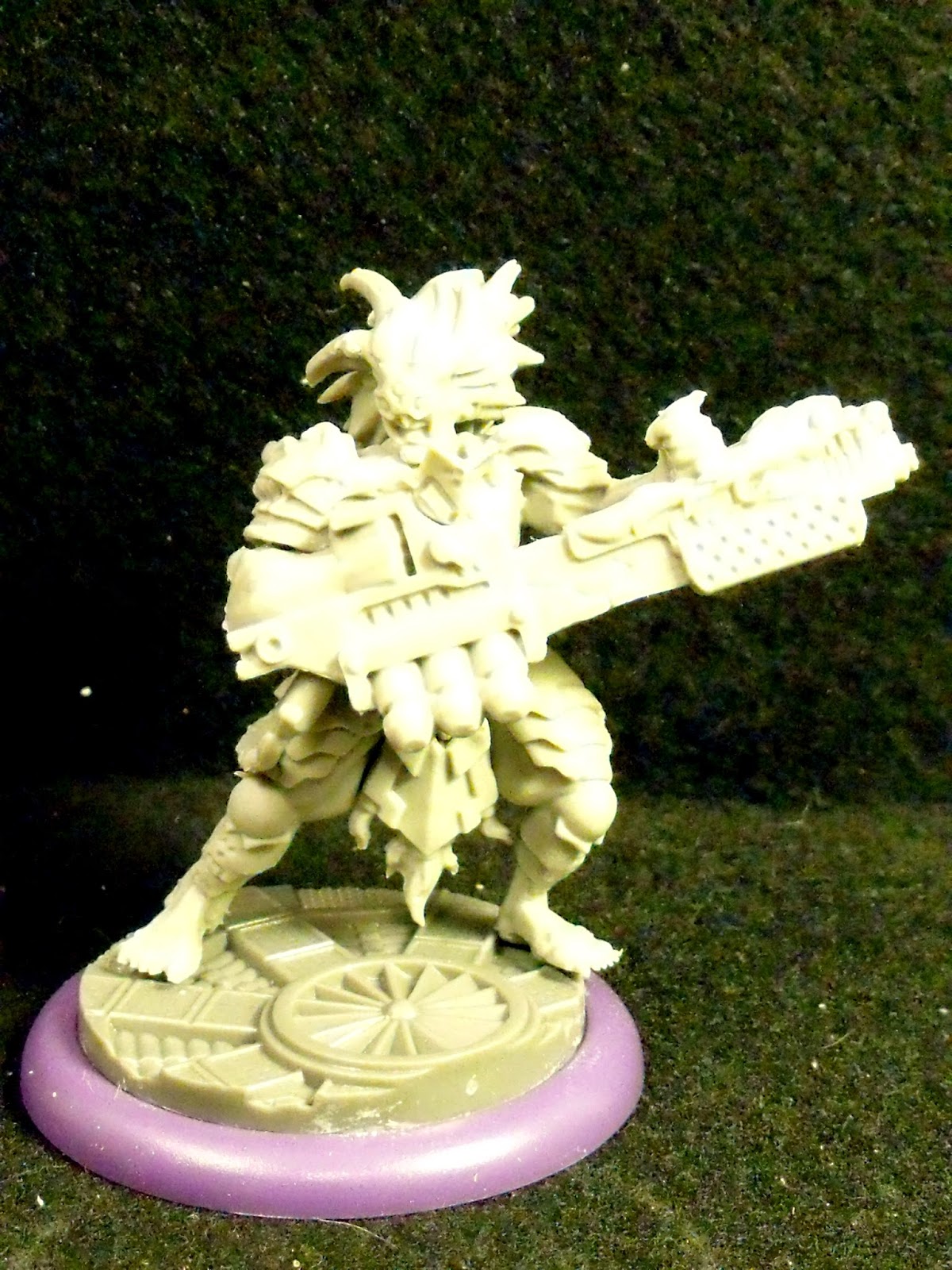 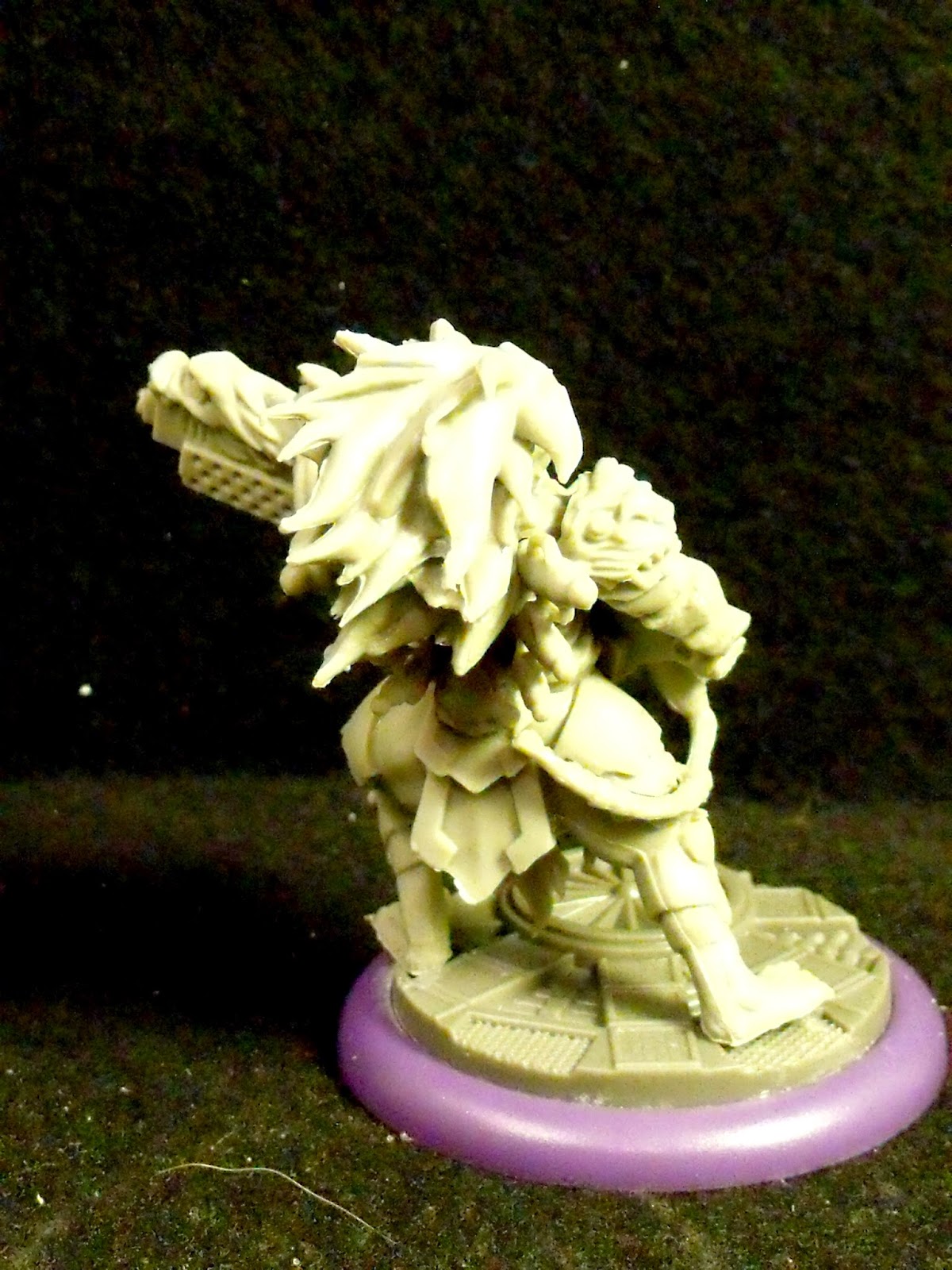 The Render is the only Single Unit I have available to me. He's pretty sweet and wields are laser cannon. Like all the Noh, he's really simple to assemble and thanks to his size clean up seemed to be a snap. On the rear of his leg, there is a cord for his cannon to attach to his power pack, that was the only part I had problems with lining up. But after playing with it and some patience, I was able to get it in place no problem. 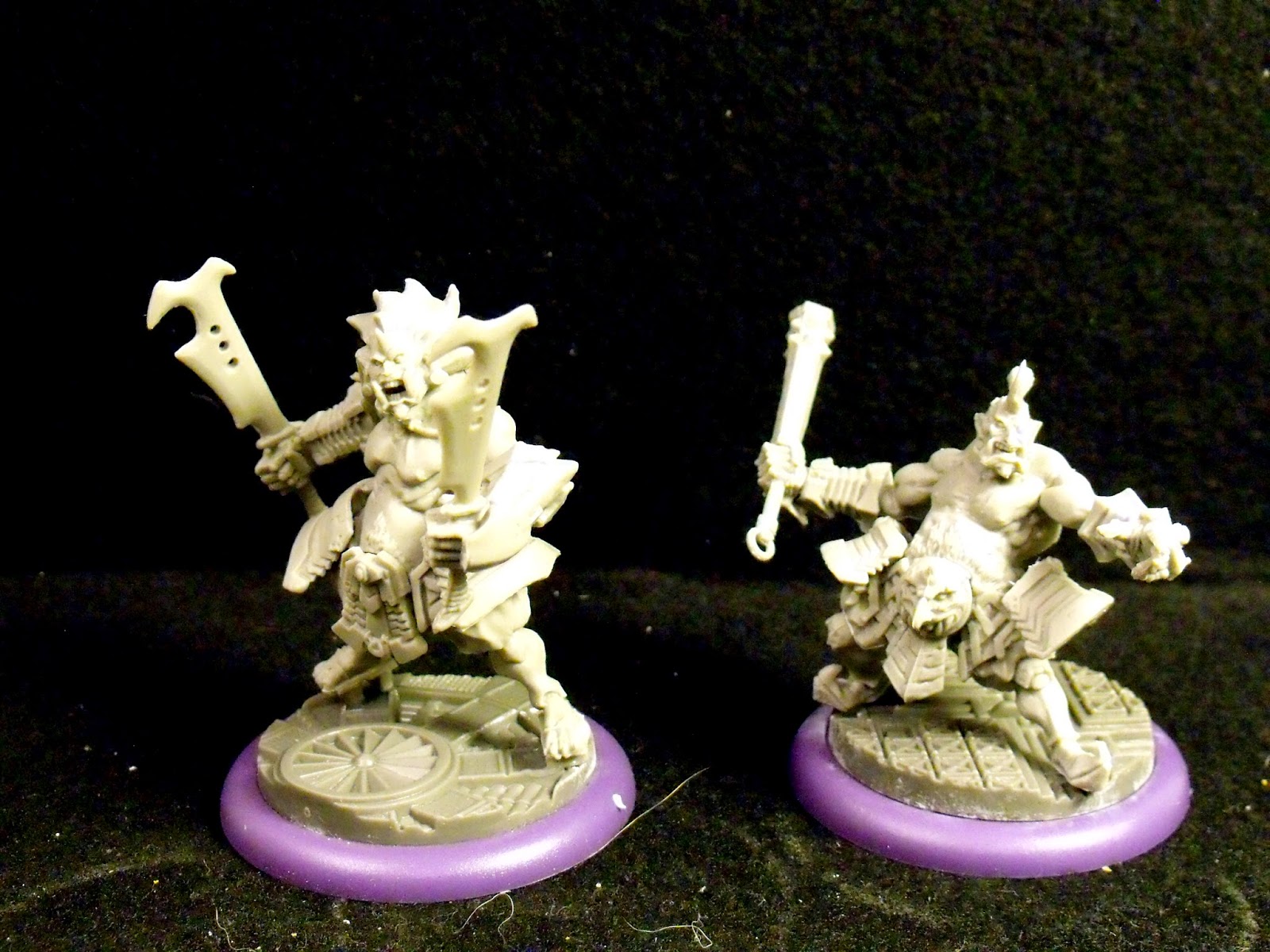 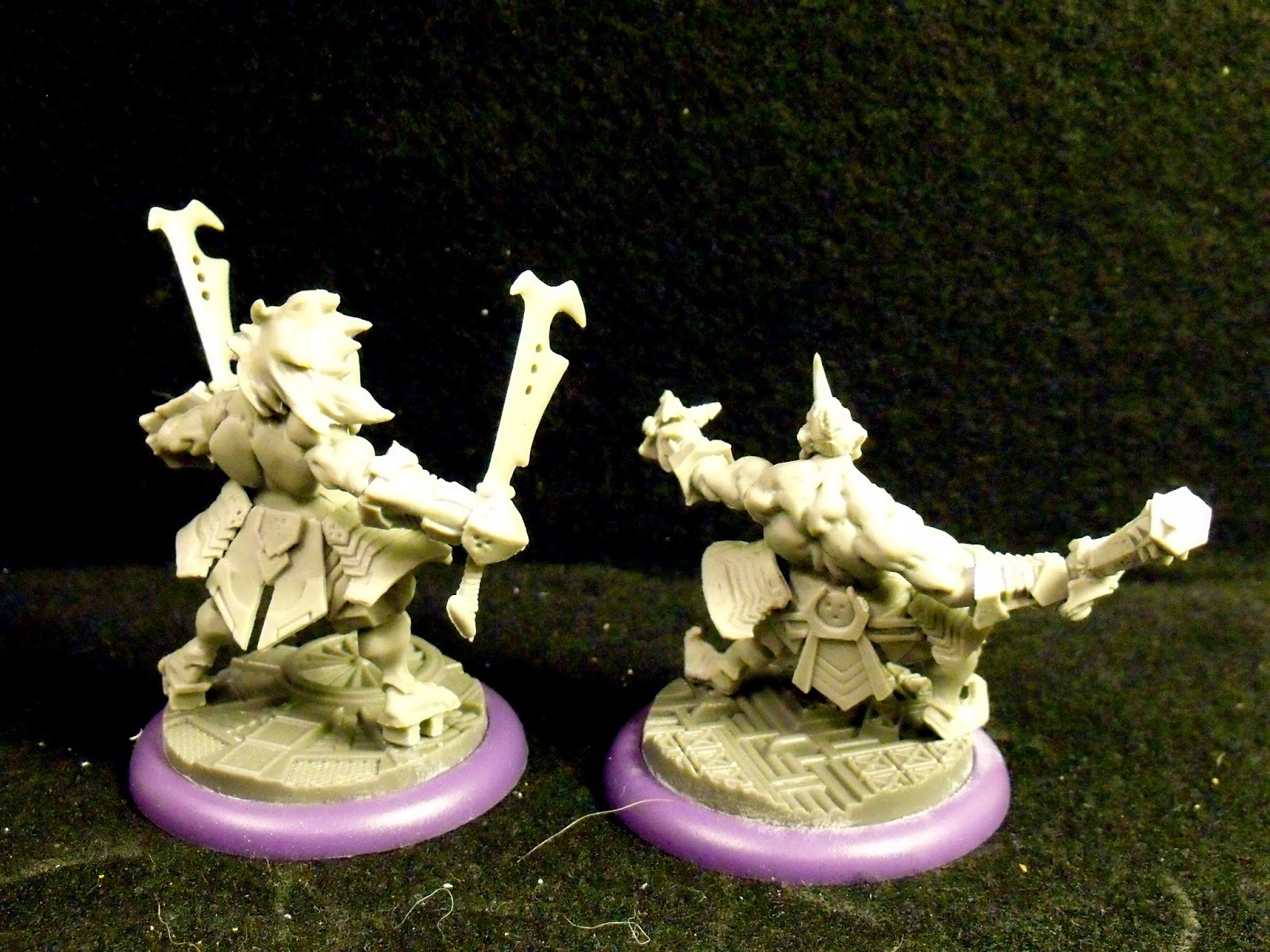 The Kyojin Berserkers are both really cool figures, though I'm partial to the one with the bat-like mace. At first I thought I was missing one of the loincloth pieces of armor on one of the models. But it happened to get stuck inside the box, so that was a bonus. These guys were fun to assemble and really easy, all the keyway slots were easily recognizable and didn't require a lot of playing around and guess work. Again clean up looks like it'll be a cake walk, thanks to the size of these guys.

There you have it, all of the regular factions I pledged for in the Relic Knights Kickstarter. I really wish I had went in for more of the Noh Empire, but it's ok, I'll just have to pick up the missing parts when they go retail. I'm pretty confident that they will be one of the factions that is chosen by my friends more often. As everyone likes big brutish monsters that look like they can knock you over with a single finger.

The week of Relic Knights isn't over yet though! Check back tomorrow for the Prismatics!
Posted by Scott Ferguson at 12:00 AM
Email ThisBlogThis!Share to TwitterShare to FacebookShare to Pinterest
Newer Post Older Post Home