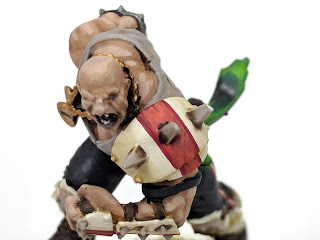 I painted Zugg over a year ago now. He was meant to play alongside the Tri-City Sentinels as a Star Player and he was the first of many Blood Blow Star Players I bought.

I painted him just before Adepticon, and was planning to meet up with some friends to play games of Blood Bowl. But Adepticon being a social gathering that it is, those games never happened. My interest in playing Blood Bowl then waned considerably and I sold off most of my unpainted Star Players and the unpainted, unassembled Dwarf and Skaven teams.

Since it was so close to Adepticon when I finished him, I didn't write up a post about him. So, we're fixing that today.

I give you, Zugg star of the Tri-City Sentinels!